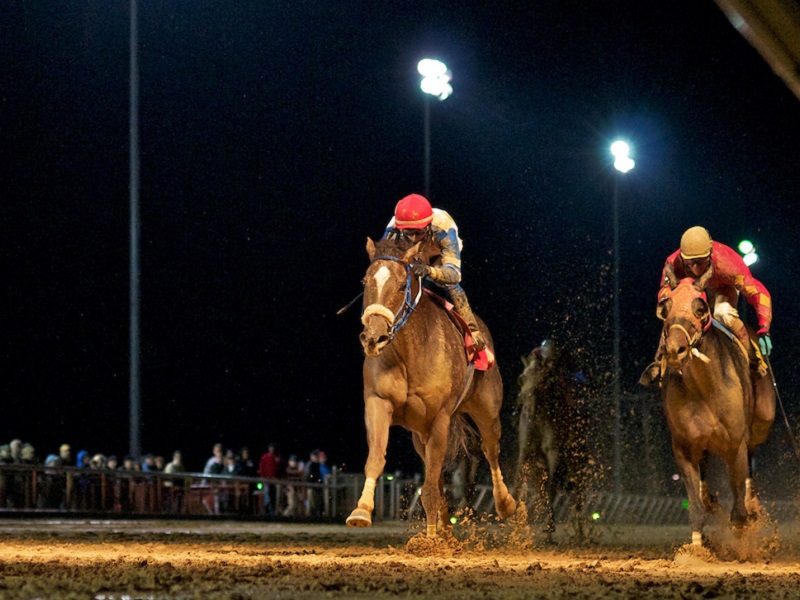 Nighttime racetracks take a bad rap in the industry. The stigma of crooked racing and even more crooked conformation of its horses permeate perception. Many think it’s where degenerate gamblers and action seekers go, far beneath the intellectual righteousness of ‘investing’ wagering dollars in Kentucky, New York or California.

And while varying degrees of all that can be true, the bad rap comes in that night racing’s outside perception stops at that point. But beyond Sylvester Carmouche reappearing from the fog or a $6,000 superfecta pool, nighttime racing has been a proving ground for many elite horsemen and industry-wide ideas. While elites and casuals consider these tracks to be where slow and damaged horses literally fade after sunset, it’s wise to consider the developmental-league aspects that they also project forward.

One such developmental idea currently being employed at night is the cooperative effort among tracks to coordinate post times. Track officials at Charles Town, Penn National, Delta Downs and Turfway Park are working together to avoid overlap. The January meet at Sam Houston also will move in synchrony with those evening simulcast signals.

From a bettor and fan standpoint, it’s a “no-duh” type of experiment. We’ve long bemoaned seeing two, three and four races overlapping. That’s not a problem exclusive to nighttime; we get that on a Saturday afternoon even among graded stakes. The racetrack measurement for such an experiment, of course, will be handle, not the fan experience. Does moving your post time from A to B impact the evening’s handle positively or negatively?

Right now, the optimistic view is that it will help everyone. That may or may not be true. The dominant signal in the time slot could remain just as strong, or perhaps will relinquish some of its market share by politely waiting on less-dominant circuits. We won’t know after a week or two, so the patience to see this out over a longer period of months will be fascinating to follow. It could also change the way we operate during the afternoon.

There have been occasional olive branches extended between circuits like NYRA, Gulfstream and Keeneland to alleviate running on top of one another. But my casual observance hasn’t found that to be widely embraced or adhered to. Just like a major takeout reduction, everyone’s afraid to see what the bottom line impact will be. Takeout reductions have been limited and short-term, likely losing any real study size from which to draw conclusive conclusions. You don’t want to be the racing executive on the wrong side of that; a pink slip would surely follow.

The idea of coordinated post times, which seems so logical on the surface, just might now get enough data to study. Most all of the tracks taking part in the co-op are supported financially by alternative gaming, so their risk to the handle bottom line may not be as cut-throat as some of their more famous daytime brethren. In other words, they may have enough cover to run this experiment long enough to see actual positive or negative indicators. And while we’re at it, why doesn’t an organization like The Jockey Club subsidize tracks like these to conduct industry-wide experiments that the bigger circuits can’t or won’t take the risk? It would be remarkable for TJC to spend its marketing dollars subsidizing a takeout reduction for a particular track so we can get real-world answers to its impact. That seems better spending than another racing telecast ad buy on a third-tier network.

If successful coordinating post times, the nighttime tracks will once again provide the overall industry with a step in the right direction. It wouldn’t be the first time. Colored saddle towels once were so disdained by racing’s elite that they were akin to carnival barkers. Only poor nighttime tracks used them, while the afternoon aristocracy was convinced that bettors and fans had a moral obligation to memorize the colors of the Phipps, Whitney and Calumet silks. The first Kentucky Derby winner to wear a colored saddle towel was not until War Emblem in 2002. The Breeders’ Cup didn’t give in to the apparently ghastly fashion faux pas until 2009. Something as fan-friendly as that took a half-century to institute … and it didn’t affect handle.

No doubt nighttime racing has earned some of its knocks. But it’s also an easy target. A waffling and fading racing press pulls no punches in calling out its warts because it does not depend on nighttime tracks for advertising or access to its big events. Instead, the industry stakeholders tend to protect their own under the sunshine, while using the nighttime tracks as a place to show how heavy-handed their justice can be, and to fulfill their own sense of self-policing righteousness.

So it’s under that historical backdrop that we closely watch how the nighttime signals work in unison over the next several months. In an industry where everyone will line up to take credit for success, if the concept of coordinated post times becomes a national norm, at least you’ll know where it began. For all of their evil-eyed stares from the industry, this is just another reason why horse racing needs its nighttime brethren.