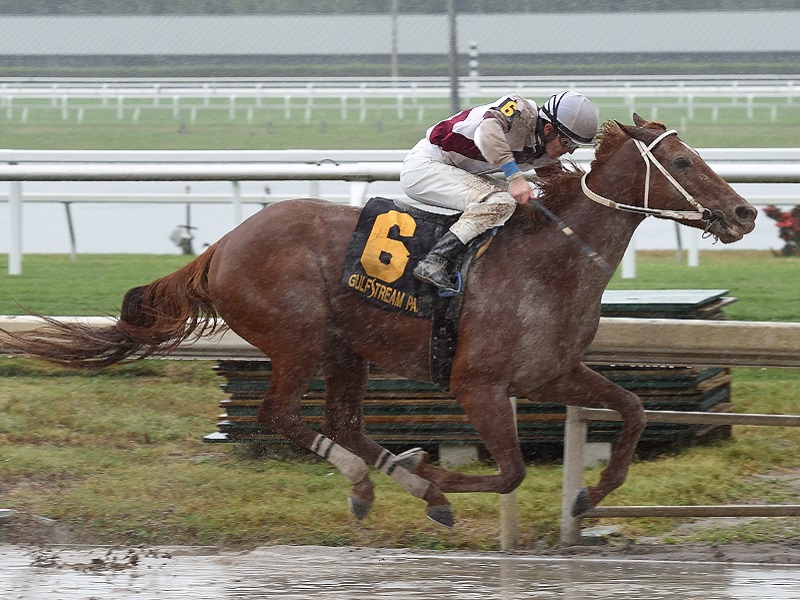 There is no thing as a sure thing, a reality that was reaffirmed when Audible finished second as a 1-10 favorite to 25-1 Sir Anthony in last Saturday’s Harlan’s Holiday Stakes.

The Grade III Harlan’s Holiday was contested on Gulfstream Park’s sloppy main track. Audible went into the 1 1/16-mile race having won five of his last six starts. His lone defeat during that sequence had come when he finished third in the Grade I Kentucky Derby on a sloppy track last May 5. Good Magic, the Eclipse Award-winning 2-year-old male of 2017, edged Audible by a head for second in the 1 1/4-mile classic. Justify won the Run for the Roses by 2 1/2 lengths and subsequently completed a Triple Crown sweep.

Following the Kentucky Derby, Audible went on the shelf. The 3-year-old Kentucky-bred son of Into Mischief returned to the racing wars on Nov. 3 at Churchill Downs when he won the seven-furlong Cherokee Run Stakes by two lengths.

Javier Castellano rode Audible in the Harlan’s Holiday for trainer Todd Pletcher. It was the bay colt’s first start against older foes. Next-to-last early in the field of six, Audible rallied while wide on the far turn to bid for command coming into the stretch. But when Castellano asked Audible more than once with the whip right-handed turning for home, it became evident that the big favorite might be in big trouble.

Meanwhile, Sir Anthony was rallying along the inside rail coming into the lane after trailing through the early stages. He resolutely kept to his task down the stretch and won by a half-length while putting a final time of 1:45.14 on the board. Audible had to settle for second. Apostle ended up third at 20-1, one length behind Audible.

Pletcher felt that Audible did not run his best on the wet Gulfstream surface. In Mike Welsch’s Daily Racing Form recap, Pletcher said Castellano told him that Audible struggled with the wet track from the outset.

“It looked like he was kind of fighting it the whole way,” Pletcher said. “He always seemed to be working harder than he should have.”

Including last year’s Kentucky Derby, Audible now has lost both times he has competed on a wet track.

As for Sir Anthony, the Harlan’s Holiday was his fourth consecutive win. It was the first time that he had competed in a graded stakes race.

Sir Anthony’s currently winning skein began when he pulled off a $72.20 shocker in Arlington Park’s Bruce D. Memorial on synthetic footing Aug. 11. That was followed by back-to-back wins on the dirt at Hawthorne prior to his $53.80 upset on the dirt in the Harlan’s Holiday.

Sir Anthony was assigned a modest 84 Beyer Speed Figure for his Harlan’s Holiday victory. That the bar was not set any higher than 84 and Audible could not win was not a good sign for him, any way you slice it. Audible had recorded a 99 Beyer in four straight races going into the Harlan’s Holiday, but dropped all the way to an 83 last Saturday.

These are the Beyer Speed Figures for winners of the Harlan’s Holiday going back to its inaugural running in 2011:

GLORIOUS EMPIRE REBOUNDS FROM BC DEBACLE

After being eased in the Grade I Breeders’ Cup Turf at Churchill Downs on Nov. 3, Glorious Empire regained his winning ways in the Grade II Fort Lauderdale Stakes at Gulfstream Park last Saturday.

Glorious Empire led early in the BC Turf before faltering badly. When Glorious Empire seemed to have trouble handling the wet grass course rated as good, jockey Julien Leparoux “took care” of the 7-year-old Irish-bred gelding by easing him, according to trainer James Lawrence.

In the Fort Lauderdale, Glorious Empire again had to run on a wet grass course classified as good. But this time the son of Holy Roman Emperor handled the less-than-firm course just fine. Leading from start to finish under Hall of Fame rider Edgar Prado, Glorious Empire prevailed by 2 1/2 lengths at 7-1. Qurbaan finished second at 6-1. Hi Happy came in third, three-quarters of a length behind Qurbaan. Almanaar, the 7-2 favorite in the wide-open field of 13, finished sixth.

Glorious Empire, who races for Matthew Schera, now has won four of six starts in 2018. His only other loss this year besides the BC Turf came when he ran sixth in the Henry Clark Stakes at Laurel on April 21 in his 2018 debut.

These are the Beyer Speed Figures for winners of the Fort Lauderdale going back to 1993:

Justify won the Triple Crown this year, but someone else has registered the highest Beyer Speed Figure by a 3-year-old so far in 2018.

World of Trouble, a 3-year-old Kantharos colt, was credited with a 118 Beyer in the Grade I BC Turf Sprint at Churchill Downs. That is the highest Beyer by a 3-year-old so far in 2018.

But when World of Trouble recorded his 118 Beyer Speed Figure in the BC Turf Sprint, he did not win. He finished second, a neck behind veteran 6-year-old gelding Stormy Liberal, who also had won the Grade BC Turf Sprint at Del Mar in 2017.

Just how well did World of Trouble run in defeat at the Breeders’ Cup? He wound up 7 1/4 lengths clear of third-place finisher Disco Partner, an especially large gap in a 5-furlong grass dash.

Stormy Liberal was assigned a 119 Beyer Speed Figure for his BC Turf Sprint victory. That 119 Beyer is the biggest figure of the year to date on the grass. It also is the second-highest Beyer of the year on any surface, exceeded only by Gun Runner’s 120 when he won the Pegasus World Cup on the dirt at Gulfstream in the final race of his career.

Off in alert fashion, World of Trouble carved out fractions of :22.19 and a rapid :44.96 while setting the pace. He effortlessly splashed far away from his opponents to boast a commanding 11 1/2-length advantage at the eighth pole while posting a six-furlong split of 1:09.34. World of Trouble then was allowed to coast late after being taken in hand, yet still completed seven furlongs in a splendid 1:22.50 as a 1-5 favorite.

Owned by Michael Dubb, Madaket Stables and Bethlehem Stables, World of Trouble has won four of seven starts this year.

“I was concerned about the [sloppy] track; I didn’t know what to make of it,” Dubb said in the BloodHorse’s recap of World of Trouble’s win last Saturday. “He is such a special horse, and we are on such a special ride with him, you have to just pinch yourself and hope he keeps going.

“He can sprint on dirt and he can sprint on turf, and the real question is, do I look down the line to go from seven furlongs to a mile or longer as he gets older and gets more relaxed? It’s a great problem to have.”

The next race for World of Trouble, according to Servis, will be the Gulfstream Park Turf Sprint at five furlongs on the Jan. 26 Pegasus World Cup undercard.

Santa Anita Park, aka the Great Race Place, will kick off its winter meet next Wednesday, Dec. 26. Fans attending the opener once again will receive the popular Santa Anita wall calendar, free with paid admission.

Along with those three Triple Crown winners, each month will feature a photo and brief description of past outstanding Thoroughbreds to have raced at Santa Anita, such as California Chrome, Beholder, Zenyatta and John Henry.

The first live race at Santa Anita on Dec. 26 is scheduled for 11:30 a.m. Pacific Time. A pair of Grade I events, the Malibu Stakes and La Brea Stakes, will head the opening-day 10-race program. The card also will include two Grade II races, the Mathis Brothers Mile and San Antonio Stakes.