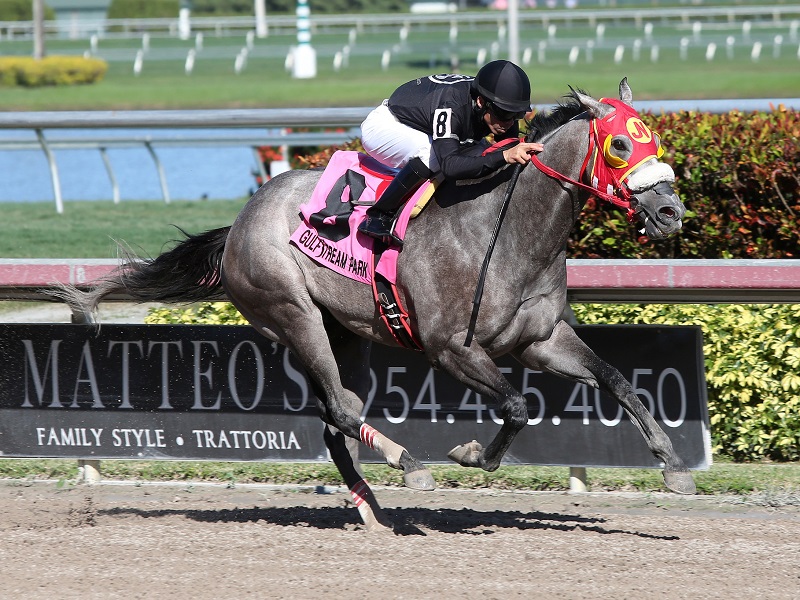 The Sunshine Millions is Saturday at Gulfstream Park and, for those of us living in the path of Winter Storm Harper, should serve as a very welcome distraction from impending cold, snow and rain that is hitting parts of the country.  After all, a little ‘sunshine’ never hurts, right?

No longer the California vs Florida Slugfest that it used to be, the Sunshine Millions is now a $600,000 showcase for the nation’s top Florida-bred horses.   And despite losing the California-breds, this event seems to be as healthy as ever.  Top Florida-breds like X Y Jet, Starship Jubilee, Mr. Jordan and Big Changes are scheduled to run and, as always, Gulfstream’s wager menu is loaded with great opportunities including the 20-cent Rainbow 6, 15% takeout Pick 5’s and exciting Pick 4’s.

In fact, we’re so pumped for Saturday’s races that we’re offering a 1 Million XB Reward Point Split for anyone that hits the Late Pick 4 (Races 9 – 12).

Here are my thoughts on each of the Sunshine Millions races, as well as my Late Pick 4 ticket:

The star of the day looks to be Jorge Navarro’s X Y JET, who has been one of North America’s premier sprinters for the last few years.  A two-time Sunshine Millions Sprint winner, he’s also finished second in the Grade 1 Dubai Golden Shaheen twice and he’s bankrolled $1.5 million in just 22 starts.  The last time we saw him, he won the Grade 3 Smile Sprint here on June 30.  The post position draw may not have been kind to him, though, as he’s a ‘need the lead’ type stuck inside.  If he breaks and gets out to a lead, it’s game over.  But if they pressure him early he could be in trouble.

That’s why RAY’SWARRIOR could be the key to this race.  He just blew the doors off a field in a claiming race here on December 19 and, based on recent fractions, he might be as fast early as X Y JET.  He’s tough to beat when he makes the lead and, given he drew an outside post, he’s in the perfect spot to ‘take it to’ X Y JET early.  It’s hard to envision one of those two of those not winning this, but I’m not willing to just hand this race to X Y JET.

Let’s make the assumption that Brad Cox’s BIG CHANGES races here instead of in the race he’s cross-entered in Saturday at the Fair Grounds.  This is a serious racehorse that is in top form.  He’s 9-for-23 in his career and won three stakes races last year (and five overall) without running at the same track twice.  His passport has stamps from Indiana Grand, Evangeline, Mountaineer, Louisiana Downs, Keeneland, Churchill and the Fair Grounds.  Not too shabby.  If he runs here, he’s the horse to beat.

If this race falls apart early – and there’s plenty of speed signed on, both SECOND MATE and ARCHER ROAD should benefit.  SECOND MATE finished third in this race last year and was just claimed by Jorge Abreu, who does a great job with horses like this.  ARCHER ROAD is 5-for-15 in his career at Gulfstream.

If you’re the trainer of STARSHIP JUBILEE, you’ve got to be wondering if you’re cursed.  Last out, she drew the impossible #12 post in the Claiming Crown Tiara Stakes and, amazingly, she’s marooned further outside this time in post #13.  She’s the best horse in this field, but that’s a lot to overcome.  She won this race last year (from post #4) and won the Grade 2 Canadian Stakes at Woodbine in September.

If ground loss from the outside post gets to her, MRS. RAMONA G. will benefit.  She has won three straight allowance races (and 4-of-6 overall on turf) and will be ridden by Gulfstream’s top jock, Luis Saez.  How far she wants to run is still in question and this will be the longest race of her life, but she successfully navigated 2-turn racing last out.  Todd Pletcher’s PICARA, comfortably nestled in post #2 should also benefit from a ground-saving trip.

The ‘big one’ Saturday attracted a field of eight, headlined by South Florida stalwarts MR. JORDAN and JAY’S WAY, as well as imports DALMORE and FOREVAMO, who will be making their first starts locally.  MR. JORDAN is a remarkable 10-for-34 in his career but is a shocking 1-for-17 at Gulfstream, including two runner-up efforts in this race.  He’s not quite as good as he used to be (he’s seven after all) but he’s still in sharp form.  JAY’S WAY won this race last year but his completely out of form.

DALMORE racked up the frequent flyer miles last season.  He raced in California, Arkansas, Iowa, New York, Kentucky and Maryland and was twice a runner-up in a stakes race.  He’s a solid performer with a big heart and he should benefit from an inside draw.  Expect Irad Ortiz Jr. to try and hold position to save ground throughout.

SOUPER TAPIT is the ‘now’ horse.  He decimated a field of five by 9-lengths in an off-the-turf race on December 16 and is a Grade 3 winner way back in 2017 at Woodbine.  Dirt appears to be his preferred surface and he should be able to sit back and relax under John Velazquez as DALMORE and JAY’S WAY duke it out in front of him.

For another take on the Sunshine Millions Classic, complete with analysis and wagering strategies, check out Jeremy Plonk’s Xpressbet Race of the Week article.