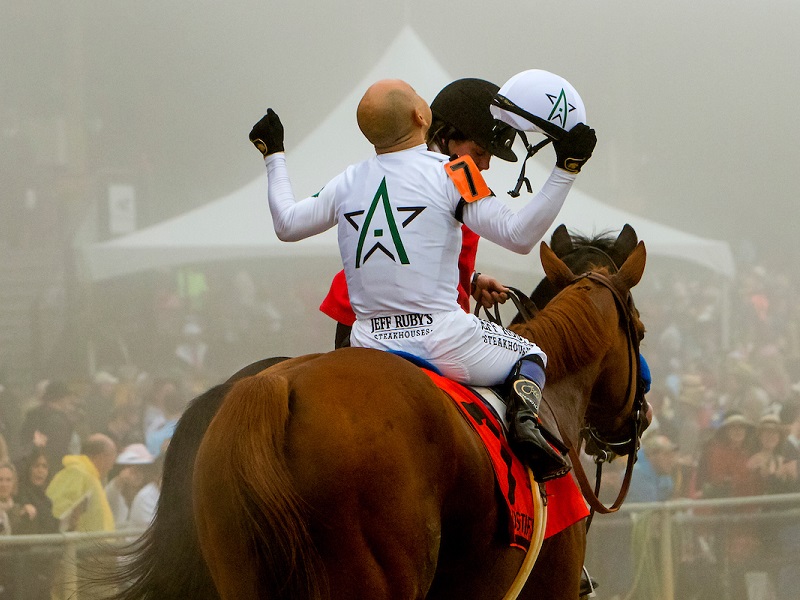 The 2018 Eclipse Award finalists were revealed earlier this month. The winners in each category will be announced at Gulfstream Park on Thursday at the 48th annual Eclipse Awards dinner presented by The Stronach Group, Daily Racing Form and Breeders’ Cup.

And now here are my predictions for the 2018 Eclipse Awards:

This category, folks, is a slam-dunk. The award no doubt will go to undefeated Game Winner, winner of three Grade I races, including the Breeders’ Cup Juvenile.

This category is not a slam-dunk. I could see the award going to either Jaywalk or Newspaperofrecord.

Jaywalk won four of five starts. She took the Grade I Frizette by 5 3/4 lengths and Grade I BC Juvenile Fillies by 5 1/4 lengths.

Newspaperofrecord, who did all of her racing on turf, won all three starts by margins of 6 3/4, 6 1/2 and 6 3/4 lengths. She was victorious in a pair of stakes races, the Grade II Miss Grillo and Grade I BC Juvenile Fillies Turf.

This, for me, is one of the tougher calls this year. I am going with Jaywalk to get the Eclipse Award in this category. But I won’t be shocked if I am wrong.

The award in this category undoubtedly will go to undefeated Triple Crown winner Justify. He is a finalist for Horse of the Year, along with Accelerate and Monomoy Girl.

Considering Monomoy Girl is a finalist for Horse of the Year, I make her a 1-20 favorite to get the Eclipse Award as champion 3-year-old filly. She was a five-time Grade I winner (Ashland, Kentucky Oaks, Acorn, Coaching Club American Oaks and BC Distaff).

Inasmuch as Accelerate is a finalist for Horse of the Year, I believe it is a certainty he will get the award as champion older dirt male.

Unique Bella was retired after a victory in late July. But I think she probably will get the Eclipse Award in this category off her two Grade I victories (Santa Maria and Clement L. Hirsch) in conjunction with her overall consistency (four starts, three wins and a second).

“You can take it to the bank that Roy H will get this one,” I wrote a year ago regarding the 2017 male sprint category.

And Roy H, who won the Grade I BC Sprint in 2017, did indeed get the 2017 Eclipse Award as champion male sprinter.

I say once again that you can take it to the bank that Roy H will get the 2018 Eclipse Award as champion male sprinter. He won a pair of Grade I races in 2018 (Santa Anita Sprint Championship and BC Sprint).

Shamrock Rose put together a four-race winning streak that was highlighted by victories in the Grade II Raven Run and Grade I BC Filly & Mare Sprint. I think that will be sufficient for her to get the Eclipse Award in this category.

This, to me, is the toughest of all categories to try and predict the winner. Even though there are only three finalists to choose from, I feel like it will be a miracle if I get it correct.

Any one of the three finalists might get it. All three have pluses and minuses.

Expert Eye’s plus is he won the Grade I BC Mile. His minus is that was his lone start in North America.

Glorious Empire’s pluses are he won a Grade I race (Sword Dancer) and two Grade II races (Bowling Green and Fort Lauderdale). His minuses are that one of his Grade II wins was a dead heat and, in his most important start of the year, he was eased in the Grade I BC Turf.

Stormy Liberal’s plus is he put together a four-race winning streak, including a pair of graded stakes races, the Grade III Eddie D. and Grade I BC Turf Sprint. His minus is he raced exclusively in grass sprints. As Bob Ehalt explained in an article he wrote for Thoroughbred Racing Commentary, “the turf sprint division lacks an abundance of robust stakes.”

I voted for Expert Eye. Ehalt voted for Glorious Empire. And I can tell from what I have read and heard there were plenty of votes for Stormy Liberal.

With zero confidence, I’ll predict the Eclipse Award will go to Glorious Empire.

This award definitely will go to either Enable or Sistercharlie.

Enable followed a second Prix de l’Arc de Triomphe trumph by becoming the first horse to ever win the Group I Arc and Grade I BC Turf in the same year. But as in the case of Expert Eye in the male turf category, some will hold it against Enable that she made just one North American start.

I think Sistercharlie’s body of work in North America will trump Enable’s one, albeit impressive, North American victory.

This definitely comes down to either Accelerate or Justify.

I think it’s fair to say that most people thought the 2018 Horse of the Year title was decided on June 9, the day that Justify became the sport’s 13th Triple Crown winner. However, to Accelerate’s credit, he put together a campaign that no doubt is going to draw some Horse of the Year support.

But as I wrote a number of times during the year here at Xpressbet.com, history tells us that, no matter what Accelerate did, it was going to be an uphill battle for him to topple a Triple Crown winner for Horse of the Year.

As for Justify, not only did he sweep the Triple Crown, he achieved a plethora of firsts.

--No other horse in the 144-year history of the Kentucky Derby won it after running the first quarter-mile as fast as Justify did (:22.24).

--Justify defeated 19 opponents in the Kentucky Derby, seven in the Preakness and nine in the Belmont, a total of 35 in the three classics, more than any other Triple Crown winner.

Accelerate did put together a 2018 campaign worthy of a Horse of the Year. He joined Lava Man (2006) and Game On Dude (2013) as the only three horses to win Southern California’s three major events for older horses in the same year-- the Grade I Santa Anita Handicap, Grade I Gold Cup at Santa Anita and Grade I Pacific Classic. All three races of those races were contested at 1 1/4 miles. Accelerate won the Pacific Classic by a record 12 1/2 lengths.

It seems some are going to hold it against Justify that he did not race after June. That’s fair. After all, it’s called Horse of the Year not Horse of the Half-Year.

As I said, I think Accelerate is going to get some Horse of the Year support. But I also think it will be Justify whose name is announced Thursday as having been voted the 2018 Horse of the Year.