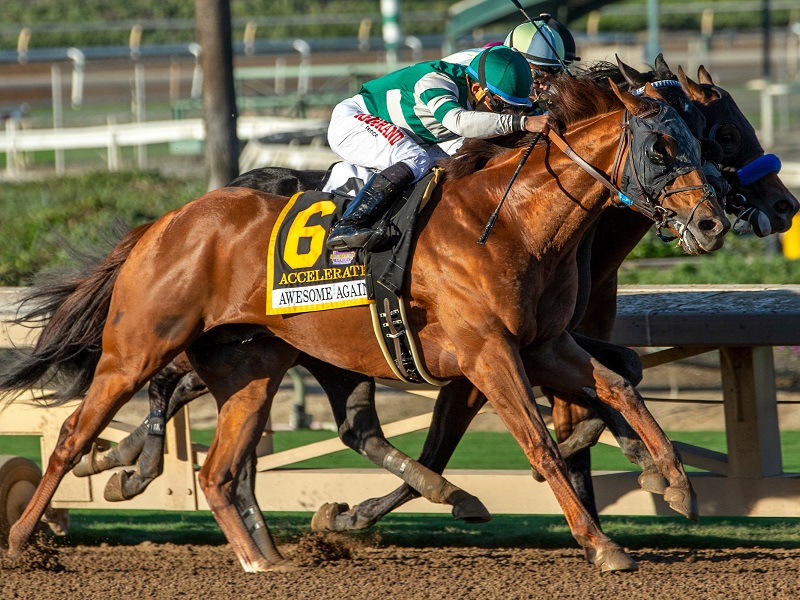 Late Saturday night, after 10 horses have competed in the inaugural running of the $7 million Pegasus World Cup Turf Invitational and 12 others have met in the third edition of the $9 million Pegasus World Cup Invitational, and following an evening with rapper Snoop Dogg and DJ Mark Ronson in the Pegasus LIV Stretch Village, TSG chairman and president Belinda Stronach will pick up a very large tab.

As any ‘playa’ knows, South Florida ‘game’ ain’t cheap. South Beach, home to some of the world’s most popular hot spots, is a mere stone’s throw from Gulfstream Park so, ‘keeping up with the Joneses’ is a challenge.  However, this expenditure is far from wasted. It’s an investment in Gulfstream Park, the Pegasus brand and horseracing in general. So far, the concept appears to be working with appeal aimed at a varied demographic. This is the third Pegasus renewal and it’s definitely the most anticipated. Previous versions have attracted the world’s top dirt horses in Arrogate and Gun Runner. That’s the case again this year as Accelerate, the top-rated active dirt runner, fills his position in the starting gate. But Pegasus buzz is greater this time around—regarding the races and the after party.

This year, the addition of a $7 million Pegasus turf race in an interesting twist. As with any maiden voyage there will be a learning curve. In this case, that’s horsemen becoming familiar with the race and its position on the calendar so that they can aim charges at it in the future. It wasn’t long ago that despite its massive purse the dirt version required a similar introduction period. Familiarity is particularly important when considering European-based runners—usually shut down from November until spring. This year there is one representative from across the pond in the Aiden O’Brien-trained filly Magic Wand. She has a legitimate chance to win, but in a year or two this race will become a target instead of an afterthought for Euros and horsemen worldwide. Aerolithe, another female invader this year, comes from Japan, an extremely positive sign.

While now firmly established the original dirt version of the Pegasus World Cup Invitational could use a good old-fashioned upset. You know, the kind where the heavy favorite runs well, but is nipped in the final strides by a speedy, worthy foe carrying less weight. There’s a tiny hint that that could happen this year because, from stall to stall, this is by far the deepest Pegasus field. Some would argue that Accelerate isn’t as dominating a presence as either Arrogate or Gun Runner so he hasn’t scared the competition away. That could be partially true. But Accelerate’s formidable enough and the structure of Pegasus entry fees and purse distribution demands competitors finish ‘in the money’ or lose connections chunks of cash.  And that’s how it should be. Like in the old days when ‘My horse is faster than yours’ was the battle cry and purses were completely generated by owners.

Horseplayers will enjoy an outstanding card jam-packed with stakes races. The afternoon’s final pick 4 features a guaranteed $1 million pool and the popular Rainbow Six wager could have a $500,000-plus pot. Xpressbet account holders can enjoy a variety of promotional wagering opportunities. Players can get cash back (up to $25) if backed runners finish either second or third in the Pegasus dirt or turf. Plus, players can collect a share of a 5 million point split! A $25 minimum win wager on the winner of the Pegasus turf and Pegasus dirt makes players eligible for a 1 million split each. Hitting either early or late pick 4 wagers earns a share of 1 million points each. Winning exacta wagers on four different races on the card also will earn a share of 1 million points. Please visit Promotions for complete information on all offers.

#1 Coal Front is the one to beat. He’s favored and seems like a solid single. Let’s start there.  For a complete rundown on this race and all the Gulfstream action please check out Xpressbet’s Free Pegasus Wager Guide available on the website.

Have to admit this race seems completely wide open. We’re going to suggest hitting the ‘All’ button for this race in hopes that a nuclear bomb lands in the winner’s circle. If favorites Coal Front and Accelerate win (and they should), players are going to need something to ‘juice’ the ticket. That help might come in this race.

European invader #1 Magic Wand gets the top nod in here based on her second placings in the Prix de l’Opera Longines and Quatar Prix Vermille both at Longchamp. Most recently she was fourth, less than three lengths behind Sistercharlie in the BC Filly & Mare Turf.

#2 Yoshida can’t be ignored. Following success on the dirt—a Woodward win and a close fourth in the Breeders’ Cup Classic—he returns to the grass where he’s won 4 of 10 starts.

#5 Next Shares has earned respect by winning 3 of his last 4, including the Grade 1 Shadwell Turf Mile. He’s got a recent score Jan. 5 in the San Gabriel at Santa Anita.

#7 Bricks and Mortar has to be respected. He hails from Chad Brown stable and is 2 for 2 at Gulfstream Park. He’s also 5 for 7 on turf and fresh off a sharp allowance win at Gulfstream.

#8 Delta Prince is a relatively lightly-raced 6-year-old with 4 wins in 11 starts. He’s had success over the Gulfstream turf with 2 wins in 3 starts. Forget his last race which was on dirt with blinkers that will be removed for this. He recently worked six furlongs at Palm Meadows in 1:10!

#9 Catapult is a real trier that hasn’t been off the board since June 2017 at Belmont Park. Distance could be a question mark with this one, but he has won at a mile and one-eighth. Trainer John Sadler could have a monster earnings day if Catapult and Accelerate are successful.

#5 Accelerate is the fastest horse in this race. He’s got enough speed to be close to the early pace and substantial determination in the lane. There’s a reason (actually several reasons) why this horse is in the running for Horse of the Year honors. He’s clearly the one to beat.

#3 City of Light is drawn inside Accelerate and likely will go for the early lead. He could have some company up front, but if the heat isn’t too intense, he could be difficult for the favorite to run down in the lane. While we believe that Accelerate will get the job done, City of Light seems to have the best chance of pulling off the upset.