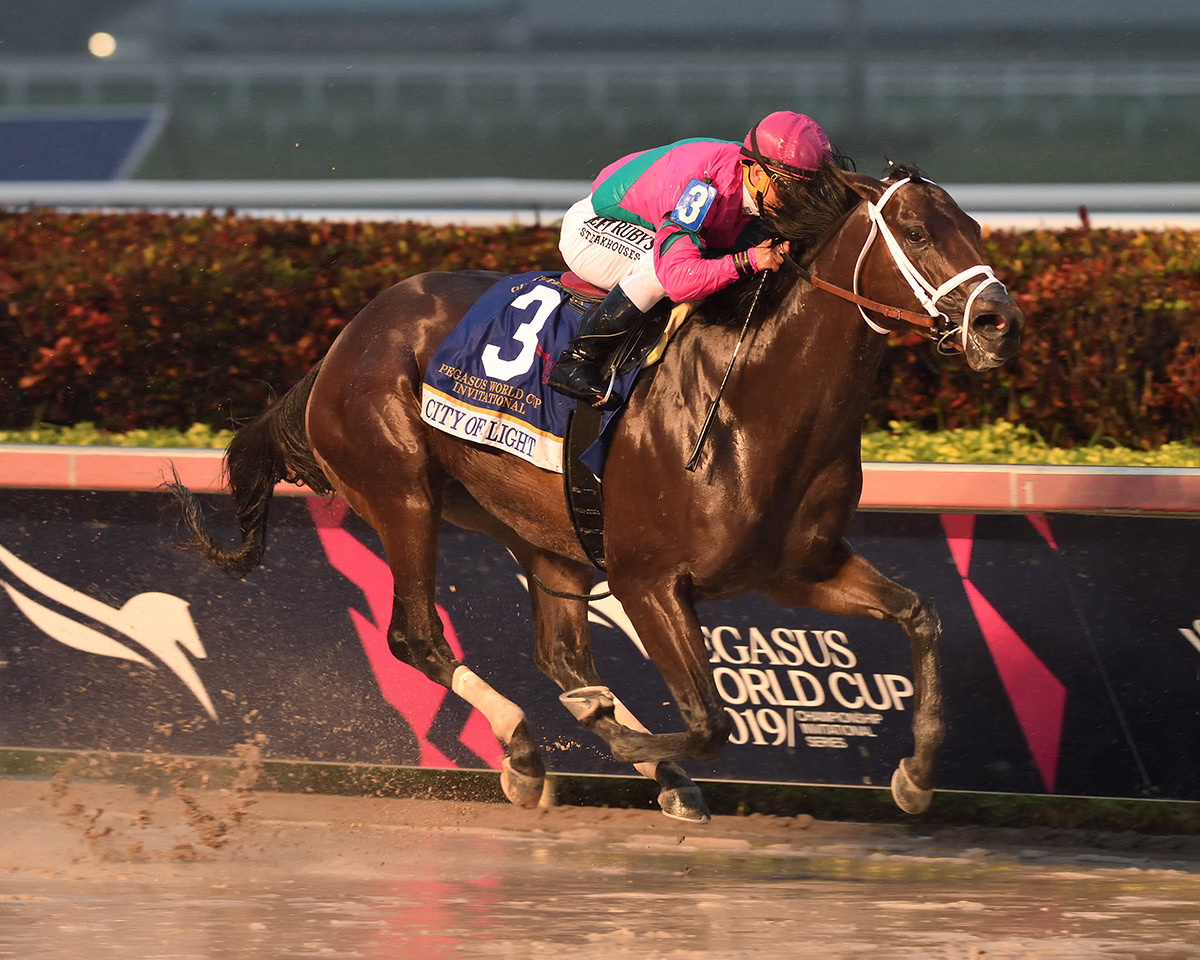 City of Light’s dominating Pegasus World Cup Invitational score Saturday puts him alongside previous race winners in what ultimately could become an equine pantheon. As the third winner of the fledgling event ‘Light joins previous Pegasus champs Arrogate and Gun Runner, both considered the best active dirt horses in the world when they won the race. Pre-2019 Pegasus, Accelerate wore that crown. By then end of the afternoon, however, when everyone was soaked to the socks, the coronet was transferred to sit between City of Light’s ears.

City of Light’s appellation now is cemented in history alongside Arrogate’s and Gun Runner’s as Pegasus champs. But where does the son of Quality Road’s name rank on a list of all-time great horses? Is he ‘one-of-the-ones’ or merely ‘one that got good’ at the most opportune time? The appropriate answer has to be that we didn’t see enough of City at Light’s best to rank him among the all-time greats. However, there remains a sneaky suspicion that the 5-year-old retired just when he was about to wreak havoc on the Grade 1 stakes calendar.

By parlaying BC Mile-to-Pegasus wins City of Light vaulted to the head of the handicap class. His combination of speed and tractability made him a very difficult out. Shortly after the race, Like Arrogate and Gun Runner, Accelerate and City of Light car-pooled north to Lexington to assume careers as popular suitors. Because ‘Light proved his mettle from seven furlongs in Arcadia, CA to a mile and one-eighth in Hallandale Beach, FL, he should be popular at stud.

Simultaneously bidding ‘farewell’ to the sport’s top two older horses (plus the hurried 2018 departure of Jusify) can’t be good for racing business or for the sport’s fan base. But, at this point, shouldn’t racing enthusiasts be accustomed to premature ‘farewells?’ Stars have been hastily exiting stage-left for decades and we’ve always have found immediate if not equal substitutes. Top horses will emerge in 2019. We just don’t know who they are yet.

While City of Light and connections posed for pictures, the real winner Saturday was the Pegasus event. In addition to developing into the sport’s newest, richest, crowning achievement, Pegasus has become the swan song of choice for the best in US-based dirt horses.

Buoyed by a new turf event to compliment the dirt version, the entire stakes-laden Gulfstream Park card originally promised to deliver an outstanding watching and wagering Saturday diversion. Unfortunately, Mother Nature elected to crash the party. Heavy rain forced a few early races off turf and compromised both main and grass surfaces. Early speed proved indispensable as gaining significant ground in the stretch on the sloppy/sealed main track proved improbable. The soggy footing clearly aided some and discouraged others. Despite the conditions (or perhaps because of them) the afternoon produced incredibly formful results featuring depressed multi-leg payoffs shared by the masses. It’s difficult to assess if fast and firm footing would have provided an upset or two along the way, but it’s clear proceedings would have been infinitely more interesting. What can one do, though? Racing is an outdoor sport at the mercy of the elements—even in south Florida.

A major undercard highlight was the absolutely smashing debut of Hidden Scroll, a 3-year-old son of Hard Spun trained by Hall-of-Fame conditioner Bill Mott. ‘Scroll took the early lead, set a solid pace and drew clear in the lane by double-digits. The performance caused visions of Kentucky Derby sugarplums to dance in some heads. However, even though Justify last year cracked the over 100-year-old Apollo curse that demands a 3-year-old Derby contender first perform at age 2, it’s still a consideration. As powerful as Hidden Scroll looked there are reasons to temper his Derby-winning chances. The ‘off’ track may have helped him and hindered others, contributing to the large winning margin. Also, ‘Scroll missed some time in 2018 due to injury and a view of the race head-on shows that he paddles his left front leg a bit. Certainly, none of this excludes ‘Scroll from winning the Kentucky Derby, but we’ve seen similar first-out electrifying performances fail to translate into long-term success.

The maiden voyage lineup in the Pegasus World Cup Turf won’t be ranked among the world’s best collections of turf performers, but it’s a fine start and results point to a bright future for the race. Here’s why: Chad Brown, a trainer with unquestionably the deepest turf roster in the nation, conditioned winner Bricks and Mortar. The 5-year-old approached the race perfectly, having had a December 22 Gulfstream prep after a 14-month layoff. The December winning effort was the fastest of his career and he hadn’t lost in 2 previous outings over the Gulfstream turf. A fit-and-ready horse-for-the-course conditioned by the nation’s best--that’s a dangerous recipe. Brown, who’s won the Eclipse Award as the nation’s top trainer in the last 3 consecutive years, will want to win this race again…and again.

Magic Wand, a 4-year-old filly from Aiden O’Brien’s powerful European-based stable, finished second. Connections took advantage of a massive break in weights for her to carry 112 pounds to 124 for male counterparts. Five pounds of that advantage was a sex allowance and there was a 7-pound non-Lasix deduction. Previously, Magic Wand had finished second in 2 of 3 starts in France in the Prix de l’Opera Longines and Qatar Prix Vermille—both Group 1s against fillies. Last out she was fourth, beaten less than 3 lengths, in the BC Filly & Mare Turf behind Sistercharlie another Chad Brown-trained charge. While Pegasus Turf doesn’t neatly fit into the European racing schedule, a $7 million purse and near success in 2019 demands that future accommodations be made for the race.

Aerolithe, a 5-year-old mare from Japan, also enjoyed a light impost of 112 but didn’t fire. However, what really matters to the Pegasus brand is that she was there. Race organizers actively will pursue future entries from Japan in a specific attempt to qualify the race for inclusion on the coveted Japanese wagering menu.

The inaugural edition of the Pegasus World Cup Turf Invitational was announced in September and that late pronouncement caught owners and trainers by surprise. Campaigns previously had been established and the race was part of no one’s annual plan. With the event now firmly positioned on the calendar there will be sufficient time for trainers like Chad Brown, Aiden O’Brien et al to point their very best competitors toward future renewals. Therefore, expect the quality of Pegasus Turf participants to escalate accordingly and to attract overflowing fields in the future.

It’s taken 3 years, various tweaks and tens of millions of dollars for Frank Stronach’s Pegasus World Cup concept to gain solid footing on the American racing calendar. The event took another forward step in 2019 while overcoming some nasty weather. This horseplayer is grateful to The Stronach Group for its commitment to racing and entertainment. Full disclosure notes that TSG signs my paychecks. Still, the sport can use all the big days it can muster and there aren’t many being created from scratch like Pegasus. Besides, when it comes to innovation and massive investment in the sport the question remains: If not TSG then who?