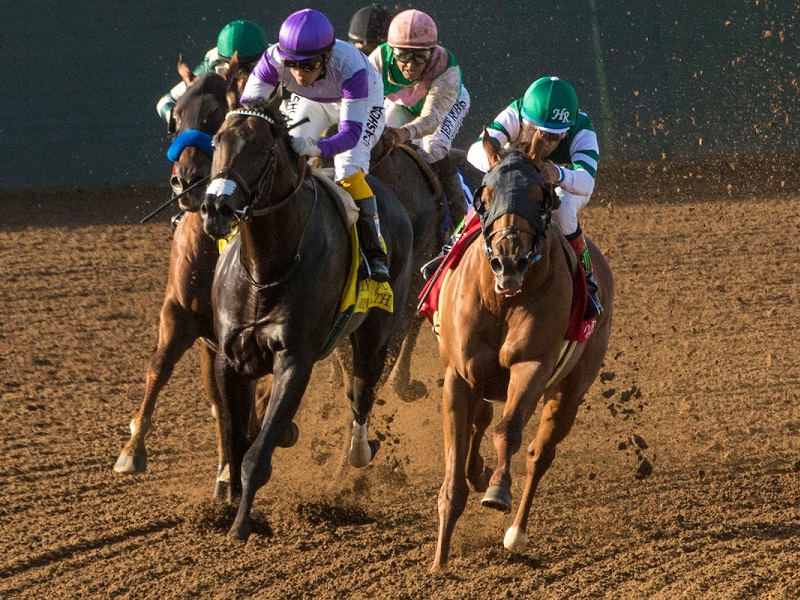 Racing saw a pair of 1-to-9 shots showcased in the past couple of days, and only one of them delivered. After seeing Arrogate finish fourth in Saturday’s San Diego Handicap, thank goodness that shark beat Michael Phelps on Sunday night. Order seems temporarily restored.

Both caused various levels of social media chatter, but Arrogate’s stunning loss in his first start since March’s Dubai World Cup caught horse racing observers completely off guard. Before the race, local newspaper headlines called the race “A Walk in the Park” and 60 Minutes was on hand to do a story on the crowning of the greatest horse since Secretariat.

Heck, so did Donworth.

And even Cat Burglar.

Arrogate beat only a horse whose jockey lost the irons while coming home fourth of five. It marked one of the most puzzling performances in modern racing history.

When Cigar lost his 16-race win streak at the hooves of Dare At Go at Del Mar in 1996, he still ran a solid second while beating G1 winner Siphon by 7 lengths for the minor awards. Zenyatta suffered her only defeat after 19 wins to an accomplished Blame in the 2010 Breeders’ Cup Classic, and was cutting into the margin at that. Rachel Alexandra seemingly lost the will to be exceptional at 4, and still ran second in all three of her defeats that season before retirement. And Big Brown’s shocking retreat at the top of the 2008 Belmont Stakes stretch followed a public bout with bad feet that everyone knew about going into the Triple Crown finale.

Also consider a week ago when some questioned the state of affairs with star filly Songbird. All she did was win the G1 Delaware Handicap over 1 ¼ miles and some were ready to pen her career epitaph because the win margin and style of victory weren’t sufficient of greatness. Fast forward to this week: Anyone want to trade explanations and outcomes straight up, Arrogate for Songbird?

Yes, we were reminded that horses aren’t machines once again – a factor often forgotten. Nick Zito has said a million times that this game will humble you like no other. But we already knew that, didn’t we? We just chose to suspend reality because, well, we know everything these days. The so-called Information Age has been replaced by the Opinion Age, as I’ve written about in the past few years.

The only thing invincible about Arrogate or Songbird or Cigar are the opinions we attach to them. Our overzealousness for greatness is only surpassed by our incessant want to be right. We learned that lesson perhaps as much as any by following the social media reaction in the past two weekends.

Songbird had her detractors before the Delaware Handicap as part of a healthy debate of just how good she was and whom she had beaten. Perhaps that hesitation to anoint her was due to the recent regality in the distaff division headed by Zenyatta, Rachel Alexandra, Royal Delta and Beholder. That’s a lot of “all-time” greats to swallow in one division just in the current decade only seven years deep. Plus, Songbird lost to Beholder – albeit a nose – and it’s hard to build an unflappable following knocking off Carina Mia, Paid Up Subscriber and Go Maggie Go. I think she’s a filly for the ages; you’re welcome to disagree.

But when Songbird almost lost – yes, almost – it became a firestorm for her critics, who already had an opinionated ax to grind. Today’s Opinion Age starts with a premise and waits for something to happen that would back that take. It’s the same no matter if you’re talking horses, politics or celebrity gossip…from DRF to CNN to TMZ.

Arrogate, however, had no such pre-San Diego detractors. That’s why the social media reaction to his loss was bafflement and sympathy. All were either stunned or hoping upon hope that he was not injured, convinced that their opinion of the horse or his infallibility could not possibly have been wrong. There were no pot shots taken at Arrogate for losing as there were for Songbird, who had, in fact, won.

It’s not a pretty look when our reaction to reality is solely based on our opinions. It’s further self-enhancing in a world dominated by our constant need to compete with each other for online superiority and promotion from within.

Horseplayers should understand this more than anyone else. We have been doing it for centuries at the betting windows. My opinion is superior to yours and we score that by how much we get back on successful backings. But apparently cashing a ticket is not good enough anymore. You must go on social media and flaunt your superior knowledge – or at a minimum dress up your bull-headed opinions as facts.

The opposite ways in which the public reacted to Songbird and Arrogate went a long way in highlighting just how much our pre-race feelings impact our post-race analysis. We are waiting for something to happen to enhance what we’ve already declared imaginarily as fact.

Truth is, some people are just lurking, waiting to smell the blood in the water, which is an ironic and fitting conclusion to Shark Week.