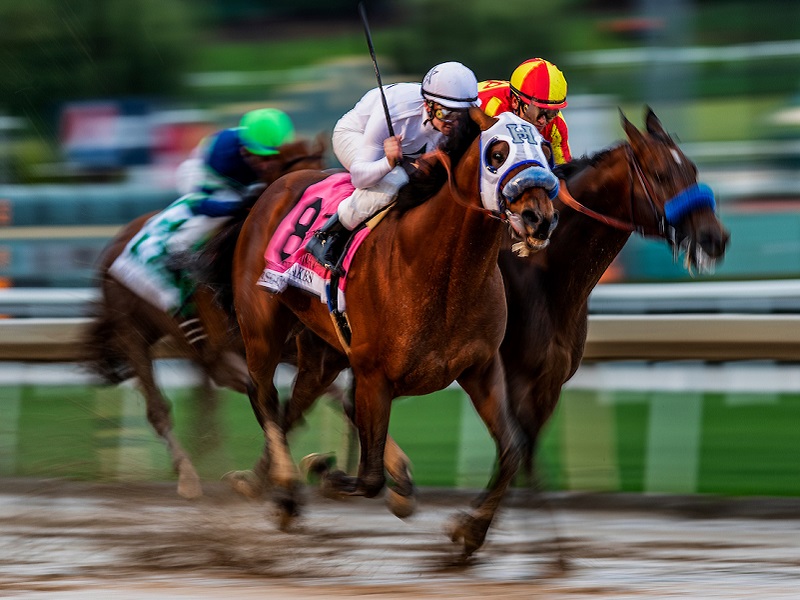 With a trio of 3-year-old stakes races on tap Saturday it would have been reasonable to expect one of those to emerge as the afternoon’s highlight. ‘Reasonable,’ but incorrect. While the Grade 2 Fasig-Tipton Holy Bull at Gulfstream, the Grade 3 Bob Lewis at Santa Anita, and the Grade 3 Withers at Aqueduct, in different ways each provided interesting results, the Grade 2 San Pasqual at Santa Anita for older horses stole the show.

Battle of Midway, a 5-year-old horse--5 races removed from a truncated stud career in which he consistently missed the bullseye--latched onto favored McKinzie’s hip from the outset--while three-wide over a soggy, sloppy surface. He never let go. McKenzie, for his part, stalked pacesetter Giant Expectations, and took over when the real running started. Immediately, Battle of Midway and jockey Flavian Pratt moved to hook McKinzie and Hall of Fame partner Mike Smith. For the length of the stretch those two traded body blows; neither surrendering an inch. Finally, in the concluding yards, ‘Midway moved away from his foe.

Besides providing proof that these two warriors immediately could help to fill a void atop the older division created by week-old retirements of City of Light and Accelerate, the San Pasqual also enhanced the emergence of 26-year-old jockey Flavian Prat. No secret to any SoCal racing observer, Prat already has proven his worth as a top rider. However, he hasn’t quite established himself as an international big-game hunter alongside youthful, Eclipse-winning, flying Oritz brothers. Out-gunning ‘Big Money’ Mike Smith and a Bob Baffert-trained odds-on favorite in a graded stakes will launch Prat into the pilot stratosphere quickly.

Prat directed Battle of Midway to sit directly off McKinzie’s flank—taking the fight to ‘the horse to beat.’ Confidence in the ability and fitness of one’s mount is required for a rider to engage an odds-on Baffert runner from the break. It also demands a rider’s conviction in his own capability to get the job done when chips are down. Smith, as fine a jockey as we’ve ever seen, waited patiently before striking McKinzie with the whip near the finish. One assumes the rider felt his mount was giving all, so why hit him? Also, when Smith finally did stroke McKinzie with that famous left-handed reminder the horse responded by wringing his tail, as he has since he was 2. Perhaps, McKinzie detests being hit? Imagine that.

As for the sophomores--the golden boys of horse racing and the ones general sports fans meet each May--Mucho Gusto easily won the Robert Lewis at Santa Anita over the same sloppy track as the San Pasqual. His partner Joe Talamo, who seems to recently have gained a toehold in the powerful Bob Baffert stable, was able to relax the son of Mucho Macho Man early and in the lane and they powered home with generous, freewheeling strides, ears pricked at the finish. The colt probably relished the sloppy track, but he’s now won 3 of 4 races with improved Beyer Speed figures in each outing. As for Mucho Gusto’s long-term divisional outlook? Forget where Mucho Gusto ranks on Baffert’s overflowing soph roster. Apparently, according to Baffert in a post-race interview Mucho Gusto represents the ‘B-team’ for owner Michael Lund Peterson. Tale of the Union, who broke maiden at Del Mar, is presumably Lund’s ‘first stringer.’

Those that wagered correctly on the Withers at Aqueduct got an early ‘Tax return’ in the form of a $6.20 mutuel payoff. Tax, a son of Arch out of Toll, stumbled at the start, but quickly recovered to be near the early lead. From the rail post Tax and jockey Junior Alvarado rode pine the entire race behind two speed horses into the stretch. That’s where things got a bit tight. Jockey and gelding showed admirable courage by slipping through a narrow opening between the rail and eventual runner-up Not That Brady. Since the margin of victory was small, the inside maneuver probably made the difference between victory and defeat. Claimed at Keeneland for $50,000 out of his second start by trainer Danny Gargan, Tax was third behind Maximus Mischief in the Grade 2 Remsen. While Tax employs a desirable stalking style and now has won at a mile and one-eighth, he seemed desperate to get to the wire. His jockey reported that once on the lead his mount began gawking, but the diminishing margin seemed more than that to this observer. At this stage, a mile and one-quarter appears a stretch for him.

Gulfstream Park’s Fasig-Tipton Holy Bull was supposed to be a coronation of sorts for unbeaten Maximus Mischief. In three starts he’s never behind anyone at any point of call except once second by a half-length at the start. His three wins were by 8 ¾ , 6, and 2 ¼ lengths and the son of Into Mischief was odds-on to take a giant step forward Saturday. Before the race, regular jockey and Parx standout Frankie Pennington was replaced in the saddle by Eclipse Award winner Jose Ortiz. Presumably, the switch was made in anticipation of Maximus Mischief competing in major stakes races further along the Triple Crown trail. Unfortunately, nothing Maximum Mischief did Saturday bodes well for his future. He acted unruly before the race, left the gate with disinterest, and never picked up his hooves. We’re all entitled to have a bad day, but one has to wonder if the colt’s slow-paced Remsen wire-job was fool’s gold after all.

Taking full advantage of the favorite’s no-show was Harvey Wallbanger, a Congrats colt purchased by trainer Ken McPeek for $50,000 at the Fasig-Tipton Keeneland July sale. He closed along the inside from last at mouth-watering odds of 30-1 to upset the apple cart. Obviously, that price was too large on a runner who’d never been worse than second in four previous starts—three times as the favorite! A bullet :47 3/5 breeze—best of 32—at Gulfstream also could have been a clue to the colt’s readiness. What probably influenced horseplayers to wager elsewhere was Harvey Wallbanger’s pedestrian speed figs. However, as we’re reminded each year at this time, 3-year-olds can and do improve dramatically. Conversely, sometimes they don’t improve and are surpassed by developing foes.

Tossing shade on the race was the runner-up appearance of 129-1 runner-up Everfast. Usually, when a huge longshot finishes second in a graded stakes race there’s reason to doubt the race’s overall quality. When odds-on Maximum Mischief and second choice Mihos misfired, the race became a wide-open affair.

This is an exciting time of the year. From now until the first Saturday in May horseplayers will earnestly mine for Kentucky Derby gems. Just about each Saturday from now on will feature sophomore races with critical Louisville implications. However, on this first Saturday in February, when there were 3 such tests, old guys ruled and promised that this season’s older division will recover from recent retirements just fine.