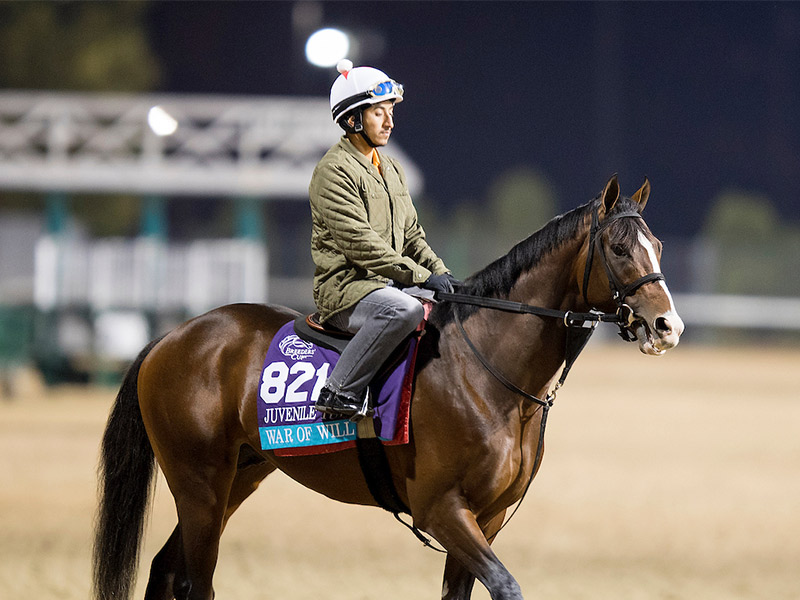 War of Will, coming off a sparkling four-length victory in the Grade III Lecomte Stakes, heads a field of 15, including one horse on the also-eligible list, entered in this Saturday’s Grade II Risen Star Stakes at Fair Grounds Race Course & Slots.

Trained by Mark Casse, War of Will drew the disadvantageous 14 post.

“Obviously the post is outside,” Casse said. “But we’d rather be outside than inside. He’s got enough speed so he’ll get over. And if he’s as good as we think he is, it shouldn’t matter.”

When Casse said “it shouldn’t matter,” it brought to mind what happened when Hall of Fame trainer John Nerud sent Dr. Fager from New York to California for Hollywood Park’s 1968 Californian Stakes.

The conditions for the Californian that year were so complicated that even an MIT graduate would have had difficulty determining how much weight a horse was supposed to carry. At the time, Bob Benoit was Hollywood Park’s director of publicity.

“When Dr. Fager was entered in the Californian,” Benoit told me years later, “he was entered with the wrong weight.”

According to Bob Hebert’s recap of the Californian in the BloodHorse magazine, Nerud had entered Dr. Fager with 124 pounds.

“When the racing office re-checked the weights,” Benoit said, “they found a mistake had been made. Dr. Fager was going to have to carry 130.”

Benoit said he was given the unenviable task of having to phone Nerud to tell him that Dr. Fager would be carrying 130 instead of 124. Years later, Benoit told me the phone conversation with Nerud went like this:

Benoit: “I have some bad news regarding Dr. Fager.”

Nerud: “What? Did something happen to the horse on the plane?”

Nerud: “Then what’s the bad news?”

Benoit: “Well, there was a mistake made regarding the weight Dr. Fager has to carry.”

Nerud: “Is that right? How much does he have to carry?”

After a few seconds of silence, Nerud said: “It won’t matter.” Click.

Nerud was right. It didn’t matter. Despite being burdened with 130 pounds, Dr. Fager won the Californian with authority by three lengths as one of his victories during one of the greatest single seasons by a Thoroughbred in American racing history.

In 1968, Dr. Fager was voted champion sprinter, champion handicap horse, co-champion grass horse and Horse of the Year. He is the only horse to win four titles in a single year.

“Dr. Fager set and tied records from seven furlongs to 1 1/4 miles, slashing the mile mark to 1:32 1/5 en route,” Charles Hatton wrote of Dr. Fager’s 1968 campaign in the American Racing Manual. “He did everything with flair, though he was not tested at cup routes and his stamina was not incorruptible by the iconoclasts. His prodigal wire to wire speed, his impartiality concerning track conditions, his bravery under fire and his ability to make light of enervating weights, elicited widespread acclaim.”

Getting back to the 1 1/16-mile Risen Star, there was some good news for War of Will last Sunday. Hall of Fame trainer Bob Baffert tweeted that Kingly, who had drawn post 13, would not be shipped from California to Louisiana for the Risen Star.

Kingly, a Kentucky-bred Tapit colt, now is to compete in this Saturday’s Grade III El Camino Real Derby. Thirteen have been entered in this 1 1/8-mile race, which will be contested on Golden Gate’s synthetic surface.

In Kingly’s two lifetime starts, he won a maiden special weight race at Del Mar on Dec. 1 before finishing second in an allowance/optional claiming affair on a sloppy track Jan. 31 at Santa Anita. He is a half-brother to New Year’s Day, who won the Grade I Breeders’ Cup Juvenile in 2013 for Baffert. Kingly also is a full brother to multiple Grade II winner Moyahmen.

With Kingly out of the Risen Star, the worst it will be for War of Will is post 13. And if there are any additional defections, War of Will will get to move even further inside.

After the BC Juvenile Turf, the decision was made to find out what War of Will could do in a race on the dirt. In his final start at 2, the Kentucky-bred War Front colt splashed his way to a five-length win in a 1 1/16-mile maiden special weight race on a sloppy track Nov. 24 at Churchill. He posted a final time of 1:45.45. On that same track that same day, Signalman won the Grade II Kentucky Jockey Club Stakes at the same distance in 1:45.29.

In War of Will’s first start at 3, he won the Lecomte by completing one mile and seventy yards in 1:43.44, proving he could excel on a fast track. Earlier on that card, Needs Supervision won the Silverbulletday Stakes for 3-year-old fillies at the same distance in 1:45.43.

Casse has gone so far as to say he believes War of Will “is an absolute superstar.” After the Lecomte, Casse recalled that he had told some friends about a month ago that he felt he had “a big chance” to win the Kentucky Derby this year with War of Will. The veteran trainer added that he doesn’t usually “say things like that, so that tells you what I think of him.”

War of Will is the Risen Star morning-line favorite at 5-2. The 6-1 second choice is Owendale. Trained by Brad Cox, Owendale won an allowance/optional claiming race by 1 1/2 lengths at the Fair Grounds on Jan. 17 on a wet track rated as good. That Jan. 27 race was run at the same distance as the Lecomte. Owendale, a Kentucky-bred Into Mischief colt, recorded a 91 Beyer Speed Figure in his Jan. 17 triumph. War of Will was credited with a 94 Beyer in the Lecomte.

Country House, listed at 20-1 on the Risen Star morning line, intrigues me as someone who looks capable of making his presence felt. Hall of Famer Bill Mott trains the Kentucky-bred Lookin At Lucky colt.

In Country House’s third career start, he was hammered down to 3-5 favoritism in a 1 1/16-mile maiden special weight race at Gulfstream Park. Well behind early after swerving inward sharply in the initial strides from the inside post, he rallied to win going away by 3 1/2 lengths. While he recorded only a 70 Beyer Speed Figure, it nevertheless was an impressive effort considering the poor start. In fact, the comment in Country House’s past performance line is “slow early, impressive.”

As for War of Will, he ranks No. 5 on my Kentucky Derby list going into this Saturday’s Risen Star. This is my current Top 10:

As expected, the “All Others” option ended up being the favorite in Pool Two of the 2019 Kentucky Derby Future Wager (KDFW) that was conducted last week. “All Others” closed at 5-2.

Also as expected, in terms of individual horses, Game Winner wound up being the favorite, closing at 5-1.

Here were the final odds for Pool Two of the KDFW:

War of Will is one of three individual horses in Pool Two of the KDFW who are entered in this Saturday’s Risen Star. The other two are Limonite and Owendale.

There is bad news for anyone who bet Coliseum, who closed at 22-1 in Pool Two. Coliseum, trained by Baffert, finished third as the 3-5 favorite in last Saturday’s Grade II San Vicente Stakes at Santa Anita. Baffert announced Tuesday that Coliseum now is off the Kentucky Derby trail.

“I’m going to reboot him, kick him out for 30 days,” Baffert told Daily Racing Form’s Brad Free. “We know he’s good, but he doesn’t want to train. He’s sour.”

When Coliseum was unveiled at Santa Anita last Nov. 17, he won a maiden race by 6 3/4 lengths as a 1-2 favorite. But the Kentucky-bred Tapit colt then ran sixth as a 3-5 favorite in Santa Anita’s Grade III Sham Stakes on Jan. 5. In the San Vicente, he finished 6 1/2 lengths behind the victorious Sparky Ville.

Coliseum certainly was hyped prior to his Nov. 17 debut. In John Cherwa’s Los Angeles Times horse racing newsletter last Nov. 11, he listed the Kentucky Derby odds at that time put out by the betting website Bovada. Game Winner was the 8-1 favorite, with Instagrand next at 16-1. Even though Coliseum had not raced yet, he was 20-1. Also at 20-1 were Improbable, Knicks Go and Rowayton.

Knicks Go disappointed in his 2019 debut last Saturday at Tampa Bay Downs. He finished fifth as the 9-5 favorite in the Grade III Sam F. Davis Stakes at 1 1/16 miles. Well Defined led all the way and prevailed by 2 3/4 lengths for trainer Kathleen O’Connell. A Florida-bred With Distinction gelding, Well Defined recorded a career-best 93 Beyer Speed Figure.

It is interesting to compare the odds in Pool One of the KDFW that closed last Nov. 25 with Pool Two. In Pool One, the “All Other 3-Year-Old Males” option was the 6-5 favorite and Game Winner was the 5-2 favorite among the individual horses. Coliseum, who earlier in November had won at first asking, and Instagrand were each 10-1.

Here were the final odds for Pool One of the 2019 KDFW:

WILL RAGS TO RICHES GET ON THE BALLOT?

The National Museum of Racing will announce the 2019 contemporary Hall of Fame finalists via press release Thursday at 11 a.m. Eastern Time. These finalists will be presented to the nationwide voting panel for Hall of Fame consideration.

Will this be the year that Rags to Riches finally is put on the ballot by the Hall of Fame’s nominating committee? I sure hope so.

Will Rags to Riches again be a no-show on the 2019 Hall of Fame ballot? Or will the nominating committee at long last get it right this year?

Winx won the prestigious Group I Cox Plate for an unprecedented fourth time last year. Will her extraordinary winning streak continue in Saturday’s Apollo? If she does get beat, it really can’t be attributed to an Apollo curse. That’s because Winx already has won the Apollo twice, first in 2016 and again in 2017. The renowned mare did not start in the Apollo last year because her regular rider, Hugh Bowman, was suspended at the time.