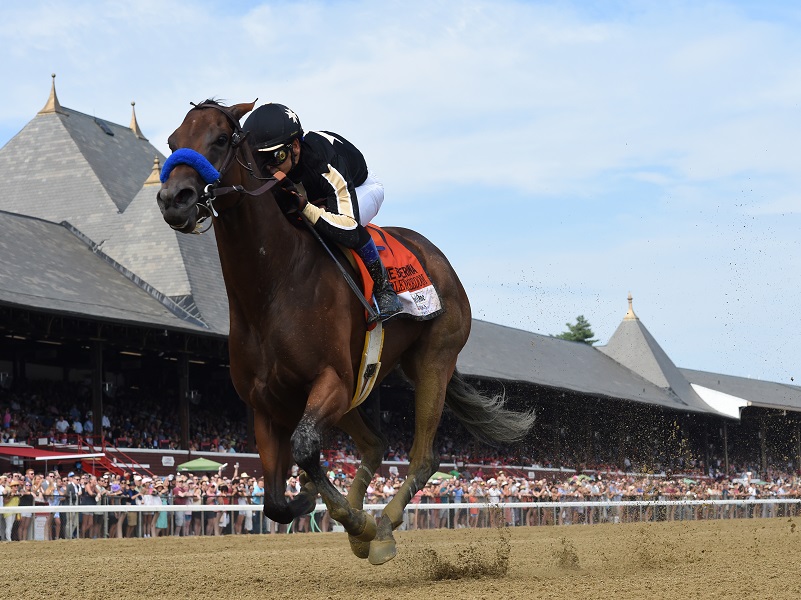 No mandatory payouts this Saturday? No problem! The stakes action is more than enough to make up for it.  Between Gulfstream, Santa Anita, Fair Grounds, Tampa Bay, Golden Gate and Laurel there are nearly 20 top stakes races to choose from.

If you’re in the mood to play a Triple Crown prep race, we recommend Golden Gate’s El Camino Real Derby (a Preakness ‘Win and You’re In’ race) and the Risen Star Stakes from the Fair Grounds (50 Points on the Road to the Kentucky Derby to the winner).  If top sprinters are of interest, check out the Pelican Stakes at Tampa Bay, starring Imperial Hint, or the Santa Monica at Santa Anita, showcasing Marley’s Freedom, Dream Tree and Selcourt.  And if older horses are your style, Jockey Club Gold Cup winner Discreet Lover returns in the John Campbell at Laurel and Lone Sailor, Quip, Flameaway and Harlan Punch square off in the Mineshaft Handicap.

Here's a look at this weekend’s top stakes races, following by some Xpressbet promotions and my picks for six of the top stakes this Saturday.

ON THE PROMO FRONT

Bob Baffert makes a rare trip north to San Francisco with #9 KINGLY, who most recently finished second in an allowance race on January 31. He’s going to be overbet because he’s a Baffert horse so I’m going to bet against.  Of the So Cal shippers, I actually prefer #7 EAGLE SONG. He won two races on the polytrack at Dundalk in Ireland (against fields of 12 and 14) and performed well on the lawn at Santa Anita in two tries. The best of the locals is #4 ANOTHERTWISTAFATE. He’s 2-for-2 at Golden Gate and will try to take this field wire-to-wire.  My ‘Money-Back Guarantee’ bet will be on EAGLE SONG, but my likeliest winner is ANOTHERTWISTAFATE.

The Play: Win bets on EAGLE SONG and ANOTHERTWISTAFATE and Exactas and Trifectas with those two over KING OF SPEED, KINGLY, MAYOR COBB and MORE ICE.

#1 TEQUILITA (8/5) is 5-for-19 in her career, but two of those wins came in three starts at Gulfstream Park.  She loves her surroundings in South Florida and should run big. #7 BLAMED (5/2) can take this field a long way. She didn’t get over the slop well in the G3 Hurricane Bertie on Pegasus Day but that’s alright. The weather in Florida is supposed to clear up before Saturday. If she finds herself alone on the lead, look out. #5 JALA JALA (12/1) would be a great story. She’s a two time winner on Caribbean Classic Day and her connections decided to hang out in South Florida this time around. Hope it works out.

Several inches of snow are expected in Maryland on Saturday, so keep an eye out for scratches and changes.  #2 LATE NIGHT POW WOW is a remarkable 10-for-11 in her career with the only defeat coming in a 4 1/2-furlong dash at Charles Town in April 2018.  The WV-bred daughter of little-known stallion Fiber Sonde is a perfect 2-for-2 at Laurel and, in most years, a race like this would go through her.  But not so fast this time around.  #1 SPICED PERFECTION ships in from Southern California off a win in the G1 La Brea Stakes on Santa Anita Opening Day.  She has won her last three dirt races and brings a ton of class in for this race.  #8 MS LOCUST POINT has the most early speed and they’ll need to catch her.  She won this last year by more than 4-lengths.  I think the streak ends now for LATE NIGHT POW WOW and will bet accordingly.

With #10 CHASING YESTERDAY (5/2) expected to scratch per trainer Bob Baffert, this year’s Rachel Alexandra is anyone’s best guess.  You can make a case for most of them.  #3 SERENGETI EMPRESS (6/1) is probably the quickest of these and she won the G2 Pocahontas by a ridiculous 19-lengths in September.  She didn’t show up in the G1 Breeders’ Cup Juvenile Fillies, though, and note that her regular jock (Corey Lanerie) is in town but not listed to ride.  #4 POSITIVE SPIRIT won the G2 Demoiselle by 10-lengths, but she’s tough to love.  They crawled around the track that day (1 1/8 miles in 1:56.01) and that may have just been a bad race (the Remsen, run two hours later, went in 1:51.34). #6 OXY LADY (6/1) has an outside shot. She ran well in the G1 Starlet at Los Alamitos and would appreciate a quick pace, which is expected.  Two of the fillies she raced against at Los Al (Enaya Alrabb, Mother Mother) ran very well since against the divisional leader Bellafina.

The Play: Win/Place bet on OXY LADY and box her up in an Exacta with SERENGETI EMPRESS and ERES TU.

As the first 85 Point Race on the Road to the Kentucky Derby, the Risen Star Stakes is essentially a ‘Win & You’re In’ prep for the Run for the Roses.  The winner receives 50 Points, which is more than enough to safely claim a spot in the gate on the First Saturday in May.  The favorite for the Risen Star is WAR OF WILL (5/2).  He’s been incredible since switching from turf-to-dirt and if he can overcome a far outside post (he’ll likely break from Post #13 as #13 KINGLY is expected to scratch.  That’ll still make for a wide trip, but WAR OF WILL should overcome it.  I expect a big run out of #10 LIMONITE (10/1) and both #1 PLUS QUE PARFAIT (10/1) and #3 MR. MONEY (12/1) drew well and will get involved late.

The Play: Play an Exacta with WAR OF WILL over PLUS QUE PARFAIT, MR. MONEY and LIMONITE.

Probably the weekend’s best race.  You’ve got three G1 winners (#1 PARADISE WOODS, #3 MARLEY’S FREEDOM - pictured above - and #4 DREAM TREE), two G2 winners (#2 SELCOURT, #5 MOPOTISM) and a G3 winner (#6 ESCAPE CLAUSE)…talk about a full house!  With SELCOURT, PARADISE WOODS and DREAM TREE in the field, the pace is going to be hot. That plays incredibly well for MARLEY’S FREEDOM, the beaten favorite in the G1 Breeders’ Cup Filly & Mare Sprint. That’s OK though.  She sandwiched that race with five victories, including a G1 Ballerina win at Saratoga.  This race has the potential to fall into her lap and she’s well suited to run 7-furlongs.

My colleague, Jeremy Plonk, made this his Xpressbet Race of the Week.  Check out his analysis and $100 wagering strategy.

The Play: Exactas and Trifectas with MARLEY’S FREEDOM over SELCOURT, DREAM TREE and ESCAPE CLAUSE.