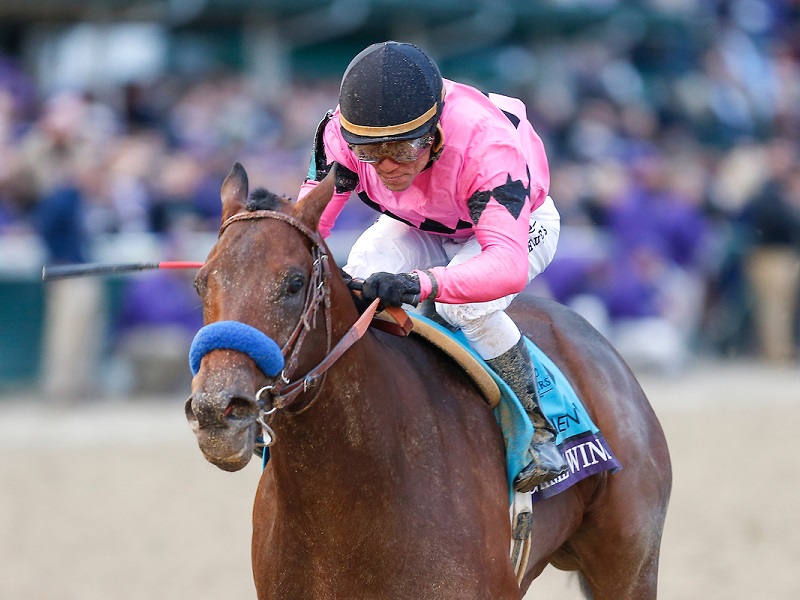 For the past several weeks, I have been putting together a Kentucky Derby Top 10 list. Here is my current Top 10:

No. 5 Hidden Scroll and No. 7 Signalman are entered in this Saturday’s Grade II Xpressbet.com Fountain of Youth Stakes at Gulfstream Park. The 1 1/16-mile event has drawn a field of 11. The Fountain of Youth contestants are in quest of 50-20-10-5 qualifying points for the May 4 Kentucky Derby.

Hall of Famer Bill Mott trains Hidden Scroll. Mott also conditions No. 6 Mucho, who makes his long-awaited return to the racing wars Friday against four rivals in a six-furlong allowance contest at Gulfstream. Mucho is an overwhelming 1-5 morning-line favorite.

Mucho has not raced since he finished second as the even-money favorite in the Grade I Hopeful Stakes at Saratoga last Sept. 3. The Kentucky-bred Blame colt looked like he might be one of the best 2-year-olds in the country when he registered a 9 3/4-length victory in a six-furlong maiden special weight race at Saratoga in early August.

I seriously considered dropping No. 9 Omaha Beach from my Top 10 this week because he reportedly has developed a quarter crack. The Kentucky-bred War Front colt “missed a few days” of training, Daily Racing Form’s Jay Privman reported. But I decided to keep Omaha Beach on the Top 10 for the time being because he still is on the Kentucky Derby trail. Omaha Beach, Privman noted, is “pointing to a mid-March stakes.”

Omaha Beach’s next race will likely be either Oaklawn Park’s Grade II Rebel Stakes at 1 1/16 miles on March 16 or Sunland Park’s Grade III Sunland Derby at 1 1/8 miles on March 24. Hall of Famer Richard Mandella trains Omaha Beach, who splashed his way to a nine-length win in a seven-furlong maiden special weight race on a sloppy track Feb. 2 at Santa Anita.

With the Run for the Roses now just a couple of months away, I have expanded my Kentucky Derby list this week to 50. Here are the horses ranked from No. 11 through No. 50:

No. 15 Roadster, No. 16 Nolo Contesto and No. 17 Dessman are entered in a one-mile allowance/optional claiming race at Santa Anita this Friday. It will be interesting to see what happens when these three highly regarded colts clash. Hall of Famer Bob Baffert trains both Roadster and Dessman. John Sadler conditions Nolo Contesto.

In addition to No. 5 Hidden Scroll and No. 7 Signalman, the Fountain of Youth field includes three others on my Top 50: No. 21 Code of Honor, No. 24 Global Campaign and No. 29 Bourbon War.

IS HIDDEN SCROLL THE REAL DEAL?

Hidden Scroll kicked off his racing career with a dazzling performance at Gulfstream on Jan. 26. Displaying early zip on a sloppy strip in a one-mile maiden special weight race around one turn, Hidden Scroll drew well clear from his foes to boast a 6 1/2-length lead at the quarter pole. His advantage ballooned to 11 at the eighth pole. And then, without being hard ridden by Joel Rosario, Hidden Scroll strolled home and won in splendid isolation by 14 lengths.

Hidden Scroll made 8-1 look like the overlay of the year.

According to Privman, Mott tried to get four different riders for Hidden Scroll’s first race. The trainer struck out all four times. Each of those four riders had a previous commitment. That proved quite fortuitous for Rosario, who was at Gulfstream that day from Southern California to ride Catapult (who finished fourth in the $6.7 million Pegasus World Cup Turf) and Accelerate (who ran third in the $9 million Pegasus World Cup).

Hidden Scroll not only won by a big margin, he recorded a 104 Beyer Speed Figure. The 104 matched the figure that Justify posted in his career debut when he burst on the scene early in 2018 at Santa Anita with a 9 1/2-length tour de force in a seven-furlong maiden special weight race.

In Justify’s next start after graduating from the maiden ranks, he registered a 6 1/2-length victory in a one-mile allowance/optional claiming race on a muddy track March 11 at Santa Anita. The supremely talented Kentucky-bred Scat Daddy colt would go to win the Grade I Santa Anita Derby, Grade I Kentucky Derby, Grade I Preakness Stakes and Grade I Belmont Stakes prior to being retired in July. After exiting the racing stage, this country’s 13th Triple Crown winner was honored with 2018 Eclipse Awards as champion 3-year-old male and Horse of the Year.

While Justify did not run in a stakes race until the Grade I Santa Anita Derby his third career start, Hidden Scroll is going directly into the Grade II Fountain of Youth following his maiden win.

My Fountain of Youth selections are:

Besides Hidden Scroll, the only two other Fountain of Youth entrants to have recorded a Beyer Speed Figure of 90 or higher are Vekoma (97) and Code of Honor (90).

Signalman likewise is making his 2019 debut. Trained by Ken McPeek, the Kentucky-bred General Quarters colt has not appeared under silks since he won the Grade II Kentucky Jockey Club Stakes on a sloppy track last Nov. 24 at Churchill Downs.

Bourbon War, who finished fourth in the Remsen, should not be taken lightly in the Fountain of Youth. Trained by Mark Hennig, the Kentucky-bred Tapit colt looked good winning a 1 1/16-mile allowance/optional claiming affair by 2 1/4 lengths at Gulfstream on Jan. 18.

Global Campaign, like Vekoma, is two for two. The Kentucky-bred son of two-time Horse of the Year Curlin won a seven-furlong maiden special weight race by nearly six lengths Jan. 5 at Gulfstream. That was followed by a 2 1/4-length triumph in a 1 1/16-mile allowance/optional claiming race there Feb. 9 for trainer Stanley Hough.

Australian wonder mare Winx attempts to extend her winning streak to 31 when she faces six opponents at 1,600 meters (about one mile) in this Saturday’s Group I Chipping Norton Stakes at Royal Randwick.

Chris Waller trains Winx and five of the other six Chipping Norton entrants.

Winx is coming off a 2 1/4-length victory in the Group II Apollo Stakes at Randwick on Feb. 16. Her final time of 1:20.88 broke Randwick’s record for 1,400 meters (about seven furlongs), which had been held by Trapeze Artist. Winx’s 1:20.88 clocking was the fastest she has ever posted in a 1,400-meter race during her illustrious career.

The legendary Phar Lap won the Chipping Norton in 1930. Phar Lap was shipped to Mexico and won the 1932 Agua Caliente Handicap in what would be the final start of his career. Iconic U.S. trainer Charlie Whittingham was at Caliente that day to see Phar Lap carry 129 pounds and win by two lengths while breaking the track record for 1 1/4 miles.

Years ago one morning at Santa Anita, I asked Whittingham who was the best horse he ever saw race.

“Phar Lap,” Whittingham said. “No doubt about it.”

Phar Lap ranks high on my list of the Top 100 Racehorses of the 20th and 21st Centuries to have raced in North America. I have Man o’ War at No. 1, followed in order by Secretariat, Citation, Kelso, Spectacular Bid, Native Dancer, Dr. Fager, Seattle Slew, Count Fleet, Affirmed, Ruffian, Swaps and Phar Lap.