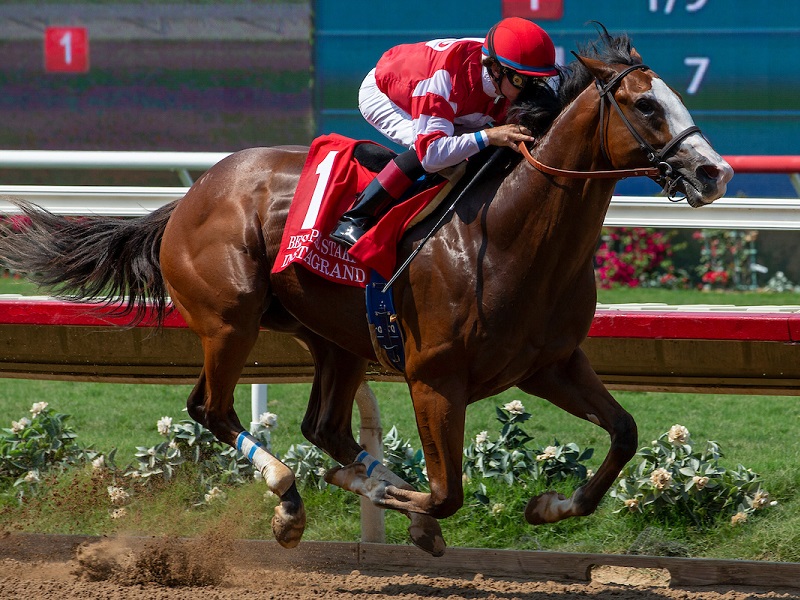 Last week, in this space, we outlined challenges facing Hidden Scroll in the Xpressbet Fountain of Youth at a very short price. Unfortunately, it was a case of ‘right church, wrong pew.’ Our suggested superfecta didn’t use Code of Honor in the top spot. This week, in the Grade 3 Gotham at Aqueduct, there’s an even shorter-priced favorite facing challenges. While questions surrounding Instagrand are different from those of Hidden Scroll, they exist.

In 2018, Instagrand was ranked as one of the top 2 freshman performers. He won both starts by at least 10 lengths—a maiden sprint in late June at Los Alamitos and the six-furlong, Grade 2 Best Pal Stakes at Del Mar in August. At that point owner Larry Best of OXO Equine LLC, contrary to the advice of Hall-of-Fame trainer Jerry Hollendorfer, elected to ensconce his $1.2 million purchase in bubble-wrap for the remainder of the season. The move abandoned a start in the Breeders’ Cup Juvenile and effectively erased a chance at an Eclipse Award as the nation’s top 2-year-old—in both cases Game Winner prevailed.

Best’s unorthodox theory posits that by curtailing the colt’s 2-year-old activity he will preserve Instagrand for a productive sophomore campaign and possibly even more racing at 4. Furthermore, the owner explained to Bloodhorse.com in September, even if Instagrand were to win 2 early races in 2019 the colt wouldn’t necessarily race in the Kentucky Derby! On a blackboard those Xs and Os may theoretically result in a touchdown! What actually transpires on the field following Saturday’s kick off is another matter.

Here are some challenges Instagrand will face Saturday at a short price:

Instagrand may be a legitimate superstar. A horse for the ages. Why not? We saw one last year and another two years before that. He may romp Saturday at less than even money. However, at that short of a price and facing several challenges, horseplayers are advised to approach the Gotham with eyes wide open! He’s got a better chance to win than Hidden Scroll did last week, but the price is aweful.

Below is one man’s analysis of The Gotham field:

This son of Fed Biz has 1 win from 7 career starts. That came over a ‘good’ Aqueduct surface in November at 7 furlongs. He’s faced stakes company in 2 of 3 starts this year without much success. To threaten in the Gotham he’d need to run faster than ever before. One positive is that he should get a legitimate pace to close into.

He pulled off a stunning 70-1 upset when racing first-time Lasix in the Breeders’ Futurity at Keeneland in October. He parlayed that into an almost as surprising 40-1 runner-up finish in the Breeders’ Cup Juvenile behind Game Winner. He ran a clunker in the Churchill slop to end 2018 and returned this year to show speed and then fade in the Sam Davis at Tampa. He figures to add speed to the early pace in here, but he’ll have plenty of company up front. Perhaps he’s already had his moments in the sun.

He’s got speed and a solid record of 3 wins in 5 starts, including 1-for-1 over the course and at the distance. He won the Jerome Jan. 1 with a wire-to-wire effort. The only real blemish on his running line is a disastrous outing at Churchill in the BC Juvenile. He had trouble at the start, so that race can be forgiven. Expect this one to be in the fight from start to finish. His trainer suggests the son of Stay Thirsty can rate a bit if needed. Of that’s the case, then he’s got a good chance in here.

This is not your typical sophomore Baffert shipper. The ridgeling son of Pioneer of the Nile has started twice on turf—a runner-up finish in the Zuma Beach at Santa Anita and a failed effort in the BC Juvenile Turf over soft turf at Churchill. Blinkers were added last time out in a Santa Anita sprint over a ‘good’ surface and they did the trick as Much Better won for the first time since September. He figures to show speed but one race back blew a decent lead in the stretch of the Sham Stakes at Santa Anita, so distance is a legitimate question. Also, he figures to have plenty of early company.

Three necks have decided Haikal’s trio of career races. Twice he’s won by a neck and once, first-time out, he lost by just a neck. He comes from off the pace and should get a favorable set up in here if…if he’s more than a late-running sprinter! This is his first try further than 7 furlongs. He’s made gradual speed-figure improvement in each start and that suggests there’s more in the tank. He’s an interesting option at a decent price, but demand value because, while his pattern suggests he will improve, he must to win.

This gelded, New York-bred son of Big Brown drops back to a mile after a game head defeat by Tax in the Withers at a mile and one-eighth. He’s fit and a repeat of his last is good enough to win. The issue with him is that he’s another with early speed. If this race develops the way it looks on paper, then there’s going to be an early logjam up front and that probably won’t help Not That Brady.

The son of Street Sense took money first-time out going seven furlongs and responded with a nearly two-length victory. He returned as favorite to finish third, two lengths behind Haikal, in the Jimmy Winkfield at seven furlongs. He’s got a great outside post position and enough speed to stalk the early pace. The real question is ‘How good is this colt?’ Figures say that, like others, with a bit of improvement he fits.

While this race doesn’t have as prominent a headliner as Instagrand, it’s an interesting tussle with #7 Win Win Win (5/2) entered as the 5/2 favorite. He’s trying two turns for the first time off an explosive, highly-rated sprint victory and has fired 2 strong bullet works in an attempt to gain his fourth victory out of 5 starts. He’s done very little wrong in 3 outings at Laurel and 1 at Tampa Bay.

#5 Well Defined (7/2), wire-to-wire winner of the Sam Davis at 7-1 when racing first-time blinkers, is the 7-2 second choice. He was able to stretch his speed out to a mile and one-sixteenth and never was challenged on the lead. He figures to have early company this time around, so he might not be as effective.

Next on the morning line at 4-1 is #4 Dream Maker (4/1), winner of his last start, an allowance race at Fair Grounds by over 8 lengths. He’s got 2 wins in 4 starts and has been favored in 3 of 4 lifetime starts. That victory was his first race since October, and it was much better than anything previous. Perhaps he’s come to life.

#11 Zenden (8/1) stretches out from a runner-up effort in the Grade 3 Swale at Gulfstream Park and seems to be improving. He’s 8-1 odds in here and will need to overcome the far outside post position but he’s got the right pilot in Sammy Camacho—a 28% rider at Tampa. He could be ‘live’ in here.

Another 8-1 shot that really ought to be examined closely is #6 Outshine (8/1) from the Todd Pletcher barn. Blinkers were added last out going 7 furlongs and the son of Malibu Moon responded with gusto and a two-length tally. He’s taken money in each start and has been favored twice. He could be a nice sleeper play.

#10 Tacitus (12/1) is an interesting runner from the Bill Mott outfit. He’s 12-1 on the line and is going from a maiden victory around a one-turn mile at Aqueduct to a two-turn mile and one-sixteenth Grade 2 stakes test. That’s a big jump. This son of Tapit does get Lasix for the first time and has shown ability in two starts.