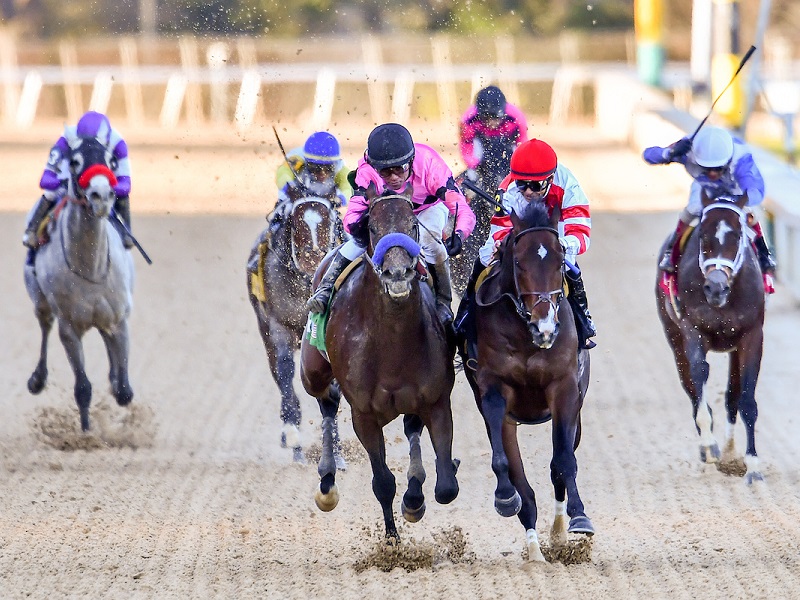 Nobody has stepped up yet to separate themselves from the pack among the leading contenders for the 2019 Kentucky Derby. This is demonstrated by the similarity in Beyer Speed Figures posted for all six stakes races decided so far in which the winner earned 36.5 or more qualifying points for the May 4 Run for the Roses. The winning Beyer for those six races ranges from a low of 92 to a high of 96, as listed below:

Along with the six winning Beyers listed above, the runner-up in each division of the 1 1/16-mile Rebel earned a figure in the same realm when narrowly beaten.

Improbable lost the first division of the Rebel by only a neck. He recorded a 95 Beyer. Game Winner lost the second division by a scant nose. His Beyer was 96.

In a race last Saturday not offering qualifying points for the Kentucky Derby, Alwaysmining dominated as a 1-2 favorite when he won Laurel’s Private Terms Stakes by 6 3/4 lengths. He was credited with a 96 Beyer, equal to what Omaha Beach and Game Winner recorded in the Rebel.

The original plan for Alwaysmining, who now has won five in a row, was to go on to Laurel’s Federico Tesio Stakes on April 20, then the Grade I Preakness Stakes at Pimlico on May 18. But Daily Racing Form’s Jim Dunleavy reports that Alwaysmining’s connections now are toying with the thought of foregoing the Tesio to instead try to earn Kentucky Derby points in either Keeneland’s Grade II Blue Grass Stakes or Aqueduct’s Grade II Wood Memorial. The Blue Grass and Wood both will be contested on April 6.

I had Game Winner ranked No. 1 last week on my Kentucky Derby Top 10, with Improbable at No. 2. Omaha Beach was No. 8.

In Game Winner’s first start since he captured the Grade I Breeders’ Cup Juvenile at Churchill Downs last Nov. 2, he lost his division of the Rebel by the slimmest of margins as a 1-2 favorite. It was the first defeat in five career starts for the Eclipse Award-winning 2-year-old male champion of 2018.

Despite Game Winner’s loss last Saturday, I seriously considered keeping him in the No. 1 spot this week. I questioned whether I should lower him from No. 1 after he lost by such a minuscule margin following a layoff.

But while it is true that Omaha Beach, unlike Game Winner, had raced this year prior to the Rebel, it’s to Omaha Beach’s credit that he won last Saturday despite taking a quantum leap in class. Omaha Beach went into the Rebel off a maiden victory.

If the photo finish had gone the other way or if it had been a dead heat, would there have been a stewards’ inquiry and/or claim of foul lodged by Smith against Game Winner and Joel Rosario? Considering the tight finish, would the stewards have disqualified Game Winner and placed him second for bumping Omaha Beach?

In any case, Omaha Beach’s victory last Saturday does demonstrate to me that he belongs in the higher echelon of Kentucky Derby contenders. After finishing second or third in his first four career starts, the Kentucky-bred War Front colt has really blossomed in recent weeks for Hall of Fame trainer Richard Mandella.

At this point, Omaha Beach is my choice to win the Kentucky Derby. Hence, I have moved him to the top of my rankings this week. But let’s just say Omaha Beach is occupying the No. 1 position by only a nose over Game Winner.

Long Range Toddy, trained by Hall of Famer Steve Asmussen, zooms up to No. 6 after I had him ranked No. 32 last week. In his best effort to date, he took the first division of the Rebel at 8-1 by running down Improbable in the final yards. It was Long Range Toddy’s fourth win from seven lifetime starts.

I dropped Galilean from the Top 10 this week. He finished third in the first division of the Rebel, though it should be kept in mind that he actually did pretty well to lose by 2 1/2 lengths after failing to get away to an alert start. He was No. 9 last week.

After Improbable’s narrow loss as a 2-5 favorite last Saturday, he no longer is undefeated. The Kentucky-bred City Zip colt was three for three going into the Rebel, which was his first start since a victory in the Grade I Los Alamitos Futurity last Dec. 8.

Baffert also conditions No. 5 Mucho Gusto and No. 7 Roadster. Mucho Gusto is entered in this Sunday’s Grade III Sunland Derby. Baffert has said Roadster will run next in the Santa Anita Derby.

Mucho Gusto is the Sunland Derby morning-line favorite at 8-5. Nine others are entered in the 1 1/8-mile race. The Sunland Derby offers 85 qualifying points (50-20-10-5) for the Kentucky Derby.

In Mucho Gusto’s lone 2019 start so far, he splashed his way to a 4 3/4-length triumph in Santa Anita’s Grade III Robert B. Lewis Stakes at 1 1/16 miles on a sloppy track Feb. 2. His only defeat in four career starts came when he finished second, five lengths behind Improbable, in the Los Al Futurity.

Anothertwistafate, trained by Blaine Wright, finished ninth on the dirt when unveiled at Santa Anita last Nov. 3. Since then, the colt has been unstoppable, reeling off three straight wins on Golden Gate’s synthetic surface.

In Anothertwistafate’s most recent appearance under silks, he registered a seven-length victory in the Grade III El Camino Real Derby at 1 1/8 miles on Feb. 16. In addition that to being a visually impressive performance, particularly insofar as the way Anothertwistafate powerfully kicked away from his foes in the lane, he recorded a 94 Beyer Speed Figure.

Mucho Gusto posted a 90 Beyer when he won the Lewis. That’s been his top fig to date.

Of course, the big question for Anothertwistafate this Sunday is whether he can continue his winning ways with a switch back to dirt.

Scat Daddy is the sire of Kentucky-bred Anothertwistafate. A son of Scat Daddy by the name of Justify did pretty darn well when racing on dirt last year. Justify was six for six in 2018, all while racing on dirt, highlighted by a Triple Crown sweep and a Horse of the Year title.

Long Range Toddy and Omaha Beach have something else in common besides winning their respective division of the Rebel Stakes at Oaklawn. They both are grandsons of the marvelous racemare and broodmare Take Charge Lady.

A multiple Grade I winner and earner of $2,480,377, Take Charge Lady made 22 career starts. The only time she raced at Oaklawn, she lost. But Take Charge Lady ran one of the finest races in defeat in the history of Oaklawn’s Grade I Apple Blossom Handicap. Take Charge Lady lost the 2003 Apple Blossom by a head when second to Azeri, a multiple Eclipse Award winner who was voted 2002 Horse of the Year. Azeri was inducted into the Hall of Fame in 2010.

Omaha Beach’s dam, Charming, is a daughter of Take Charge Lady. Charming also is the dam of Take Charge Brandi, who was voted a 2014 Eclipse Award as champion 2-year-old filly.

THE NEXT 40 ON MY KENTUCKY DERBY RANKINGS

I am picking War of Will to make it four consecutive victories on dirt when he runs in this Saturday’s Grade II Louisiana Derby at Fair Grounds Race Course & Slots. The 1 1/8-mile affair has attracted a field of 11. A total of 170 qualifying points (100-40-20-10) for the Kentucky Derby are up for grabs.

War of Will, trained by Mark Casse, lost the first four races of his career last year, all on turf. He then won a maiden special weight race by five lengths on dirt when the track was sloppy at Churchill last Nov. 24 in his final race at 2.

In a pair of starts earlier this year in New Orleans, War of Will proved he could succeed on dry land as well as on a wet track. The Kentucky-bred War Front colt won the Grade III Lecomte Stakes by four lengths on Jan. 19, then took the Grade II Risen Star Stakes by 2 1/4 lengths on Feb. 16 despite breaking from post 13.

Australia’s great Winx attempts to make it 32 consecutive victories when she starts in Saturday’s Group I George Ryder Stakes at Rosehill. It is scheduled to be the penultimate race of the mare’s illustrious career.

In her most recent start, Winx won the Chipping Norton Stakes by nearly two lengths at Randwick on March 2. It was the 23rd Group/Grade I victory of her career to break the world record of 22 such victories established by the Irish hurdler Hurricane Fly in Europe from 2008-15. America’s legendary gelding John Henry ranks third in terms of all-time Group/Grade I wins with 16.

The word from Down Under is that after the George Ryder, Winx will race for the final time in the Group I Queen Elizabeth Stakes at Randwick on April 13.