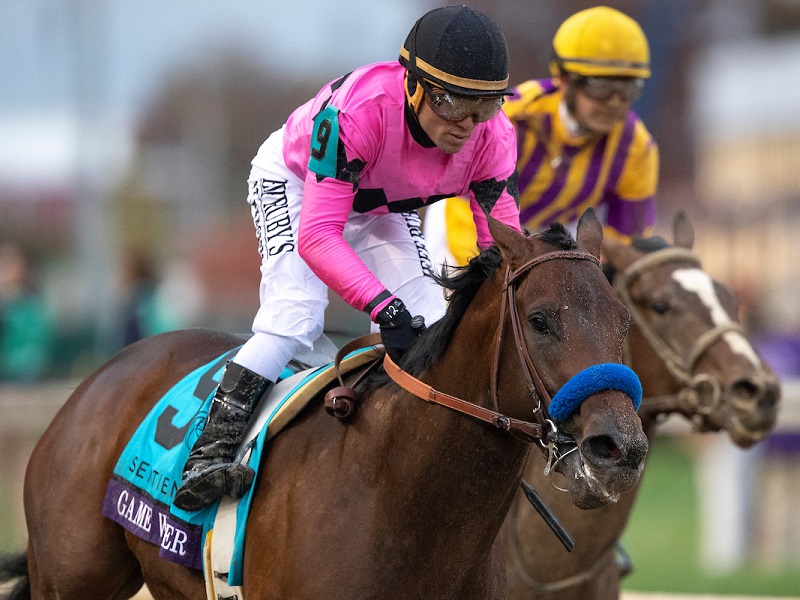 Invincibility took the last train out of Hot Springs after a division of the Oaklawn Park’s Grade 2 Rebel Stakes.

Game Winner took a different train and went home with a loss.

The unthinkable occurred: He lost in his 1st and only start of the year. He was unbeaten as a 2-year-old and is winless as a 3-year-old.

Game Winner, the champion 2-year-old male with a 4-for-4 record – the last one in the Grade 1 Breeders’ Cup Juvenile – made up almost two lengths in the final strides but came a nose shy of Omaha Beach. You’re going to have to forgive him going into today’s Grade I Santa Anita Derby, but it doesn’t mean you’ll have to single him in the late Pick 4.

Game Winner hasn’t lost a step, and to think so is absurd. He came up an inch or two short going 1 1-16th miles. The good news is that he might never run 1 1-16th miles again. He gets better the farther he runs and is the set for today’s 1 1-8 miles. There is no question he can get a 1 1-4 miles in Louisville on the first Saturday in May.

The Santa Anita Derby has a short field of six, but half of those are worthy of attention. Roadster, a talented stablemate of Game Winner’s, has been solid in two of three races. He’s been in only one stakes race, having finished third behind Game Winner in the Del Mar Futurity.

Instagrand was terrific in his 1st two starts, each won by 10 lengths (a maiden race at Los Alamitos and the Grade 2 Best Pal) and was third in his only start of this year when he finished just behind Haikal in the Grade 3 Gotham.

If all the favorites win in the Pick 4 races, the payoff will not amount to much. But these are good enough races that these aren’t forgone conclusions. The co-featured Grade I Santa Anita Handicap is similar as the Derby, with a trio of serious candidates including McKinzie, Gift Box and the up-and-comer Campaign.

McKinzie battled throughout and lost at the end of the Grade 2 Pasqual as the late Battle of Midway got the best of him by a half-length. The winner scorched the track in 1:46 4-5 for the 1 1-8 miles.

Gift Box beat Battle of Midway in his only start on the West Coast. After running exclusively in New York for trainer Chad Brown, he was transferred to the John Sadler barn responded with a sharp win in the Grade 2 San Antonio. He’s been idle since that Dec. 26 race.

Campaign is an upset possibility for those finishing around for a price. He’s won three of his last four and also recently join the Sadler barn, this time sent from Steve Asmussen. He has not yet battled this type but has an excellent late run and should appreciate a fast pace and the 1 1-4-mile distance.

Here’s the suggested ticket for the Pick 4 at Santa Anita: