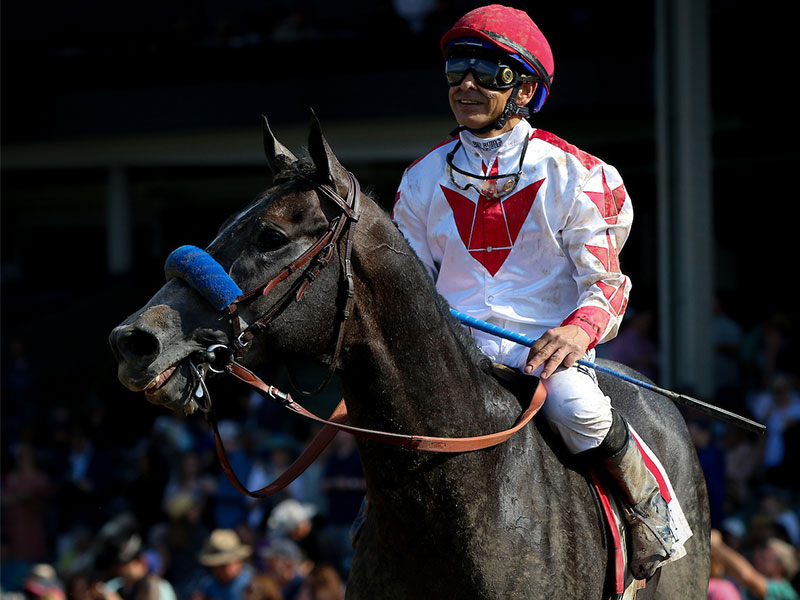 It’s also a good thing for Baffert that, while he now can breathe easy, throat surgery was not required for him to do so, as was the case with Roadster.

Prior to Roadster’s first appearance under silks last summer at Del Mar, he was being touted as a special colt. Hammered down to 4-5 favoritism at first asking on July 29, he raced third early and drew away in the stretch to win a six-furlong maiden special weight race by 4 1/4 lengths.

Because of all the hype and his impressive debut, Roadster was sent off as the 3-5 favorite in the Grade I Del Mar Futurity on Sept. 3. But he lost that seven-furlong race by two lengths, finishing third behind 8-5 Game Winner and 7-1 Rowayton.

Game Winner became Baffert’s 14th Del Mar Futurity winner. No other trainer has dominated any of this country’s current Grade I races to such an extent.

After the Del Mar Futurity, Game Winner won the Grade I FrontRunner Stakes at Santa Anita and Grade I Breeders’ Cup Juvenile at Churchill Downs. He was voted a 2018 Eclipse Award as champion 2-year-old male.

As for Roadster, he was found to have had a throat obstruction when he ran in the Del Mar Futurity. Consequently, he underwent throat surgery.

On March 1 at Santa Anita, Roadster returned to the races. He won a one-mile allowance/optional claiming race by 2 1/2 lengths at odds of 4-5. The runner-up in the field of five was 3-5 favorite Nolo Contesto.

Roadster then turned the tables on Game Winner when they had their rematch in the Santa Anita Derby. Yes, Game Winner now has lost both of his starts this year. Nevertheless, he remains a serious win candidate for the May 4 Kentucky Derby.

In Game Winner’s first 2019 start, he lost a division of Oaklawn Park’s Grade II Rebel Stakes by the slimmest of margins to Omaha Beach on March 16. That certainly was a fine effort by Game Winner in defeat from the standpoint that he had not raced since the Nov. 2 BC Juvenile.

Game Winner subsequently lost the Santa Anita Derby by a half-length, but a case can be made he might well have won if not for a wide trip. Indeed, according to Trakus info, he traveled 38 feet, or approximately four lengths, farther than Roadster.

Actually, only one of Baffert’s nine Santa Anita Derby winners has gone on to capture the Kentucky Derby. That was Justify last year.

These are Baffert’s nine Santa Anita Derby winners, with their Beyer Speed figure in parentheses:

On the backstretch during last Saturday’s 1 1/8-mile Santa Anita Derby, Roadster dropped back. It looked like maybe he was not going to fire. But it turned out that his Hall of Fame jockey, Mike Smith, simply was in no hurry.

When Smith decided the time had come to ask Roadster to make his move, the Quality Road colt readily did so. Roadster produced a sustained rally in the final quarter to prevail by a half-length in 1:51.28 on a racing surface not producing anything close to fast times during the entire afternoon.

Justify’s final time in last year’s Santa Anita Derby was 1:49.72. As I wrote last year, that clocking would have been faster if not for what Baffert and others described as a very deep and tiring surface, a view supported by Justify being assigned a 107 Beyer, a figure positively impacted by the slower-than-usual surface as quantified by the track variant.

While the track for the 2018 Santa Anita Derby was considered by many to be very deep and tiring, it seems the surface for this year’s renewal was even slower. Roadster was credited with a 98 Beyer for his Santa Anita Derby performance. Some feel a 98 is too high vis-a-vis the 1:51.28 final time.

“Different tracks may have very different racing surfaces,” Beyer wrote. “And the inherent speed of a racing surface can change from day to day. That is why the most important part of making speed figures is to determine the speed of the track.

“The racing surface for the Santa Anita was slower than the Keeneland track was for the Blue Grass. That’s the simple reason that Roadster earned a higher figure for running 1:51.28 than Vekoma did for running 1:50.93.”

Roadster moves up to No. 4 on my Kentucky Derby Top 10 this week after being No. 8 last week. I am keeping him a notch below Game Winner due mainly to the champ’s wider trip last Saturday.

No. 8 Anothertwistafate is entered in Keeneland's Grade III Lexington Stakes. The 1 1/16-mile race has 10 entered.

War of Will moves back onto my Top 10 this week following his four-furlong workout in :48.80 at Keeneland last Saturday morning for trainer Mark Casse. I had taken War of Will off my Top 10 after he finished ninth as the 4-5 favorite in the Grade II Louisiana Derby on March 23.

In what has to be considered a quirky incident, War of Will abruptly lost his footing behind in the first few strides of the Louisiana Derby. He came out of the race with a strained patellar ligament, according to Casse. But in War of Will’s four-furlong drill last Saturday with jockey Tyler Gaffalione in the saddle, the colt suggested it might be unwise to disregard him in the Run for the Roses because of what occurred in the Louisiana Derby.

“Tyler came out and said he never felt better, and that made my day,” Casse said to BloodHorse’s Claire Crosby following War of Will’s workout. “I told Tyler I wanted him to go between :48 and :49. He said about the top of the lane, he reached up and grabbed (War of Will) and he took off. He was like, ‘Whoa, big boy!’ And he galloped out strong. It’s a small miracle.”

Prior to War of Will’s Louisiana Derby debacle, he had won the Grade III Lecomte Stakes by four lengths and Grade II Risen Star Stakes by 2 1/4 lengths. On more than one occasion, Casse has called War of Will “a superstar.”

Roadster was a slight 6-1 favorite in Pool Four of the Kentucky Derby Future Wager (KDFW) that closed last Sunday. This was the final of the four future wager pools for the 2019 Kentucky Derby. The previous three pools closed on Nov. 25, Feb. 10 and March 10.

Game Winner and Grade I Florida Derby winner Maximum Security were each 7-1. Improbable and Tacitus were each 8-1. Omaha Beach was 10-1.

War of Will closed at 23-1. I think that is a terrific price. No matter what happens, I see it as tremendous value. That’s because if War of Will had won the Louisiana Derby, as many had expected him to, he almost certainly would have been 10-1 or lower instead of 23-1 in the KDFW.

A prime example of just how much one defeat can skew a price significantly upward occurred in 1995. Thunder Gulch won the Grade II Fountain of Youth Stakes and Grade I Florida Derby, but then finished fourth as a 6-5 favorite in the Grade II Blue Grass.

Here were the final odds for Pool Four of the 2019 KDFW:

In terms of my Derby Strikes System, Wood winner Tacitus and Blue Grass victor Vekoma each have one strike. Santa Anita Derby winner Roadster has two.

I introduced my Derby Strikes System in 1999. The system consists of nine key factors. When a horse does not qualify in one of the nine categories, the horse gets a strike. The nine key factors (or categories) are explained at the end of this column.

Tacitus and Vekoma each get a strike in Category 6, the “racing experience” category. One of Roadster’s two strikes also comes in Category 6. I consider Category 6 to be by far the least important of the nine categories because horses just do not race as much nowadays as they did back in the day.

From 1973 through 2000, Fusaichi Pegasus was the only horse to get a strike in Category 6.

But from 2001 through 2018, seven horses -- Barbaro, Big Brown, Animal Kingdom, I’ll Have Another, American Pharoah, Always Dreaming and Justify -- got a strike in Category 6 for making fewer than six starts before the Kentucky Derby.

In terms of the Derby Strikes System, it’s not until a horse’s next race will be the Kentucky Derby that a horse’s number of strikes can be determined. These are the strikes for a number of the leading Kentucky Derby point earners as listed by Churchill Downs when the leaderboard was updated on April 6, plus Master Fencer, who gets a spot in the field for having the most points in the Japan Road to the Kentucky Derby:

Australia’s super mare Winx is scheduled to race for the final time Saturday against eight rivals in the Group I Queen Elizabeth Stakes at Royal Randwick. She will be bidding for her 33rd straight victory. The streak began on May 16, 2015.

Winx holds the world record of 23 Group/Grade I wins. The Irish hurdler Hurricane Fly recorded 22 such victories in Europe from 2008-15. America’s legendary gelding John Henry ranks third in terms of all-time Group/Grade I wins with 16.

1. THE GRADED STAKES FACTOR. (The horse ran in a graded stakes race as a 3-year-old before March 31.) This points out horses who have competed against tough competition at 3 prior to March 31 rather than at the last minute in April, enabling the horse to be properly battle-tested. (Exceptions: Since the introduction of graded stakes races in the U.S. in 1973, only Genuine Risk in 1980, Sunny’s Halo in 1983, Mine That Bird in 2009, Always Dreaming in 2017 and Justify in 2018 have won the Kentucky Derby without running in a graded stakes race at 3 before March 31.)