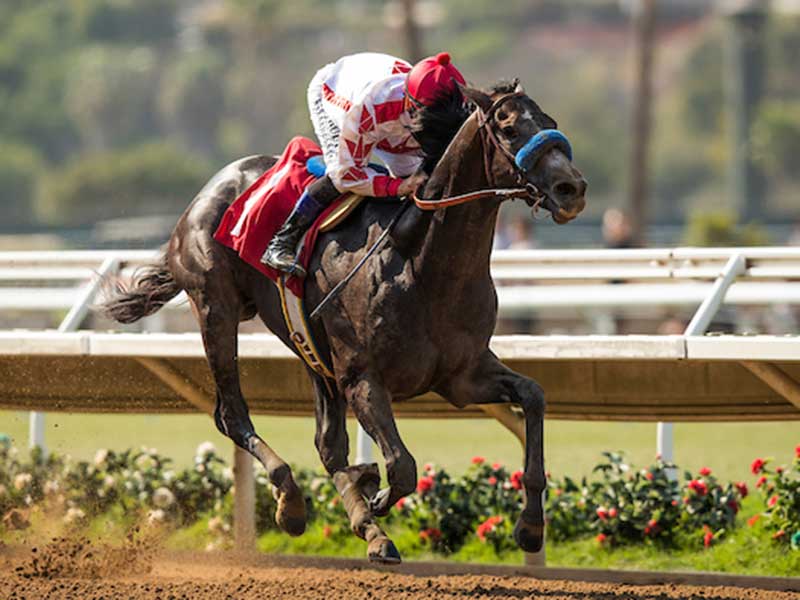 The field for the upcoming $3 million Kentucky Derby has taken shape. With that in mind, it seemed this would be an appropriate time to calculate projected odds for the 20 horses to have earned enough points and are currently listed as intended starters in the 1 1/4-mile classic.

Ever since Churchill Downs instituted the points system in 2013 to determine eligibility to start in the Kentucky Derby, six straight favorites have won: (Orb in 2013, California Chrome in 2014, American Pharoah in 2015, Nyquist in 2016, Always Dreaming in 2017 and Justify in 2018).

Who will be the favorite this year? And will the favorite extend the string of punctual Kentucky Derby favorites to seven?

When the 2019 Run for the Roses commences on May 4, I expect Omaha Beach to be the favorite. I am projecting his odds at 9-2. He might end up being a smidge lower or higher, but I think 9-2 certainly is in the ballpark.

Omaha Beach goes into the Kentucky Derby following back-to-back wins at Oaklawn Park. He took a division of the Grade II Rebel Stakes on March 16 and then the Grade I Arkansas Derby on April 13.

Baffert has not one, not two, but three Kentucky Derby contenders this year. In addition to Game Winner and Improbable, the white-haired horseman will be represented by Roadster. After Omaha Beach at 9-2, I have Roadster at 5-1 in my projected Kentucky Derby odds.

Hall of Famer “Big Money” Mike Smith won the Santa Anita Derby aboard Roadster on April 6 and the Arkansas Derby with Omaha Beach on April 13. The fact that Smith has opted to ride Omaha Beach on May 4 instead of Roadster is one of the reasons that I envision Omaha Beach being sent away as the Kentucky Derby favorite.

If Baffert does win another Kentucky Derby this year, he will equal Ben Jones’ longstanding record for most victories in this race by a trainer.

I have a gut feeling that Wood Memorial winner Tacitus is going to get quite a lot of support in this year’s Kentucky Derby. I have pegged him at 6-1.

There is a lot to like about Tacitus. He has an outstanding trainer in Hall of Famer Bill Mott. Tacitus also sports an enviable pedigree. He’s a son of premier sire Tapit and multiple Grade I winner Close Hatches.

Tacitus will be taking a three-race winning streak into the Kentucky Derby. In his most recent start, he proved his mettle by registering a 1 1/4-length victory in Aqueduct’s Grade II Wood Memorial at 1 1/8 miles despite getting knocked around early.

I think Maximum Security is the trickiest horse to try and forecast what his odds will be when he leaves the starting gate in the Kentucky Derby. There are those who like Maximum Security a lot, while many others are throwing him out. I decided to put him at 12-1, but I would not be shocked if Maximum Security does start at a shorter price off his speed figures.

Maximum Security is the only horse in this year’s Kentucky Derby to boast two triple-digit Beyer Speed Figures. He recorded a 102 Beyer when he won a seven-furlong allowance/optional claiming race by 18 1/4 lengths at Gulfstream Park on Feb. 20. Maximum Security then earned a 101 when victorious by 3 1/2 lengths in Gulfstream’s Grade I Xpressbet.com Florida Derby at 1 1/8 miles on March 30.

Omaha Beach will be the only other starter in this year’s Kentucky Derby to have ever posted a triple-digit Beyer Speed Figure. He was credited with a 101 Beyer in the Arkansas Derby.

These are my projected odds for each of the 20 horses listed by Churchill Downs as one of the 20 intended starters in the 2019 Kentucky Derby:

There are no changes to my Kentucky Derby rankings from last week:

In 1999, I formulated my Derby Strikes System. The system consists of nine key factors that attempt to ascertain the chances a horse has to win the Kentucky Derby from both tactical and historical perspectives. When a horse does not qualify in one of the nine categories, the horse gets a strike. The nine key factors (or categories) are explained at the end of this column.

Horses just do not race as much these days as when I developed the Derby Strikes System in 1999. I now consider Category 6, in which a starter gets a strike for having made fewer than six career starts, to be by far the least important of the nine categories. Category 6 just isn’t as important as it was during the 1970s, 1980s and 1990s.

From 1973 through 2000, Fusaichi Pegasus was the only Kentucky Derby winner to get a strike in Category 6 for making fewer than six career starts prior to the Run for the Roses.

But from 2001 through 2018, seven Kentucky Derby winners -- Barbaro, Big Brown, Animal Kingdom, I’ll Have Another, American Pharoah, Always Dreaming and Justify -- got a strike in Category 6.

In terms of the Derby Strikes System, it’s not until a horse’s next race will be the Kentucky Derby that a horse’s number of strikes can be determined. Of the 20 horses currently listed by Churchill Downs as intended starters in this year’s Kentucky Derby, only Omaha Beach and Game Winner have zero strikes. Eight of the 20 have only one strike. According to the Derby Strikes System, there is a very good chance that the 2019 Kentucky Derby winner is going to be one of the 10 horses with zero strikes or one strike.

Below are the strikes for each horse listed by Churchill Downs as one of the 20 intended starters in this year’s Kentucky Derby:

KENTUCKY DERBY WINNER’S STRIKES FROM 1973 THROUGH 2018

1. THE GRADED STAKES FACTOR. (The horse ran in a graded stakes race as a 3-year-old before March 31.) This points out horses who have competed against tough competition at 3 prior to March 31 rather than at the last minute in April, enabling the horse to be properly battle-tested. (Exceptions: Since the introduction of graded stakes races in the U.S. in 1973, only Genuine Risk in 1980, Sunny’s Halo in 1983, Mine That Bird in 2009, Always Dreaming in 2017 and Justify in 2018 have won the Kentucky Derby without running in a graded stakes race at 3 before March 31.)

Jockey Craig Perret and female racehorse Royal Delta have been elected to the Hall of Fame this year, it was announced Monday.

Perret, who won 4,415 races during his career, was voted a 1990 Eclipse Award as outstanding jockey. He finally received enough votes this year to get into the Hall of Fame after having coming up short as a finalist many times.

Royal Delta won three Eclipse Awards. She was voted champion 3-year-old filly in 2011 and champion older female in 2012 and 2013.

Perret and Royal Delta were the only two of the nine finalists on the contemporary ballot this year to receive the majority approval (50.1% or higher) from the voters required for Hall of Fame induction.

The contemporary finalists this year who did not receive enough votes to get into the Hall of Fame were trainers Mark Casse, Christophe Clement and David Whiteley, along with racehorses Blind Luck, Gio Ponti, Havre de Grace and Rags to Riches.

This was the first year that Rags to Riches was a Hall of Fame finalist. As I have stated many times, I believe she belongs in the Hall of Fame.

Rags to Riches is one of just four fillies to have won a Triple Crown race in the last 95 years. In 2007, she became the first filly to win the Belmont Stakes in 102 years.

Female racehorses My Juliet and Waya also will be inducted into the Hall of Fame this summer. They were chosen by the Historic Review Committee.

The 2019 Hall of Fame ceremony will take place on Aug. 2 at the Fasig-Tipton sales pavilion in Saratoga Springs, N.Y.