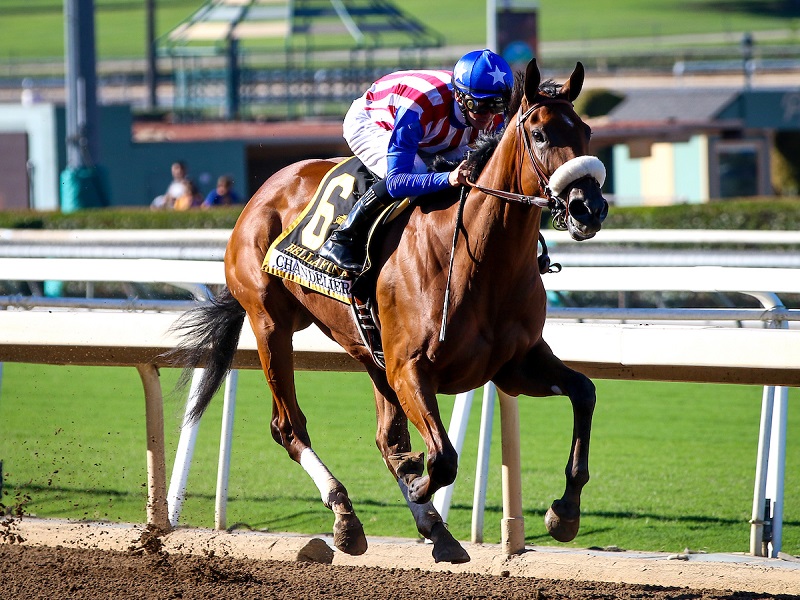 The lineup for Friday’s 145th running of the Grade 1 Kentucky Oaks is set. And while we analyze the Kentucky Derby hopefuls for months on end leading up to the first Saturday in May, for many, the Oaks handicapping exercise becomes a much more everyday encounter. Here’s a lead-in look at the leading ladies for Oaks 145.

Unbeaten in 3 starts this year and a winner in 6 of her last 7 outings, the Churchill Downs question will loom large given her fourth-place mis-fire there in the Breeders’ Cup Juvenile Fillies. Trainer Simon Callaghan’s 44% win rate in 2019 is almost too sharp to be taken seriously, but also impossible not to take into consideration. Sire Quality Road swept this year’s Santa Anita Oaks and Derby with Bellafina and Roadster, and, oh, what a weekend it could be for those two and their sire.

A blinkers-on winner of the Gulfstream Park Oaks, this is a daughter of Churchill-freaking Street Sense. Trainer Ian Wilkes comes off a strong showing at Keeneland and this filly has yet to miss a superfecta in 7 starts. She didn’t show her best on a sloppy track in the Golden Rod locally, so the hope here may be for faster footing.

Drawn in post 14, the consistent, but hard-lucky filly looks to snap a 3-race losing streak that dates back to last October’s Grade 1 Alcibiades. Her runner-up tries in the Breeders’ Cup Juvenile, Golden Rod and Ashland haven’t tarnished her reputation, but may inflate her price some. She was 3-1 or less in each of those and hasn’t been over 3-1 since her debut. While post 14 may not seem ideal, we’ve seen the last 3 Oaks go to the 14-13-12 and another 12-hole within the last 5 years. Trainer Kenny McPeek twice has been Oaks runner-up (’02 Take Charge Lady, ’17 Daddy’s Lil Darlin) and has had superfecta finishers in this race 2 straight years.

Again, don’t fret the 13-hole draw given recent Oaks history. Be more worried about the highs and lows with this Tom Amoss trainee. She’s got 4 wins by more than 41 lengths, including 19 and 13-length whoppers, and then 2 losses by 67 lengths in the Breeders’ Cup Juvenile Fillies and Fair Grounds Oaks. She bled through Lasix in New Orleans as the 3-10 favorite last out, so what you get Friday could be anyone’s guess. The one thing you can probably feel most sure about is not using her on the bottom of the exacta. It’s win or waylaid for this filly.

The champion 2-year-old filly of 2018 has been beaten at 1-5 and even-money odds in the Davona Dale and Ashland so far this year. But she romped by 5-plus in the Juvenile Fillies at Churchill Downs in November in what seems so long ago now. John Servis teamed with Javier Castellano in 2016 to victorious success in the Kentucky Oaks by way of Cathryn Sophia, who also came off a puzzling third in the Ashland. Servis’ talk after Jaywalk’s loss in the Ashland was among the most optimistic you’ll ever hear from a heavy favorite in defeat. He’s either got them right where he wants them, or could talk you out of a full-house with a pair of deuces.

Upset winner of the Fair Grounds Oaks at 10-1, she exits a key Kentucky Oaks prep of the last decade-plus. Trainer Larry Jones has been remarkable in this race, winning with Proud Spell (2008), Believe You Can (2012) and Lovely Maria (2015). She’s getting better at the right time and didn’t miss a superfecta in her 4 route tries this winter/spring at Fair Grounds.

From the author of the greatest Kentucky Oaks upset in history, 47-1 Lemons Forever in 2006, Dallas Stewart brings a 52-1 Ashland Stakes heroine back to Churchill Downs. This daughter of Kentucky Derby runner-up Hard Spun has won 3 of her 4 starts since stretching out around 2 turns and will be happy as a mud-lark if it rains. Recent Oaks winners Lovely Maria (’15) and Cathryn Sophia (’16) and Monomoy Girl (’18) came out of the Ashland.

Bob Baffert knows his way around Churchill Downs with the colts and fillies this time of year, having won the Oaks 3 times (’99 Silverbulletday, ’11 Plum Pretty and ’17 Abel Tasman). This lightly raced filly has just 3 career starts and a single debut sprint victory, and she’s out of a sprint mare in Sacristy. The last Oaks winner this lightly raced was Bobby Frankel’s Flute in 2001.

Steve Asmussen’s Curlin filly swept 3 starts at Oaklawn this season, including the G3 Fantasy at 9-1 odds. This barn has had Oaks glory with Summerly (2005) and Untapable (2014), but those winners were much closer to the public vest.

Stuck on the also-eligible list because she came up short on the Oaks points system, the second wagering choice in the morning line of Mike Battaglia may not make the gate. She’s had but 2 career starts and was runner-up as the 6-5 favorite in the Gulfstream Park Oaks after a smashing May 3 debut win. Chad Brown trains the daughter of Quality Road, the same sire as morning line favorite Bellafina.