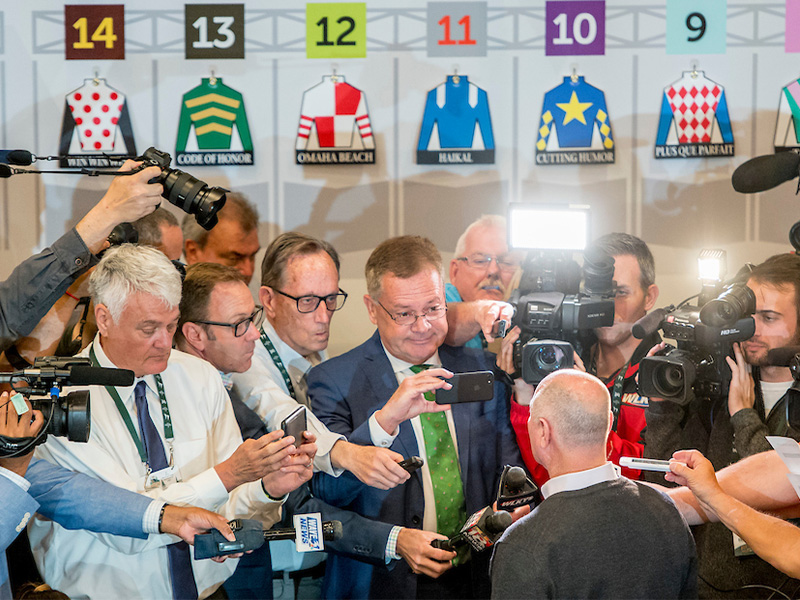 A Kentucky Derby seemingly lacking pace wound up inside-heavy with what pace there was, making for an interesting assessment of today’s Kentucky Derby post-position draw. I projected 6 horses with some front designs and five of them drew in the first 7 spots. The one pace-potential outlier, favorite Omaha Beach, gets to track outside the potential melee in the 12-hole.

Not only was the draw outstanding for Omaha Beach in terms of the pace being inside of him, but the horses immediately outside of him generally are devoid of speed. You have to get all the way out to the 17 (Roadster), 18 (Long Range Toddy) and 19 (Spinoff) to find horses who may be hustled and immediately start the inward dive that clogs so many horses early in so many Derby renewals. That’s why the 14-hole, where there’s a gap between runners to the auxiliary gate, absorbs almost a running of the bulls and is such a terrible post annually. Win Win Win will have to find solace from that 14-hole with an unknown Japanese raider to his outside and the trio of potential cross-over types in 17-18-19.

Maximum Security should be well-positioned in the 7-hole to the outside of Vekoma, Improbable, Gray Magician and War of Will, who drew the deal-breaking rail post. Improbable’s gate antics at Oaklawn may have been induced by the blinkers that are now removed. Still, being next to him in the gate has some potential anxious moments. Everything has to go right for first-over pressers like War of Will and Vekoma on paper and they look to be in tough spots now, especially the former. Tax in post position 2 will have to be used more than expected and he’s not as fast as some of these and could get the big squeeze as Gray Magician, Improbable, Vekoma and Maximum Security all seek to secure position into the clubhouse turn. Plus, Tax has had some issues at the start, so it may be messier than usual down on the inside.

Given all that 1-though-7 potential pace, what a great trip Tacitus could receive if he breaks clean from post 8. Think of all the wide open space to his inside once the pace players leave there. He could tuck inside nicely in the middle to back-third flight. After a rugged Wood trip, he’s owed some good fortune. On paper, Omaha Beach and Tacitus appear to be my post-draw winners with the Maximum Security camp having to like where they’re at.

Bob Baffert’s duo of Game Winner and Roadster should be okay from 16 and 17, but they’re not widely benefitted. It’s an anomaly that 17 has never won the Derby, but if the Apollo curse can be exorcised by the white-haired one, then the 17-hole could meet its maker, too. As for the 20-hole blues, it looks inconsequential as Country House projected to be 19th or 20th early in the running anyway, taking back and trying to pick off runners.

Bodexpress will be on the also-eligible list and only draw into the field in the event of a scratch before Friday at 9 a.m. ET. If he gets in, he’ll have the widest available post draw.

Rain is in the forecast for Thursday, Friday and Saturday in Louisville. We’ve seen sloppy track overland closers like Orb and rail-skimming victors like Mine That Bird. And horses up on the pace like Go For Gin and Justify have scored in the goo. The safest bet is to not overinflate the importance of the conditions.