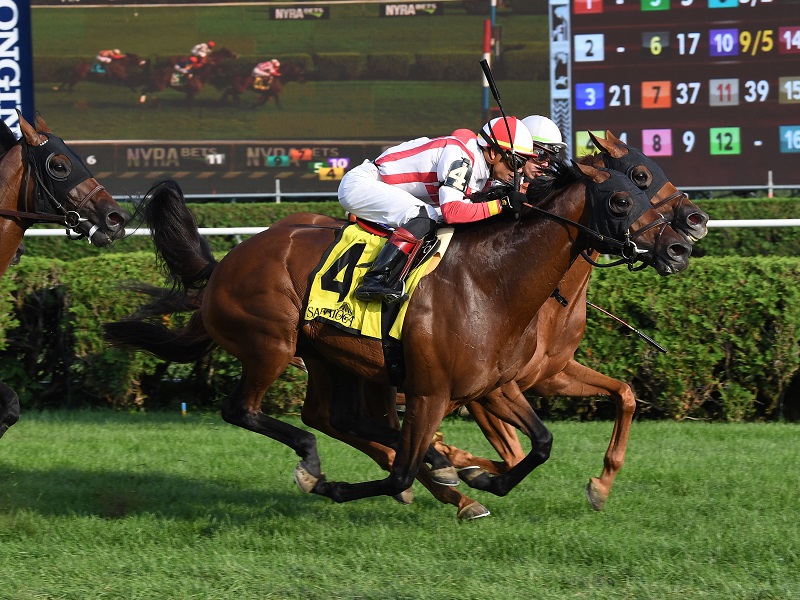 Big Saturday at Belmont? That’s not supposed to happen for a few weeks, right? Well, someone forgot to tell the fine folks at the New York Racing Association that, because their Saturday, May 11 card could practically double as the Belmont Stakes undercard.

Here’s a look at the stakes races on the card:

Plus, to help get you started, my colleague Jeremy Plonk handicapped the Man O’ War as his Xpressbet Race of the Week. Follow that link to get his horse-by-horse analysis and $100 Betting Strategy.

The sequence kicks off with a big-field turf maiden race and all of the usual suspects you’d expect to see in a race like this – Chad Brown, Graham Motion, Bill Mott, Shug McGaughey, Christophe Clement and Kiaran McLaughlin – are accounted for. Graham Motion’s VARENKA competed in three stakes races as a maiden last fall and she even finished fifth in the Breeders’ Cup Juvenile Fillies Turf at Churchill. She’s obviously the class of the field but it’s hard to trust a filly that’s 0-for-4, seems one-paced and is coming off a 6+ month layoff. Chad Brown’s STRUCTURAL DEFICIT checks every box and, as is the case with Chad Brown horses in races like this, you just kind of have to use her. Larger tickets may look to Bill Mott’s SAN SARIA, who adds blinkers after she kind of just loped behind the field in her debut at Gulfstream, John Terranova’s PALLAS ATHENE and Godolphin’s ROMANTIC PURSUIT.

SKYLER’S SCRAMJET nearly won the Grade 1 Carter Handicap last month and the horse that beat him that day – World of Trouble – is one of the best sprinters in the world. Problem with ‘SKYLER’ is he hasn’t slammed the door on a field since March 2018 and he always just seems to come up a bit short late. FIRENZE FIRE was a dud in his seasonal debut at Tampa in March, but not every horse likes that track and maybe he was a bit short. He’s 2-for-2 at Belmont. KILLYBEGS CAPTAIN is a top not sprinter and should be on your ticket as well, as well as RECRUITING READY.

The day’s feature is the Grade 1 Man O’ War and I see this as a two horse racing. Representing Ireland you’ve got MAGIC WAND and representing the US it’s FOCUS GROUP. Aidan O’Brien sent over two horses for this race, but MAGIC WAND seems to be the preferred horse from that barn. She’s just 2-for-12 lifetime but O’Brien’s ‘better’ rider (Wayne Lordan) landed on her over HUNTING HORN and she seems to be the best horse in the race. FOCUS GROUP overcame a pedestrian pace to close up the rail to win the Grade 2 Pan American Stakes at Gulfstream in March and he has been getting better with every start for Chad Brown. He should get a pace this time around. ZULU ALPHA nestles into a better inside post after being marooned outside in the Grade 2 Elkhorn and he’s a horse worth adding if you have the bankroll.

The Belmont finale is a solid maiden race for statebreds and this strikes me as a wide-open event. Linda Rice horses generally excel in their second start, so ELEKTRONIC has to be on the ticket. He ran well in his debut on April 18. QIAN B C ran the best race of his life in his first start off the layoff in ELECTRONIC’s debut, so you should use him too, and WICKED GRIN exists that race as well. So we’re using the 2-3-4 finishers from that day and let’s also use DOVE SHOOT, who gets John Velazquez to stay around late in the card.