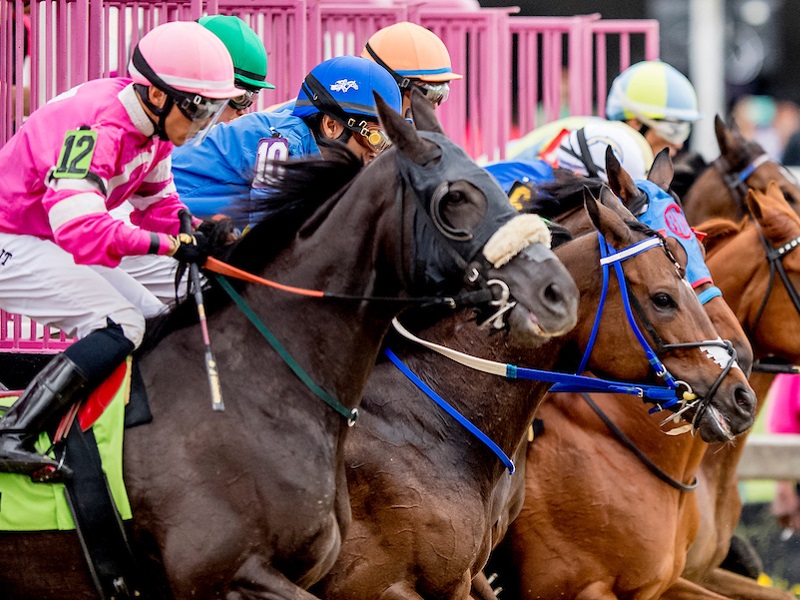 Let’s take our second of three planned breaks from the Stronach 5 to take a shot at Friday’s big 300k guaranteed all-stakes Pk4 (R8-11) at Pimlico, in what is undoubtedly a doozy of a sequence.

We kick off the sequence with nothing short of an impossible sprint, which figures to stretch a bankroll mighty thin, especially since the race is loaded with speed, and the majority of the favorites want to be on or just off the early lead. So, it likely comes as little surprise that I’m going to look to the stalker/closers who have shown the ability to pass horses in the lane, as this one just looks destined to side their way, with all the quality speed signed on. I don’t think you’ll see 15-1 on #8 TOMLIN, but that’s where I’ll go on top (in a deep spread), since she can close, gets the best finishing rider there is in Rosario, and fits on paper off her last, when 3rd to a repeat winner. It’s a positive sign Lynch starts #5 CONGRATS GAL (8-1) in this spot off a November layoff, and she’s another who can stalk and pounce, while getting first run on the pick too. A hint of a rating gear will also serve #7 MISS IMPERIAL (8-1) and #4 PLEASE FLATTER ME (8-1) well, and with the Ortiz brothers riding, you would think they can elevate the form of a pair of fillies who are just a cut below the favorites on paper. The biggest reach on the A-line is #10 BYE BYE J (12-1), who won a state-bred stakes in painfully slow time at OP but showed when she romped there three-back (albeit in a state-bred AOC) that she can run fast too, and she’s another who will be midpack and ready to roll off the far turn.

One of the reasons I went so deep in the first leg is that I think you can lock this one up with either #2 NOVA SOL (7-2) or #5 DOGTAG (9-2), who figure decided favorites for Brown. The former makes her US debut and adds Lasix off a European 2yo campaign that ended with a close 3rd in a GIII at Deauville in October, and the fact she’s since been privately purchased by Dubb (among others), and will wear his yellow and pink silks today, says huge improvement may be forthcoming. The latter is proven stateside and returns off a 4th to 2yo freak Newspaperofrecord in the GIII Miss Grillo at Belmont in September, and the fact she broke her maiden in her turf debut in Saratoga’s PG Johnson before that says she’s got a ton of talent too.

I’ll go it alone with the Brown duo, as they just look better than this group and give the impression they’re going places, while the rest look a cut below. If you do want some additional coverage, then #6 Makeme Dream (8-1) and #7 Ebullient (10-1) have a recency edge and ran well trying winners for the first time, suggesting they can improve today.

It may be simply coincidence, but the decision to move the Special out to 1 1/4 miles blew the field up to 14, and good luck picking a winner, as you could likely use upwards of eight of them and still won’t be guaranteed to have the winner. I’ll tackle the race from a flow perspective, since I think there’s a decent amount of speed, which may tilt it to the stalkers who will (conceivably) be in the right spot off the far turn. It looks like #2 RALLY CRY (9-2) got the perfect tightener out of the way last time, when a middling 4th in the GII Charles Town Classic, and he drew perfectly here, and figures to be placed just off the speed. Stablemate #13 YOU’RE TO BLAME (5-1) also got his comeback out of the way last time, winning an AOC at GP, and shows plenty of form last year good enough to be a player with a group like this. Getting back to Pimlico might help #8 TENFOLD (8-1), who was a slow 3yo but did run a close 3rd to Justify in the Preakness and makes his third start of the year, which could mean a career-best is coming, especially since he seemed to regress off his seasonal bow in the GII Oaklawn Handicap last time.

I don’t love his seven-race losing streak, but #1 WAR STORY (6-1) has a lot of class to him, also got his comeback out of the way last time, drew best, and Castellano is the top long-distance dirt jockey there is, so this may be now or never time. Don’t sleep on # 6 CORDMAKER (12-1), as he’s won two straight for ace Maryland trainer Jenkins, who is a stout 6-for-14 going sprint-to-route.

Another race with some speed, and a slew of gals who might not appreciate the testing 1 1/8 miles, so I want to see proven stretch form, which #8 POINT OF HONOR (5-2) has, and I thought she ran better than it looks when 4th in her acid test in the GII GP Oaks last time. I’m also using #6 ALWAYS SHOPPING (4-1), since she’s the only one in here with a win at the distance (she’s actually 2-for-2), and figures to be off the speed, as she was tracking pedestrian splits when 2nd early in last month’s GII Gazelle at Aqueduct.

I’m not sold on the overall quality of #7 BRILL (5-1), since she’s disappointed in four stakes tries, but she does make her third start of the year and will be pressing the speed from the outside, so if she kicks off the far turn and gets brave, I want to be there, at a decent price too. I’ll play against #4 Cookie Dough (3-1), who beat ‘Honor last time when 3rd, but it seems like she’s pulling a tough trip as the inside speed today, with Brill glued to her flank the entire way.