And Then the Jim Dandy and Haskell Happened... 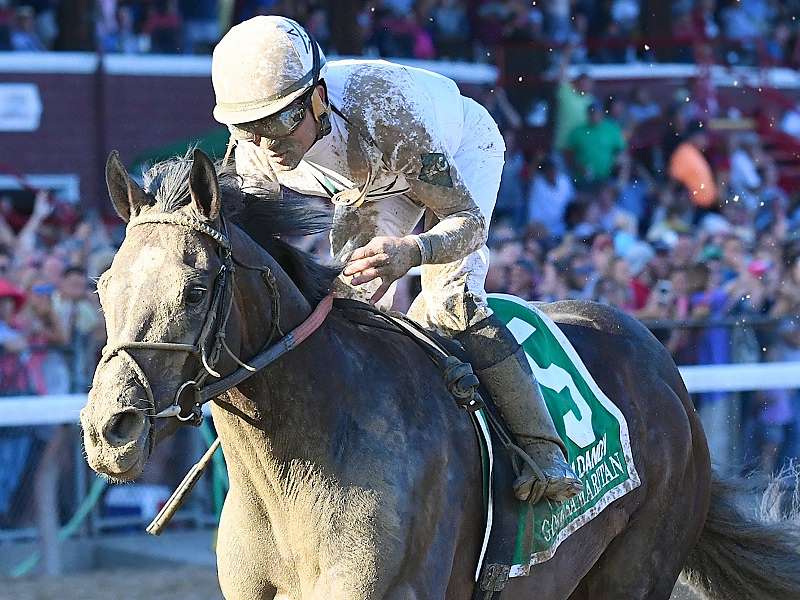 If you thought you had a good handle on the August 26 Travers at Saratoga heading into last weekend, you had to be scratching your heads after what you saw. After all, when the solid but unspectacular turf horse Good Samaritan laughed at the Kentucky Derby winner Always Dreaming and Preakness winner Cloud Computing in Saratoga’s GII Jim Dandy, in his dirt debut, no less, and the competent, but hardly overwhelming Girvin went from last-to-first to beat arguably the best field of 3yos assembled this year in Monmouth Park’s GI Haskell, well, you’re allowed to leave with a headache and wondering just what’s going to happen later this month. So, with that in mind, let’s try to decipher what we saw, and what it means going forward.

I was firmly against Always Dreaming heading into the Jim Dandy, and have been on record as saying he wouldn’t win another race, but when he was walking on a loose and lonely lead while going a half-mile in 48.53, I looked over at a friend and said “This horse is 2/5 from here.” And then he wasn’t. And then it looked like he’d finish last. And then he somehow finished 3rd, while never letting by perfect-trip Cloud Computing, who was last (more on him in a minute) and the maiden winner Pavel (5th), who looked like a winner for a brief moment off the far turn. So, on the face of it, Always Dreaming gets a point or two for his gameness, but when he was clear on a pedestrian pace, he’s also not supposed to cave in as badly as he did (for the record, he was beaten 5 ¼ lengths). And yes, both Good Samaritan and 2nd-place finisher Giuseppe the Great were last and second-to-last at the pace call, but it was still a very uninspiring effort for a horse that needed to show more after a complete no-show in the Preakness. And this is before noting his big wins in the Derby and Florida Derby were accomplished with dream trips.

As for Cloud Computing, there’s not much else to say other than he was horrific, while sitting a dream two-over harness kind of trip, yet coming up completely empty, even before they turned for home. And this is coming from a handicapper who thought he was a lock in the race. It’s not necessarily back to the drawing board for Chad Brown, but it’s also not really the type of effort he wanted to see with the Travers then just 28 days away. I give him a much better chance than Always Dreaming of rebounding, but I’ll also be casting a very weary eye about his prospects of doing it. Cloud Computing has come a long way in a very short period of time—from an unraced maiden in February to a Classic winner in May—so you’re allowed wonder if just maybe it’s catching up to him now.

Pavel is one interesting animal. Doug O’Neill shipped him across the country off one sprint win at Santa Anita, and he looked like a Lone F on paper prior to the Jim Dandy, yet there is was, sticking a nose in front in early stretch and looking like the real deal after settling nicely off the slow splits. The fact he did all of that off just one race speaks volumes of his talents, but it also might be a bit of an indictment on the Jim Dandy field, or especially of the two Classic winners he battled with. He has every right to come back in the Travers, and maybe even more forward, but I still think it may be a case of a bit too much, too soon, for a horse who has the looked of the prototypical late-developing 3yo.

Keeping with the backwards to forwards review of the Jim Dandy, Giuseppe the Great acquitted himself nicely in his two-turn debut and is another who deserves to move on to the Travers. Nick Zito has done a nice job stretching him out, and the fact he settled as nicely as he did, after being close to some hot splits sprinting, is a credit to the horse. But since I always have to play devil’s advocate, was his big run simply due to a pace collapse? Time will tell, but, if nothing else, you’ll get the right price to string along later this month.

I feel bad for leaving Good Samaritan to the end, as he was awesome mowing down this very accomplished field from the back, off a wide run without a lot of pace either, but you also have to wonder if this was more the exception than the rule? Don’t forget that this was his seventh lifetime start, and none of the first six came on the dirt, so it’s odd that Hall of Fame trainer Bill Mott took this long to try him if he knew he could handle the surface. With all that being said, if he runs back to this effort in the Travers, he wins. Period. The Jim Dandy run was that good. And with his closing style, you know he’ll love the 1 ¼ miles, which could be a bit dicey for a lot of his rivals. I just don’t know what to make of the win, especially since the big guns seemingly had all the best of it yet laid a big egg.

Girvin may have been the second-longest shot on the board in the Haskell, but his win wasn’t as shocking as Good Samaritan’s was, since he did win the GII Risen Star and GII Louisiana Derby this winter at Fair Grounds. However, he didn’t do a lot of running when 13th in the Derby and couldn’t even win the GIII Ohio Derby in his last. So, to see him close from last in a seven-horse loaded Haskell was surprising. The good news for his fans is that you’ll still probably get 8-1 or so in the Travers, the bad news is you better, because he’s that much more suspect going 1 ¼ miles and could bounce off such a lifetime best.

The rest of this field has a lot of questions to answer, should they forge on. McCraken appeared to move too early and got nailed on the line after opening a clear lead in midstretch, and it’s likely that a) he’ll be stretching his rubber band mighty thin going 1 ¼ miles, and b) he needs his beloved Churchill Downs to deliver a winning effort against the best of his generation. The fact that he easily went by the winner entering the far turn then got run down by him doesn’t bode well for his chances going longer either.

Practical Joke had a bit of trouble yet was a game 3rd, though no one has ever really thought he was a true grade I-type going two turns. And he had all the best of it in the Haskell too, since he was tracking the three leaders who were entertaining each other early. Oddly enough though, he may now be considered Brown’s best Travers hope after Cloud Computing’s total dud. I’ve always felt he could be a crack one-turn miler and will not play him in the Travers, especially since this is a barn that is always wildly overbet.

Going in, I thought this was Irish War Cry’s best chance to net a grade I as a 3yo, so to see him fold, with no real excuse, after tripping out nicely 3-wide just off an honest, but hardly hot, pace, says he’s more likely second tier. The fact that Graham Motion offered no excuses (to his classy credit) says as much. He’s another who deserves to be in the Travers, and just maybe one of these days he wakes up and decides to run a lifetime best, but I think it’s safe to say it’s unlikely to happen at this point.

Two races. Two surprises. And a lot left to figure out between now and the Travers. On the face of it, I’m much more likely to believe what I saw in the Jim Dandy than in the Haskell, and, as of now, and I can’t believe I would be typing this a week ago, Good Samaritan is going to take a hell of a lot of beating in the Mid-Summer Derby.