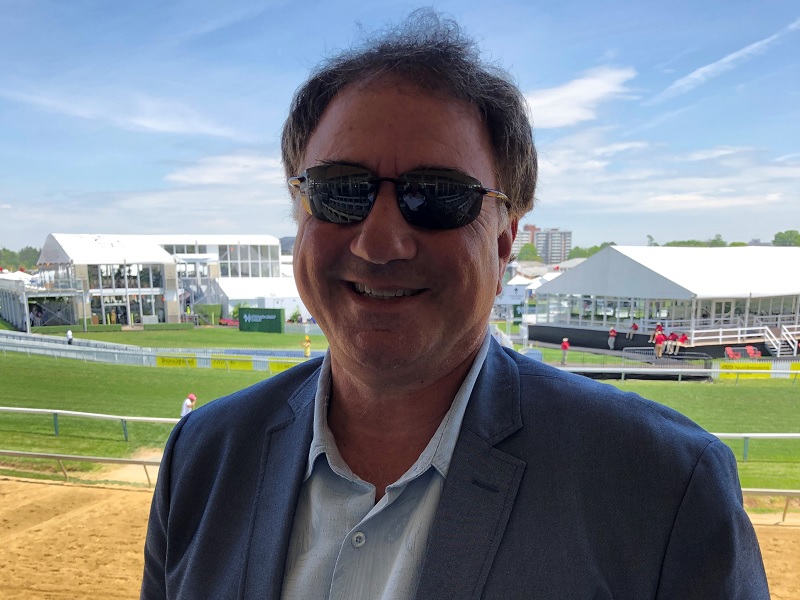 When you race under the name Imaginary Stables and have had the immediate success that John Guarnere has enjoyed as a Thoroughbred owner, it’s understandable that you need to pinch yourself every once in a while to make sure it’s real. The Philly-born snowbird started with a pair of claims in partnership in 2016 and has blossomed his stable to 48 active runners.

Guarnere and partners claimed Beaukati for $35,000 on February 3, 2016 off trainer Barclay Tagg; a day later, it was Quiet Force for $35,000 from trainer Mike Maker. And like that, a 2-horse stable was born. Five weeks later, they’d also debut on back-to-back cards at Gulfstream Park. Beautaki again was up first, winning for $30,000 as the 6-5 favorite under the care of Peter Walder. Just 24 hours later, Quiet Force stepped up to score at the $50,000 claiming level as the even-money favorite, also for Walder.

Guarnere can’t quite lay claim to that, though he made his business mark in the paper and printing business. He’s president and CEO of a paper Company, where he works with, among others, his wife of 38 years, Mary Ann. But since going into semi-retirement, Guarnere admitted, “I tried the fishing, golf, beach thing in Florida. I got bored and needed something more.”

That something more was turning a passion for playing the horses into owning them. Guarnere grew up in Philadelphia among 10 children. His father owned a few horses that raced at Keystone, and young John took an early interest in the track and betting the horses. As his businesses grew, so did his involvement in betting the races. Guarnere now is an Xpressbet Select member, a group of high-volume horseplayers.

“I’m kind of an over-doer with everything,” Guarnere said. “I reinvest my purses back into the game either with more horses or playing the horses. I love betting…but not a lot on my horses. I bet way less than my normal amount on my horses. I can’t handle the double-anxiety.

“I love Xpressbet; it has totally enhanced my betting experience, and being a Select player and watching the races in style has been an incredible experience.”

Guarnere said his process for evaluating potential claims includes consultation with other good handicappers that he’s become friends with over the years. Some include advice via algorithms and data. But mainly it’s a job interview, per se. “I ask more questions than any owner in the industry,” Guarnere said with a chuckle. “I use analytics to claim, but any horse we claim has to pass the trainers’ eye test. Everyone has a job to do. The trainers talk me off of some, reinforce me on others.”

Imaginary Stables currently has horses with trainers Jorge Navarro and Elizabeth Dobles. He’s diversified his stable from the early claims, now developing more young horses through the yearling and 2-year-old sales. “I have no desire to have 200 horses,” he said. “Just 50 good ones.”

Good ones? He’s had a few. Guarnere partnered to privately purchase Conquest Enforcer prior to him winning the Grade 2 Mathis Brothers Mile at Santa Anita late in 2016. He and Ron Paolucci joined forces to privately purchase Imperative a month later in January 2017. Imperative immediately won the Poseidon Stakes at Gulfstream and soon after the $1.5 million Charles Town Classic. The quick returns have continued. When we sat down with Guarnere last weekend at the Preakness, his barn was in the midst of quite a hot streak. “I’m a realist, this roll can’t continue,” he said. “I’ve won with 7 of my last 11, including 3 stakes in the past 2 weeks. Two of the stakes wins (May 11) came a few minutes apart, Breaking Bread at Monmouth (Serena’s Song Stakes at 5:27 pm) and Royal Squeeze at Gulfstream (Big Drama Stakes at 5:40 pm).”

Like his business, racing is a family affair for the Guarneres. The purple silks with green hearts of Imaginary Stables were designed by granddaughter Alliya, who was just 8 at the time. “She loves the races,” her proud grandfather says. And Mary Ann also shares in the excitement. “My wife screams louder at the races than me,” Guarnere said. “She was hooked. She’s at the barn feeding the horses treats and loving it.”

In-between races and handicapping the next winner, Guarnere has time to dream. Like most Thoroughbred racehorse owners, Guarnere said, “I’d love to get a Derby horse someday…or at least one into the prep races and see where it goes.”