War of Will Comes Through in Preakness 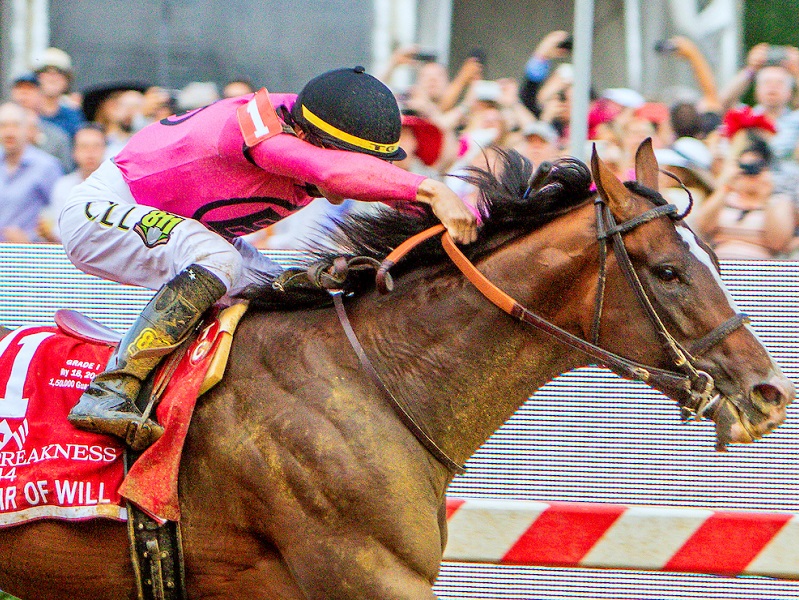 Keeping with tradition, when the horses came onto the track for the Preakness Stakes post parade, the folks on hand at Pimlico Race Course sang “Maryland, My Maryland.”

Also in keeping with tradition, after the 1 3/16-mile Preakness was declared official, the silks of the winning owner were painted on a weather vane. In this case, it meant the pink and black colors of Gary Barber, who races the victorious War of Will.

And I continued a Preakness tradition of my own. When the time came for me to try and forecast the winner, I began, as I almost always do, by tossing out any entrant who did not run in the Kentucky Derby. I generally take this approach because, according to history, it is very likely that the Preakness winner will be someone who started in the Kentucky Derby.

And keep in mind there is a possibility that Bernardini would not have won the 2006 Preakness if the overwhelming favorite, Barbaro, had not been pulled up soon after the start due to an injury. Barbaro had won the Kentucky Derby by a resounding 6 1/2 lengths. It is not at all a stretch to say that Barbaro might have also been victorious in the Preakness. If that had happened, then just three of the last 35 Preakness winners would have not run in the Kentucky Derby prior to this year.

In terms of picking someone to win the 2019 Preakness, I quickly whittled my list of possibilities all the way down to four from the 13 entrants by determining that I would not be selecting anyone who had not started in the Kentucky Derby at Churchill Downs on May 4. That left me with just Improbable, War of Will, Win Win Win or Bodexpress.

I cut my list down further to two by dismissing longshots Win Win Win and Bodexpress. So, for me, in short order, it came down to either Improbable or War of Will.

In the 1 1/4-mile Kentucky Derby, War of Will was impeded while full of run when involved in a traffic jam approaching the five-sixteenths pole. In spite of that trouble, War of Will still was “right there” until about the sixteenth pole. But then he weakened a bit and finished eighth. War of Will was elevated to seventh after the stewards disqualified Maximum Security from first and placed him 17th for causing interference to War of Will, Bodexpress and Long Range Toddy.

I felt that War of Will had every right to weaken a bit late in the Kentucky Derby not only because he had been impeded on the far turn, but also because it was his first race in six weeks and first meaningful race in 11 weeks.

War of Will undoubtedly did not get much out of the Louisiana Derby on March 23. The Kentucky-bred War Front colt abruptly took an awkward step shortly after leaving the gate. He ended up ninth and emerged from the race with a strained patellar ligament, according to his trainer, Mark Casse.

Not long after War of Will’s Louisiana Derby debacle, he underwent a thorough physical examination in Kentucky. War of Will passed the physical.

War of Will trained splendidly up to the Kentucky Derby. After his physical, he recorded three stellar workouts at Keeneland, then elicited rave reviews at Churchill for his four-furlong drill in :47.60 on April 27. Under the circumstances, Casse and his outstanding assistant, David Carroll, did a tremendous job to have War of Will as ready as he was for the Kentucky Derby. Yes, it turned out that War of Will finished eighth. But it was far from a disgrace for him to lose by 4 1/2 lengths despite being impeded nearing the five-sixteenths pole and despite not having had a meaningful race since winning the Grade II Risen Star Stakes on Feb. 16.

War of Will had to deal with the dreaded inside post position in the Kentucky Derby. I certainly was not thrilled to see him again get post 1 for the Preakness. But I took some solace in that at least there had not been a long drought in the Preakness from post 1. American Pharoah broke from post 1 when he won the 2015 Preakness en route to a Triple Crown sweep.

In this year’s Preakness, Warrior’s Charge showed the way through the early going while clicking off fractions of :22.50, :46.16 and 1:10.56. The maiden, Bodexpress, reared at the start and unseated Hall of Fame jockey John Velazquez. War of Will, once again ridden by Tyler Gaffalione, had an alert start and then lurked in fourth while racing along the inside rail through the early stages. This time, War of Will was not nearly as headstrong early as he had been in the Kentucky Derby.

As Casse watched War of Will again boxed in, the trainer understandably became concerned.

“About maybe the three-eighths pole, I started thinking, ‘Oh, dear, not again,’ because he was wanting to go somewhere and he had nowhere to go,” Casse said the next morning.

On the far turn in the Kentucky Derby, Gaffalione moved War of Will away from the inside rail shortly after passing the three-eighths pole. Hindsight is 20/20, but if Gaffalione had been more patient and continued racing next to the inner rail, he would have been able to capitalize on a huge hole that opened when Maximum Security veered out sharply approaching the five-sixteenths pole.

Look, I totally understand why Gaffalione did what he did on the far turn in the Kentucky Derby. War of Will was “all dressed up with nowhere to go,” as they say. The 24-year-old rider was eager to find somewhere for War of Will to go. But I also can’t help but wonder if perhaps a more veteran rider, someone from the past like a Chris McCarron, Gary Stevens or Eddie Delahoussaye, would have waited longer before leaving the rail. Calvin Borel? I have to think he never, ever would have left the rail.

In contrast to the Kentucky Derby, Gaffalione did remain next to the inside rail with War of Will all the way around the far turn. And this time they were able to come through a narrow hole between Warrior’s Charge and the rail that materialized at the top of the stretch.

War of Will unhesitatingly scooted on through to take the lead in the stretch just inside the three-sixteenths pole. He increased his advantage to a length at the eighth pole, then went on to prevail by 1 1/4 lengths at odds of 6-1.

Everfast, who sported the biggest odds in the race at 29-1, rallied from 11th to nose out 7-1 Owendale for second. Warrior’s Charge held on for fourth at 12-1. Laughing Fox, 25 lengths behind early, rallied to finish fifth, 3 3/4 lengths behind War of Will.

War of Will’s final time was 1:54.34. That was quite good, though the main track at Pimlico both Friday and Saturday admittedly seemed to be lightning fast. On Friday, the 3-year-old filly Covfefe completed six furlongs in a sizzling 1:07.70 to obliterate the track record of 1:09.00 set by Northern Wolf all the way back in 1990.

Still, even for allowing that the surface was faster than normal, it seems only fair that War of Will should get at least some credit for his 1:54.34 clocking vis-a-vis recent editions of the Preakness. Indeed, his final time of 1:54.34 was the second-fastest in the race since Louis Quatorze’s 1:53.40 in 1996. Curlin won the 2007 renewal in 1:53.46, the only faster Preakness than War of Will’s since Louis Quatorze. The great Secretariat holds the Preakness record of 1:53.00.

Below are the final times for the last 20 Preaknesses:

WAR OF WILL POSTS CAREER-BEST BEYER

Prior to last Saturday’s race, War of Will’s top Beyer Speed Figure had been a 94 when he won the Lecomte Stakes at Fair Grounds Race Course & Slots on Jan. 19. He was credited with a 90 for his Risen Star triumph on Feb 16. War of Will was assigned a career-best 99 Beyer for his Preakness performance.

Below are the Beyer Speed Figures for the Preakness winners going back to 1991:

On Wednesday (May 22) at Monmouth Park, Maximum Security had what was described as his first serious exercise since the May 4 Kentucky Derby, Daily Racing Form’s Jim Dunleavy reported. Jason Servis trains the colt.

“Monmouth clockers credited Maximum Security with a half-mile breeze in :53.80.”

Maximum Security’s only defeat in five career starts came when he was disqualified from first and placed 17th for causing interference to three opponents in the Kentucky Derby. Owners Gary and Mary West have filed a federal lawsuit in Kentucky in an attempt to overturn the disqualification.

Looking ahead, the Grade I Haskell Invitational at Monmouth on July 20, Grade I Travers Stakes at Saratoga on Aug. 24 and Grade I Pennsylvania Derby at Parx on Sept. 21 are under consideration for Maximum Security. The Pegasus Stakes at Monmouth on June 16 “has not been ruled out as a return race” before the Haskell, according to Dunleavy.

Servis said that, after the Kentucky Derby, he trained Maximum Security “for one day and then realized the New Year’s Day colt needed more time to recover from the race and that he backed off him for a week.”

Added Servis: “He got beat up, cut up in the Derby. Now, he’s starting to come back to himself.”

That certainly contradicts what Servis reportedly stated in a text message to Churchill Downs media the morning after the Kentucky Derby.