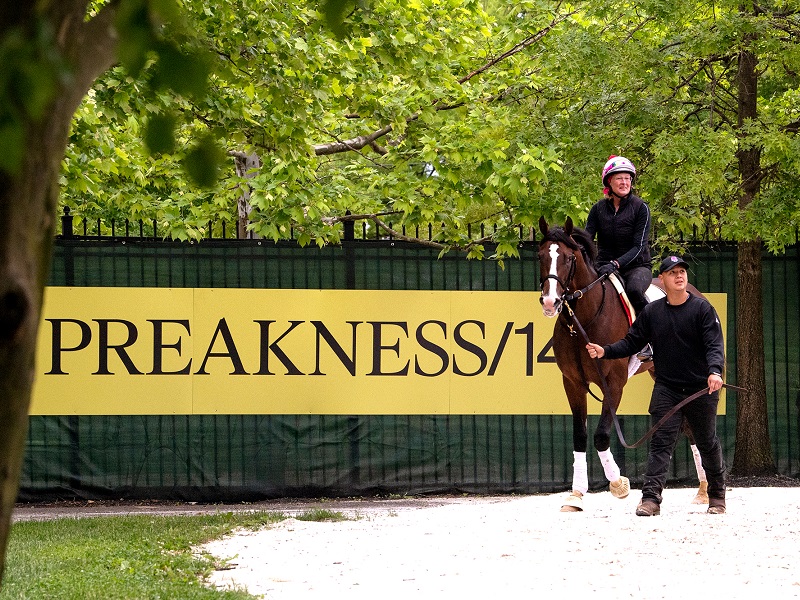 Redemption. That’s what winning the 144th Preakness meant to War of Will’s trainer Mark Casse. Forget that in a post-race interview Casse said he wouldn’t use that word to describe his feelings. It sure seemed that way to me. And not just redemption for the trainer. Young jockey Tyler Gaffalione and colt War of Will also experienced a revitalization in Baltimore.

Two weeks ago, for most of the journey around the Louisville layout, Preakness winner War of Will raced behind originally Derby winner Maximum Security. ‘Will saved ground throughout but didn’t seem comfortable and pulled against his rider for much of the journey. As the field completed the turn into the Derby stretch, hoping to give War of Will room to run, Gaffalione angled his mount outside and around leader Maximum Security. Unfortunately for everyone concerned, nearly simultaneously Maximum Security and jockey Luis Saez drifted several lanes out from the rail and directly into War of Will’s path. War of Will became the meat in a Kentucky Derby hoagie that also included Bodexpress and Long Range Toddy flanked by Country House. As we know, Maximum Security was disqualified from first and placed 17th--behind Long Range Toddy—the most severely affected in the incident, according to stewards. Country House, original runner-up and the one least bothered, was declared the Derby winner.

How much the incident actually affected War of Will’s performance became a point of much debate. Alarming photos emerged showing War of Will’s front legs extended between Maximum Security’s hind legs and it was evident that all in the field—equine and human—had escaped near disaster. Still, some believed that War of Will had not been severely compromised by the incident; that after Saez and Maximum Security had forced him to check he still had about a quarter of a mile to earn a better placing. Instead he offered little fight in the stretch and faded from third to eighth.

In the aftermath of the first Kentucky Derby on-track win disqualification in history and amid a flurry of discussion and video analysis usually reserved for serial killer manhunts, some critics pointed fingers at jockey Gaffalione and blamed him for adding to the seriousness of the incident by foolishly shifting War of Will into a tight spot. Casse immediately rushed to his rider’s defense. In a segment that aired during the At the Races with Steve Byk show May 7, the trainer vociferously defended both horse and rider. He referenced frame-by-frame video analysis that conclusively proved his rider blameless and his horse clearly hampered by the incident. Obviously, Casse believed his horse hadn’t had a fair shot in the Kentucky Derby. That was all he wanted in the Preakness.

Redemption. That’s what winning the 144th Preakness meant to War of Will’s trainer Mark Casse. No matter what he says. Earlier this year in New Orleans, before War of Will blew away foes like pollen in the wind, Casse went on record proclaiming him a special colt. War of Will provided proof of concept when he romped in the Lecomte by 4 lengths and then coasted home in the Risen Star by 2 ¼. Favored at 3-5 in the Louisiana Derby, a few strides out of the gate, War of Will suffered a hind-end injury and finished 9th out of 11.

The road to the Triple Crown is as demanding a journey as there is in sport. It’s a race against the calendar as much as it is against fellow sophomores. No pit stops. No tire changes. One tank of gas per customer. Derby is the first Saturday in May; Preakness two weeks later and Belmont just three weeks after that. No wiggle room. Coughs, sneezes, even hiccups not allowed.

Not long after the March 23 Louisiana Derby disappointment, Casse proclaimed War of Will fit and ready to continue the Louisville quest. The son of War Front already had enough points to qualify for a spot in the Kentucky Derby starting gate, so he didn’t need to race again. Casse aimed him at the Kentucky Derby with a series of works that included three at Keeneland: a half-mile in 48 4/5 April 6; 5-furlongs in 59 flat—best of 44 at the distance—seven days later; and another 5-furlong, muddy, best-of-nine bullet in 100 1/5. Derby week at Churchill Downs, 8 days later, Casse tightened the screws with an aggressive :47 3/5 best-of-79, half-mile breeze.

Clockers were impressed with War of Will’s training. He was eager. Willing. His breeding suggested distance would not be an issue. However, sharp handicappers wondered, would he have the stamina to go a mile and one-quarter? That was a fair question because even though the colt had trained well enough, he hadn’t had a meaningful race since galloping home easily in the Risen Star at a mile and one-sixteenth Feb. 16. On top of that War of Will drew the dreaded rail post position in the Kentucky Derby.

If winning the Kentucky Derby is equivalent to winning the equine lottery, then breaking from the rail and doing it must be like holding the only winning Powerball ticket. Usually, right out of the Derby gate, the entire field compresses toward the rail like an accordion. Inside horses that aren’t fast enough to outrun the tsunami or slow enough to trail behind get crushed like grapes in Napa. War of Will managed to be the exception and avoided it all. He found a cozy position behind the leaders and stayed there until off the final turn when angled out by Gaffalione.

Amazingly, for Preakness War of Will again drew the number 1 post position--a 260-to-1 shot parlay. Breaking from the rail in the Preakness isn’t normally as treacherous as it is in the Derby, but it’s still no picnic. In this case, however, both horse and jockey knew exactly how to handle things. After all, they’d just had a practice run in Kentucky; while eating mud, no less. This time, over a fast track, life riding the rail would be much easier. Plus, with the added experience, War of Will was more likely to relax and not ‘pull’ against his rider. Gaffalione, too, would be more confident in his mount’s ability to rate and wait until the perfect time to move.

And no matter how much one believed that the Kentucky Derby incident had affected War of Will’s finish, he was sure to be more fit in the Preakness. The mile and one-quarter was just what was needed to boost his wind to at least a pre-Louisiana Derby level.

Redemption. That’s what winning the 144th Preakness meant to War of Will’s trainer Mark Casse. After the race, in the winner’s circle the Indianapolis, IN native and member of the Canadian Hall of Fame breathed a sigh of relief and reiterated what he’s believed all along about War of Will. “It was so important to win it,” Casse said. “I just wanted him to get his chance to show everyone how good he is, because he is a super horse.”