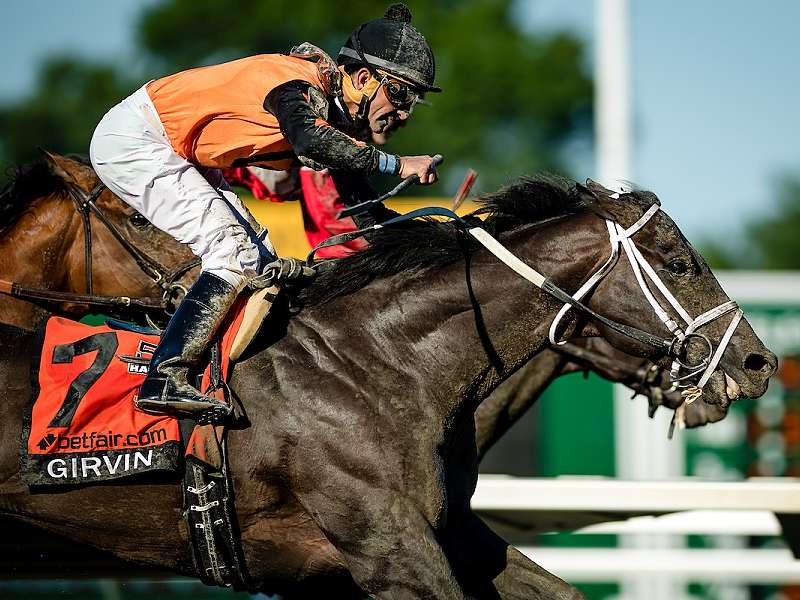 So, after hooves had thundered and dust had settled which of the above headliners had victoriously returned to Spa and Monmouth winner’s circles, respectively, for celebratory photo shoots?

None. They all had finished worse than first (although McCraken had made the Haskell photo finish about as close as possible).

According to the Urban Dictionary (the only dictionary I use), the definition of ‘redboarding’ is: “Boasting about a winning wager after the contest has been completed, but never speaking about the wager before the race was run. Withholding of good information before a horse race then boasting about the winner after the race is over and the bet is safely cashed.”

I didn’t cash a ticket on either race, unfortunately. And I didn’t withhold ‘good information’ either. In fact, if I had had ‘good information’ I might have cashed, been happy and not ended up here, days later, trying to recall the license plate digits of the truck that blindsided me.

No redboarding for me. This is a shade different. More like pinkboarding. Which, according to Johnny D’s dictionary, is defined as when a person admits they lost their ass on a race and want to review results in order to figure out what the hell happened.

Let’s take these soph hops one at a time. Wasn’t the Jim Dandy contested at Saratoga this year? And don’t Todd Pletcher and Chad Brown train Always Dreaming and Cloud Computing, respectively? And neither horse won? Wow! That’s strange. Pletcher and Brown take just about everything that’s not nailed down at the Spa, especially graded stakes races—or at least the ones Bob Baffert doesn’t want.

OK. I’ll grant that the 2017 Kentucky Derby was not one for the ages. Always Dreaming is a nice, fast horse that maximized early speed and fitness over a damp track in Louisville to lead contemporaries on a merry chase around the oval. He wasn’t nearly as fortunate on the quick turnaround in Baltimore when eighth beaten 14 lengths behind Cloud Computing in the Preakness. Cloud Computing, who skipped the Kentucky Derby, stalked a perfect Preakness trip and then pounced on Classic Empire for a head victory at double-digit odds! That’s right, he was 13.40-to-1 at Pimlico! Forgot he was that big a price, dintcha?

So, besides the obvious Pletcher/Brown-at-the-Spa angle, why were most horseplayers gaga over these two at even money and 6/5, respectively? Neither had raced since Preakness, so horseplayers couldn’t evaluate if either had developed or regressed in the intervening time. The public invested on press clippings and trainer reputations:

The rest of the Jim Dandy field included Pavel, a California invader with one start and one win, and Good Samaritan, an accomplished turf runner trying dirt for the first time. They were third and fourth favorites at 8.50 and 8.60-to-1, respectively. Guiseppe the Great with just one win in five starts had raced more like Guiseppe the Mediocre and rounded out wagering at 14.30.

Where was it written that either the Derby or Preakness winner had to succeed in the Jim Dandy? Nowhere, that’s where. And if you remembered that fact going into the race you might have been able to come away with Good Samaritan at a sweet price. As was noted by many beforehand, the Harlan’s Holiday colt that had won two of six turf starts, including the Grade 2 Summer at Woodbine, and had been a close third in the BC Juvenile Turf actually is bred to run better on dirt! Besides, Saturday was Hall of Fame trainer Bill Mott’s birthday and he always wins a race on his birthday…well, almost always. Guess now as part of my handicapping routine I’ve now got to access a list of trainer birthdays. Not!

Always Dreaming led Cloud Computing down the backside at a sensible pace and all appeared copacetic. At no point in the race was either colt forced to do anything extraordinary. Still, when push came to shove, neither had what was needed. Good Samaritan rallied from last and swept by foes like they had accessed a communal pit stop in mid-stretch. He exploded like a turf horse with a lightening turn of foot. And why not? Until the Jim Dandy that’s exactly what ‘Sam had been—a turf horse. He may never be one again. Most Thoroughbreds have a preference for either surface: dirt or turf. Few are as good on one as they are on the other. If ‘Sam prefers dirt, look out, because he’s a pretty good turf horse.

The next day, on the north New Jersey coastline, Irish War Cry was supposed to win the 50th running of the $1 million Haskell and close the book on a Monmouth Park fairy tale. Isabelle de Tomaso, daughter of Amory Haskell, founder of Monmouth Park, bred and owns the colt. Sentimentality aside, Irish War Cry possessed valid win credentials and started as second choice behind unbeaten, four-for-four Timeline (trained by Chad Brown). ‘Cry had been second in the Belmont Stakes last out and at times this season had looked both impressive and disappointing. The Haskell will be filed in the latter category. Irish War Cry had no excuse in the race. Neither did Practical Joke. Battle of Midway had the worst of the break and then rushed up inside to force the early pace, but that didn’t cost him the race. Timeline, also bothered at the start, was rank early and faded.

Like the Jim Dandy, the Haskell result corroborated the proverb ‘…the last shall be first.’ Haskell winner Girvin trailed early, moved up a bit down the backside, and then, on the far turn, moved toward the leaders in tandem while inside of McCraken. Girvin and jockey Robby Albarado were forced to pause momentarily behind horses while McCraken, outside, continued on and roared to the lead to open what appeared an insurmountable advantage. Girvin’s intermission actually may have contributed to victory by delaying his charge. Without losing momentum, Albarado swung the colt wide and they renewed a closing bid just outside of Practical Joke. The pair raced as a team toward McCraken with Girvin gaining a slight advantage over ‘Joke. At the moment of truth Girvin and McCraken finished nearly as one. A Polaroid was required to detect the former’s timely nose advantage.

That Girvin won the Haskell is not shocking. Winner of three of his first four races, including the Risen Star and Louisiana Derby, he was highly regarded along the Triple Crown trail. Unfortunately for his connections and young trainer Joe Sharp (Mr. Rosie Napravnik), Girvin developed a hoof issue and also experienced a very rough trip in the Kentucky Derby. He returned to racing in late June to miss winning the Ohio Derby by a mere nose to Irap. Entering the Haskell, minus the Kentucky Derby disaster, Girvin all told was less than one length away from being unbeaten in five starts.

What is so perplexing about the Haskell is the disappointing quartet of sophomores that failed to fire—Timeline, Irish War Cry, Battle of Midway and Practical Joke. I suppose, one could argue that Timeline was untested at this level, that Irish War Cry had been unreliable all season, that Battle of Midway had beaten just three others in the Affirmed last out and that Practical Joke’s best trip probably was around one turn. If you had accurately processed all that information beforehand then McCraken and Girvin were the overlooked colts, the ones out to prove that early season successes were not flukes. That line of thinking would have returned a nifty $154.80 exacta payoff for a deuce and transformed the tense Haskell photo finish into a joy ride.

Boy, this pinkboarding stuff is easy. I’m a lot smarter after the races than I am before them. Then again, aren’t we all?