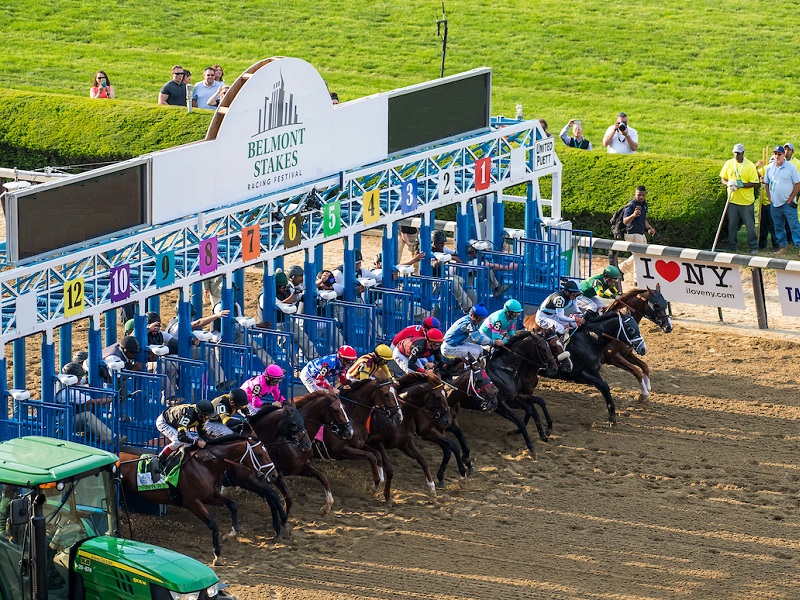 There’s no Triple Crown on the line Saturday in what appears to be a lackluster Belmont Stakes. However, don’t sleep on this race. There’s a chance we could witness a breakout performance from a developing star. Tacitus has many positives going for him both in the Belmont Stakes and for the future. He could emerge as a top colt, not only in the 3-year-old division, but as an older horse, too. Below is one man’s opinion of the runners in the 2019 Belmont Stakes, including a suggested wagering strategy.

He’s got speed and the rail, so he could set the pace in the Belmont Stakes…at least for a while. In his last start Joevia won the Long Branch at Monmouth, but that’s a ‘long branch’ from winning the Belmont Stakes. He faded late in the Wood Memorial behind Tacitus and Tax. That’s more in line with what we expect in here.

This son of Take Charge Indy finished second in the Preakness Stakes behind War of Will. He closed from far back that afternoon, which is his style. He also finished second in the Grade 2 Holy Bull at Gulfstream. Unfortunately, between the ‘Bull Feb. 2 and Preakness May 18 he ran three other times and never was within 10-lengths of the winners. That’s Everfast. Hit and miss. Think Belmont will be a ‘miss.’

He’s a Japanese-bred colt ridden by a French-bred jockey. Now, there’s a combo you don’t see every day. Master Fencer ran well in the Kentucky Derby to be seventh, originally, beaten only four lengths—that’s one position better than Preakness winner and Belmont morning-line second choice War of Will! However, before that Master Fencer was not much in his native land. Nearly 57-1 starting Derby odds reflect that. His next to last workout had connections holding their collective breath as he stumbled suddenly near the finish. Subsequent examinations have found no injury, so Master Fencer will race in the Belmont. He can be located near the back of the pack early and probably late, too.

At 35-1 in the Kentucky Derby, Tax originally finished 15th with no real excuse. Just before Belmont week, based on the gelding’s training, there was reservation in the Tax camp about running in the race. Finally, connections decided to enter and see if their $50,000 claim can hit the jackpot! Since claimed he’s won the Grade 3 Withers and been second in the Grade 2 Wood and third in the Grade 2 Remsen. He’s usually just off the early pace so he’ll be around for a while after Joevia gives up. Bottom level exotics would be the best guess for this guy.

He turned heads when a close second in the Xpressbet Fountain of Youth at Gulfstream in March. Unfortunately, since then he’s finished no closer than within seven and one-half lengths of winners in the Xpressbet Florida Derby and Preakness Stakes. He has no speed and requires a hot early pace for his best. Pace in this race ought to be ‘honest’ but not torrid. Blinkers that went on for Preakness come off for the Belmont. If he fires his best shot he’s got a chance to hit the board, so he can’t be totally dismissed.

This son of Hard Spun is one of two Todd Pletcher-trained runners in the race (also #8 Intrepid Heart). That’s notable because Pletcher has a knack for saddling horses that outrun their odds in the Belmont Stakes. Since 2006, Pletcher’s Belmont record is 23: 3-5-4. Spinoff was well-beaten in the Kentucky Derby and a sloppy track is the apparent culprit. Before that he had never been worse than third in four previous starts. A ‘fast’ track is expected Saturday. He has some pace that ought to put him in contention from the start. With respect to Pletcher’s record in this race Spinoff (and #8 Intrepid Heart) should at least appear in lower legs of exotics.

He’s by Awesome Again and should appreciate the mile and one-half Belmont distance. He finished second in the Peter Pan May 11, so he’s one of three in here that have raced at Belmont before (#8 Intrepid Heart, #10 Tacitus). He’s been a real longshot in his last four races-- all Grade 3 or Grade 2 Stakes (14-1, 19-1, 46-1, 33-1)--and has started at single-digit odds just twice in a nine-race career--the Display, which he won at 4-1 and his first-out maiden at two (7-1). So, what’s he doing in here? Breeding, distance and current form are the answers. He hasn’t shown much speed before, so he’ll need to close, but he shouldn’t be as far back as some of the others. That helps his case. As presented, he’s got some positives and should be big price. Worth using in exotics.

He’s by Tapit and that’s enough right there to keep him in the mix. According to info in Xpressbet’s Free Belmont Stakes Wagering Guide: In the Belmont Stakes since 2014, Tapit has sired three winners, a second and a third. This year he’s represented by three sons: #5 Bourbon War, #8 Intrepid Heart & #10 Tacitus. Last out Intrepid Heart finished third behind Peter Pan runner-up #7 Sir Winston. However, Intrepid Heart, who was the Peter Pan favorite, stumbled at the start. He’s got enough pace to be close early and that’s a positive. Blinkers go ‘on’ for this at the direction of trainer Todd Pletcher who’s been very successful in this race (see #6 Spinoff). Intrepid Heart is lightly-raced, with two wins in three starts, so upside is there. Consider him an important inclusion in Belmont wagering endeavors.

Probably the most notable pre-Belmont news is that War of Will did not draw the #1 post position. That’s where he was for the Kentucky Derby and Preakness. Now, he begins one slot from the far outside. While this colt enters off a troubled eighth-place Derby finish (moved up to seventh) and a rail-skimming Preakness triumph, there are reasons to question him in the Belmont. His sire-side breeding suggests the Belmont distance may be a bit more than he wants. However, his dam is by Sadler’s Wells and that’s pure distance. War of Will ‘pulls’ in his races. He fought against jockey Tyler Gaffalione throughout in the Derby and then was better behaved in the Preakness. He must completely relax in the Belmont and that might not happen. He’s got enough speed to be in the mix early and that’s a good thing. Trouble might surface if jockey Gaffalione is forced to ‘ask’ War of Will out of the gate to get good position into the first turn. Once ‘asked,’ the colt may not turn completely ‘off.’ He’ll need all of his energy to last the entire mile and one-half. War of Will did not work out since his Preakness triumph. That’s three weeks without a breeze. Yes, he’s the only Belmont entrant that ran in both the Derby and Preakness, so he should be fit, if not tired. Do you want to wager at a short price on a tired horse going a mile and one-half over Big Sandy? No thanks. While none of these handicapping angles are locks pointing toward a poor performance from War of Will, they’re not encouraging either. They are enough, however, to encourage us to pause on this morning-line second choice even though he’s a very good colt.

Everything about this colt feels right: He’s by Tapit—a sterling Belmont sire (see #8 Intrepid Heart) and out of Close Hatches—Champion Older Female in 2014; trained by Hall-of-Famer Bill Mott; owned by Juddmonte Farms--one of the world’s top racing and breeding operations; a multiple Grade 2 stakes winner; clearly training better than any other Belmont Stakes horse-- including a bullet five-eighths in 1:00 2/5; has a mid-race closing style; is ridden by two-time Eclipse Award winner and Belmont Stakes-winning jockey Jose Ortiz (Tapwrit 2017); comes off a fourth-place finish (moved up to third) in the Kentucky Derby—best of anyone in the field. These positives add up to a very short price on Tacitus in the Belmont Stakes. That’s good and bad news: Belmont favorites bat 42% all-time but are just 2 for the last 13! If Tacitus’ price should plunge precipitously, note that odds-on Belmont choices are just 2 for the last 10. Based on numerous positives, Tacitus clearly is the one to beat in the Belmont Stakes.

Clearly One to Beat: #10 Tacitus

Reasons to Doubt: #9 War of Will