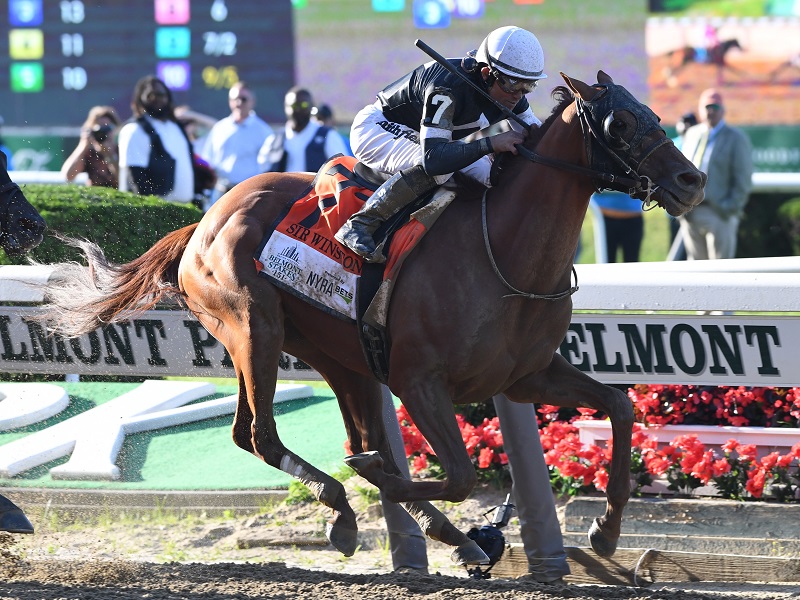 Saturday’s Belmont Stakes Day card almost had to deliver on its promise of starpower. Nearly every division of older horses was represented at the Grade 1 level, and the stars came out to play. And while it proved a treat to watch, betting it was another matter. Races that looked like $3 or $30 prospects on paper pretty much proved as such. But with $101 million bet, most ever on a non-Triple Crown-at-stake day at Belmont, the wagering public either didn’t care or didn’t believe it. They went all in on races that played out with short prices or head-scratchers, the toughest environment in which to find success at the windows. Rushing Fall started it out with the Just A Game and paid just $3.40 as a lone-speed situation already in the camp of the race’s best horse. She led a tap-in putt exacta at $5.60 to Beau Recall. A veritable 2-horse race in the Ogden Phipps was next as lone-speed Come Dancing failed to cash in her key chip at 4-5 when the classy and simply much-better Midnight Bisou rolled by her at $5.40. The exacta was worth just $5. Business didn’t pick up much in the Jaipur as 2-5 shot World of Trouble was never in any trouble en route to a $2.80 wire job. The exacta to Om returned just $7.40. The Acorn was fourth in line and on paper this one seemed to be the chance to break out a price horse. Favorite Guarana came off a sloppy-track Keeneland maiden win in which all 7 returnees from the race had lost, including some in maiden claiming races and others off-Broadway in Ohio. Second choice, Kentucky Oaks upsetter Serengeti Empress, had all-or-nothing form in 8 previous starts. Despite all that, the public had them pegged 1-2 and they ran to order at 9-5 and 3-1, returning $5.80 to win and $11.70 on the exacta. Through 4 Grade 1s, you couldn’t muster a 2-1 shot or a $12 exacta for a buck. If you were gasping for air on price patrol, you weren’t alone. The back 4, if you will, turned the corner but in a very abrupt way. After being lulled to sleep with chalk, the Woody Stephens went bonkers with a superfecta dotting the tote at 18-1, 17-1, 15-1 and 31-1. If you were hip to the Hog Creek Hustle, congratulations. The $39.80 win and $328 exacta could have salvaged an account balance. The super returned $3,445 for a dime and could have went all-Clint Eastwood on you and made your day. After being hit with a hammer about a speed and rail bias from anyone on the simulcast, national TV or Twitter feed, the Woody Stephens top trio rallied from 10th, 11th and 8th…and wide at that. A silver lining to the Woody Stephens was that my confidence in Honest Mischief was sky high off his Keeneland maiden breaker. In fact, he was my best bet on the card. But the public crushed him to 2-1, far too low to accept in this 11-horse field, and he became a pass. He wound up sixth and I wound up fortunate to have stayed on the bench. The only oasis among the lineup of Grade 1s came in the highly anticipated Met Mile. Perhaps the race of the year, it was sensational sprinter Mitole who offered a more-than-fair $9 return that horseplayers could sink their balances into. Of course, you had to like him to beat $14 million earner Thunder Snow, Belmont beast Firenze Fire and horrible-tripped 8-5 favorite McKinzie to do so. But the Met Mile at least delivered a solid win price on a solid horse. The exacta came back just $11.70 with hard-luck McKinzie in the runner-up. The tri was about $55 for a buck. You weren’t breaking the bank here, especially if you were chasing after a day of difficult price connections. Any respite from chalk was short-lived as Bricks and Mortar delivered another brickhouse performance in the Manhattan. America’s leading grass performer scored at $3.30 and led an all-Chad Brown exacta ($9.60) and trifecta ($46 for $1). For those of us who thought it might be the ‘other-Chad’ at 8-1 on either Robert Bruce or my tab Raging Bull, this wasn’t to be our day. And finally, the main event in the Belmont Stakes proved to be as much of a cluster at the wire as it was on the tote. Not a single horse was above 20-1 for most of the betting, and only Joevia topped that mark at 21-1 in the final odds. Favorite Tacitus settled for second at 9-5 as Sir Winston rallied as the fifth wagering choice and one of 4 runners who were either 10-1 or 11-1 prices. The top 9 (of 10) finishers in the Belmont Stakes were within 7 lengths at the wire. Sir Winston was about as bettable as any, I suppose, and congrats if you had him at $22.40 or the exacta at $48. Those potentially could get you out of trouble on the day and into the black if weighted properly and if the bankroll remained to back up a correct opinion. The tris and supers using speed horses Joevia and Tax ballooned. I absolutely enjoyed watching Saturday’s races from start to finish. But betting them was an exercise that looked unattractive on paper and turned out to be an equally difficult task. But like I always say in such times, “That’s why they invented ‘the next race.’