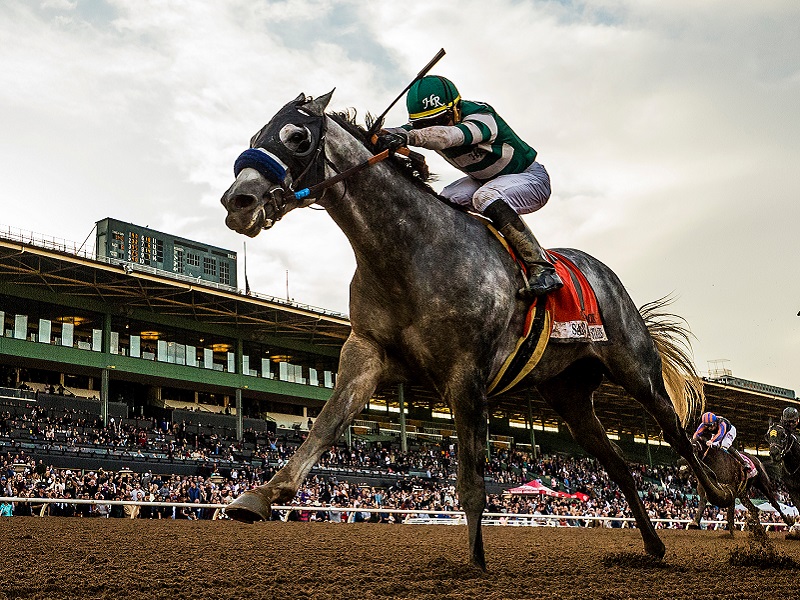 There’s no such thing as a Triple Crown hangover in horse racing as we get right back at it this Saturday with five graded stakes races at Churchill Downs, headlined by the G2 Stephen Foster Handicap, starring Yoshida, Gift Box, Seeking the Soul, Tom’s d’Etat and others.

Xpressbet customers who bet Churchill Downs on Saturday are advised to check out the All-Stakes Pick 4 (Races 6 – 9) that includes the ‘Foster, Fleur de Lis, Wise Dan and Regret.  Hit it and you’ll Split 1 Million XB Rewards Points.  Please note, you do have to register for that promotion.  But hey, registration is free and takes just a click or two.

We’re also offering the same 1 Million Point Pick 4 Split promotion Saturday night at Woodbine Mohawk Park.  I won’t try to handicap that card, but our Harness Racing Guru, Al Cimaglia, will you have covered for that.  Check out our News Section on Saturday for his picks.

As for Churchill on Saturday, here’s a horse I’m going to be betting in each of the five stakes races on the card, as well as my recommended All-Stakes Pick 4 ticket.

MR. MONEY was 7/1 when he upset Instagrand in the G3 Pat Day Mile on the Kentucky Derby understand.  He won’t be near that price this time around but that was a major effort to build on, especially considering the Pay Day runner-up, Hog Creek Hustle, went on to win the G1 Woody Stephens at Belmont in his next start.  Nolo Contesto is interesting in that he has raced against the likes of Roadster, Omaha Beach and Game Winner this year and has held his own.  He even beat Omaha Beach in a maiden race in January.  Signalman reportedly bled in the Preakness and we should expect a solid effort from him.

In a full field on the turf, I’m as worried about finding a horse that projects to have a good trip as much as anything else.  Horses drawn outside and deep closers are running against it in my view.  So I’m going to pass on Admission Office, March to the Arch and some others.  I’ll assume Siem Riep and Noble Commander send, which would open up a great stalking trip for GET WESTERN, who ran a really nice race last out for Charles Lopresti.  And you know he’d love to win this race, named after the beloved Wise Dan, whom Lopresti trained to 23 victories and Horse of the Year honors in 2012 and 2013.  I’m curious to see how El Picaro performs, but willing to pass on betting him in his first race since November and his first race outside of Chile.

Look, if Elate comes out and wins this thing, nobody will be surprised.  She’s an impressive mare, a two-time Grade 1 winner, and her Saratoga battles against Abel Tasman are two of the most memorable performances in the Distaff division this decade.  Unfortunately, she hasn’t shown me as much this year.  The Speed Figures are still solid (98 and 96) but she just hasn’t shown that killer instinct down the stretch.  That’s why I’m going with BLUE PRIZE at a better price.  She was moving like a winner in my eyes in the G1 La Troienne last out before she hit a wall.  First race in six months will do that to you.  I’ll trust that she’s a little sharper this time around.

Talk about a phenomenal field. Yoshida, Seeking the Soul, Tom’s d’Etat, Gift Box…these are all superior performers and this has the makings of a great race.  I’ve chased Yoshida far too many times to throw my support into that corner, but I don’t blame anyone who bets him.  Seeking the Soul was not sharp in his first race back from Dubai, but at least he has that under his belt.  He doesn’t strike me as a horse that is capable of winning something like this right now, though.  Tom’s d’Etar is a favorite of mine but not sure he’ll work out a great trip from the 9-hole.  The inclusion of GIFT BOX really intrigues me.  He just ran 1 1/4-miles at Santa Anita on May 27 and the fact that he’s back here tells me John Sadler things this horse is doing really well.  He’s already defeated McKinzie this year and drew midpack, which seems perfect for him.  I’d like to see him stalk the early pace a little more than he has in recent starts, but he should be ready to roll off that last start.

I’m not often impressed by the maiden-breaking performances of horses that need five tries to find the winner’s circle, but VARENKA couldn’t have been more impressive in her seasonal debut at Belmont last month.  And, in fairness to her, she spent 2018 chasing fillies like Newspaperofrecord and Dogtag, so it’s not like she was in against inferior competition.  In that Belmont race, she stayed on the rail, saved ground and just exploded down the stretch to an effortless ‘under wraps’ victory.  A similar run would find her making it 2-for-2 this year.