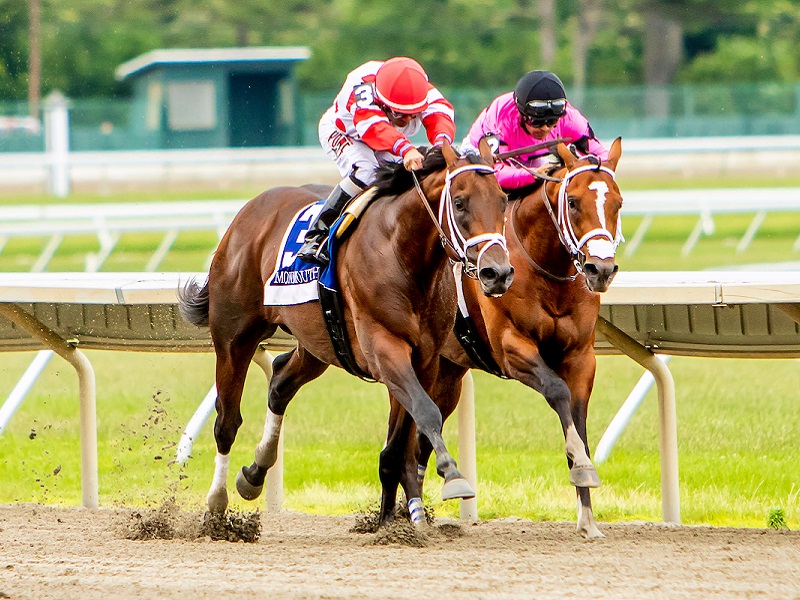 King for a Day ruled the day when he managed to topple overwhelming 1-20 favorite Maximum Security in last Sunday’s 1 1/16-mile Pegasus Stakes at Monmouth Park.

When I was a guest with Joe Withee and Rob Rao last Sunday morning on the Win Place Show, a radio program heard on Seattle’s KJR-AM, I issued a warning to the listening audience. I said to watch out for King for a Day in the Pegasus.

I had heard through the grapevine last fall that trainer Todd Pletcher was very high on King for a Day. That was just before the Kentucky-bred Uncle Mo colt ran in the Grade II Kentucky Jockey Club Stakes at Churchill Downs on Nov. 24. A reliable source told me back then that Pletcher considered King for a Day to be one of his best 2-year-old colts, maybe even his best chance for the Kentucky Derby.

King for a Day finished fourth in the 1 1/16-mile Kentucky Jockey Club. He lost by two lengths at odds of 9-2. He then went on the shelf. He didn’t race again until May 18.

On May 18, King for a Day came off the bench and won the 1 1/16-mile Sir Barton Stakes by 2 1/2 lengths as a 2-5 favorite. He employed the Sir Barton as a useful springboard to last Sunday’s Pegasus.

Trained by Jason Servis, Maximum Security went into the Pegasus having crossed the finish line first in all five of his career starts. The colt’s only defeat had come at the hands of the stewards in a controversial renewal of the Grade I Kentucky Derby at Churchill Downs on May 4. After Maximum Security prevailed by 1 3/4 lengths in the 1 1/4-mile classic, he was disqualified and placed 17th for committing a foul when he veered out sharply nearing the five-sixteenths marker to cause interference to War of Will, Bodexpress and Long Range Toddy.

Prior to the Run for the Roses, Maximum Security had reeled off four straight victories at Gulfstream Park by a combined 38 lengths from Dec. 20 to March 30. When Maximum Security won the Grade I Xpressbet Florida Derby by 3 1/2 lengths at 1 1/8 miles on March 30, it served notice that he might prove a tough customer next time out in the Kentucky Derby.

For a moment in upper stretch, it appeared that Maximum Security was going to edge away from King for a Day. But King for a Day just would not go away.

When asked in the final furlong, King for a Day flexed his muscles to get the job done by one length at 5-1 in the wagering. Maximum Security had to settle for second while finishing well clear of the others in the field of six. Direct Order, a 33-1 longshot, ended up third, nearly six lengths behind Maximum Security.

Ridden by Joe Bravo, King for a Day clocked in at 1:42.59. He was credited with a career-best 102 Beyer Speed Figure. His previous top Beyer was the 85 he recorded in the Sir Barton.

Maximum Security emerged from the Pegasus none the worse for wear.

“He scoped good and cleaned up his feed tub last night,” Servis said to the BloodHorse’s Bob Ehalt the day after the race. “The [stumble at the] break definitely compromised us. I saw that he got a 100 Beyer Speed Figure, which means he has triple-digit Beyers in his last four races, which is pretty good for a 3-year-old.”

Monmouth’s Grade I Haskell Invitational on July 20 is next up for Maximum Security.

MUCHO GUSTO COULD HAVE BIG SAY IN HASKELL

In light of Mucho Gusto’s sparkling victory in last Sunday’s Grade III Affirmed Stakes at Santa Anita, he might prove a very tough customer in the 1 1/8-mile Haskell, which is likely to be his next race, according to Hall of Fame trainer Bob Baffert.

With Joe Talamo in the saddle, Mucho Gusto rated beautifully when fourth early in the Affirmed while racing wide. The Kentucky-bred colt moved up readily to take command entering the stretch and went on to win by 2 1/4 lengths at 9-5.

Even-money favorite Roadster, also conditioned by Baffert, finished second among the six Affirmed starters. Earlier this year, Roadster won the Grade I Santa Anita Derby. He then finished 16th and was moved up to 15th through Maximum Security’s disqualification in the Kentucky Derby.

Despite all that Mucho Gusto already has accomplished, I think he might still have plenty of upside inasmuch as his sire is Mucho Macho Man. Though Mucho Macho Man was good enough at 3 to finish third in the Kentucky Derby, he did his best running at 4 and 5. In his final start at 5, Mucho Macho Man won the Grade I Breeders’ Cup Classic at 1 1/4 miles.

Uncle Mo was voted a 2010 Eclipse Award as champion 2-year-old male. He not only sired Pegasus winner King for a Day, he also was represented last Sunday by Miss Mo Mentum, who captured Woodbine’s Grade III Trillium Stakes at 7-1. She had finished seventh as the 5-2 favorite in the 2018 Trillium.

By the way, keep an eye out for a 2-year-old son of Uncle Mo by the name of Mo Hawk. He seems to be on the verge of making his debut. It is my understanding this could be a special colt. He currently resides in the Baffert barn at Santa Anita.

Baffert trained Mo Hawk’s dam, Princess Arabella, who was undefeated and untested in three lifetime starts. Princess Arabella won twice at Santa Anita by the same margin, 3 1/2 lengths, then annihilated her opponents when she took the 2012 Sunland Park Oaks by eight lengths.

While the favorite failed to win both the Pegasus and Affirmed last Sunday, two 3-year-olds who did succeed as the chalk in stakes races were Mr. Money at Churchill Downs and Baja Sur at Emerald Downs.

After finishing fifth in the Grade II Louisiana Derby on March 23, Mr. Money has put together back-to-back impressive wins at Churchill.

Brett Calhoun trains Mr. Money, who has lots of Breeders’ Cup blood flowing through his veins, so to speak. Mr. Money is a son of Goldencents and the Tiznow mare Plenty O’Toole. Goldencents won the Grade I BC Dirt Mile in 2013 and 2014. Tiznow won the BC Classic in 2000 and 2001.

A race worth a lot of money probably is next for Mr. Money, according to Calhoun. That race is the $500,000 Indiana Derby, a Grade III event at Indiana Grand on July 13.

Baja Sur was backed down to 1-5 favoritism in the 6 1/2-furlong Coca-Cola Stakes at Emerald. Off alertly, he set the pace and appeared on his way to another victory by a big margin when he opened a three-length advantage at the eighth pole. He had won his previous three career starts by 5 1/4, 10 1/2 and five lengths.

But this time Baja Sur’s margin of victory was “only” 1 3/4 lengths, though it should be noted that he was far from all out.

Franklin Ceballos rode Baja Sur. The final time was 1:15.60. Blaine Wright trains the Washington-bred Smiling Tiger gelding, who paid $2.60 for each $2 win ticket. That broke the record for the smallest $2 win payoff in the history of the race. The previous smallest $2 win payoff had been $3.20 when Name for Norm was victorious in the 1997 renewal.

This Saturday’s Grade III, $500,000 Ohio Derby at Thistledown has drawn a field of seven 3-year-olds.

I felt that Global Campaign, trained by Stan Hough, was going to be tough to beat at 3-1 on the morning line. But Daily Racing Form’s Nicole Russo reported that Global Campaign “will be scratched due to a nagging foot problem, Thistledown director of racing Patrick Ellsworth confirmed Wednesday.”

Owendale, conditioned by Brad Cox, is the 9-5 favorite on the Ohio Derby morning line. He made an electrifying move on the far turn while on his way to a 1 3/4-length victory in Keeneland’s Grade III Lexington Stakes at 1 1/16 miles on April 13. He then finished third in the Preakness. But even though Owendale did not win the Preakness, keep in mind he actually did record the best Thoro-Graph figure of everyone who ran in that race.

Kentucky Derby winner Country House is not going to race again this year, while Belmont Stakes victor Sir Winston has been sidelined by an ankle injury.

Hall of Fame trainer Bill Mott announced last Saturday that he was not satisfied with how Country House had been training and will turn the Kentucky-bred Lookin At Lucky colt out for 60 days, if not longer, Daily Racing Form’s Marty McGee reported.

Three days after the Run for the Roses, Country House exhibited signs that all was not well with him in what now is being characterized as a minor illness. He spent a week to undergo a thorough checkup at the Rood & Riddle Equine Hospital in Lexington, Ky. After getting cleared at the clinic, Country House resumed training. But now the plug has been pulled on his 2019 campaign.

“I think we just need to give him a rest,” Mott said.

At 65-1, Country House registered the second-biggest upset in the history of the Kentucky Derby, topped only by Donerail’s 91-1 shocker in 1913.

According to trainer Mark Casse, Sir Winston “is dealing with an injury to his left front ankle and will be out of training for a little while,” the DRF’s David Grening reported.

“I’m not going to rush him,” Casse said of the Kentucky-bred Awesome Again colt. “It will keep us out of the Travers for sure. My plan is to have him ready for the fall with the Pegasus in mind.”

Casse also gave an update on Preakness winner War of Will, who finished ninth in the Belmont. Casse told Grening that the Kentucky-bred War Front colt “could run in the Jim Dandy on July 27 or simply train up to the Travers on Aug. 24.”

I think it’s safe to say that almost everyone would agree that Justify gave the best performance in each of the three races.

But there was no such clarity this year regarding those three races. Far from it. Interestingly, according to Thoro-Graph, the horse who finished first in all three of this year’s Triple Crown events did not run the best race.

As I have stated many times, I think Beyer Speed Figures do have value, which is why I often refer to them. But in my opinion, the figures calculated by Thoro-Graph are vastly superior to the Beyers.

Regarding Thoro-Graph, the lower the number the faster the race, which is the opposite of the Beyers.

In the case of the Thoro-Graph Figures, a horse who finishes second, or even lower, can get a better figure than the winner. This, I believe, is a much more realistic evaluation of a horse’s performance.

Thoro-Graph takes many more factors into account than the Beyers. According to Thoro-Graph, “each number on a sheet represents a performance rating arrived at by using time of the race, beaten lengths, ground lost or saved on the turns, weight carried, and any effects wind conditions had on the time of the race.”

As far as Thoro-Graph is concerned, the best figure (and thus the best performance) in each of the three Triple Crown races this year was posted by Game Winner in the Kentucky Derby, Owendale in the Preakness and Tacitus in the Belmont.

Game Winner finished sixth in the Kentucky Derby. As mentioned earlier, Owendale ran third in the Preakness. Tacitus (who traveled 65 feet farther than the victorious Sir Winston, according to Trakus) finished second in the Belmont.

Let’s take a look at the various Thoro-Graph and Beyer figures for the three Triple Crown events this year.

Below are the 10 best Thoro-Graph figures in this year’s Kentucky Derby, followed by the 10 best Beyers:

Below are the 10 best Thoro-Graph figures in this year’s Preakness, followed by the best 10 Beyers:

Below are the 10 Thoro-Graph figures in this year’s Belmont, followed by the 10 Beyers: