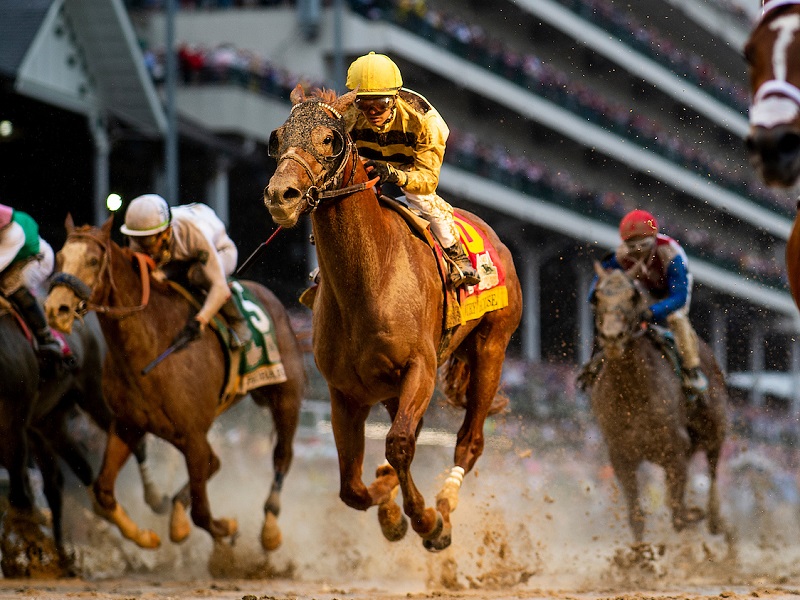 Both 2019 Kentucky Derby winners—Country House and Maximum Security--and the 151st Belmont Stakes victor—Sir Winston--hit rough patches this week. Country House, who originally finished second in the Derby but was elevated to first via disqualification, has been shelved for the rest of the year. Sidelined by an illness following the Derby, he hasn’t raced since and won’t for a while. The son of Lookin At Lucky had just returned to serious training when conditioner Bill Mott decided to pull the plug on the remainder of a 2019 campaign. No detailed explanation was given except that, according to Mott, the colt required a vacation. And not just your usual summer, two-week, pack-the-kids-in-the-car-and-head-for-the-beach kind. ‘House will get at least six months of R &R.

Sunday, Maximum Security returned from a post-Derby vacation and competed at Monmouth Park. He was a 1-20 favorite against five foes and figured an absolute cinch to win. Then something funny happened: the gates opened, and Maximum Security stumbled to his knees. He quickly recovered, however, and by the first turn had assumed his usual position in front of the field. He was dogged outside by King for a Day and, early on the far turn when jockey Luis Saez began to scrub on the favorite like a washerwoman would a stubborn stain, those 1-20 odds looked as though the numbers should be reversed. Determinedly, Maximum Security kept trying, but King for a Day wore him down to earn the win.

The name of that race was Pegasus, contested in Oceanport, NJ. That’s not to be confused with the event of a similar appellation renewed annually in Hallandale Beach, FL. The latter boasts several more zeroes in purse value and features a nearby iconic icon statue. Sunday’s spot was chosen to serve as a Haskell Stakes tune-up for Maximum Security; as a sparring session of sorts. A paid workout. A day at the beach. Apparently, one competitor didn’t receive the email; didn’t hear that he wasn’t supposed to win. King for a Day emerged a tiger instead of a tomato can. He took Maximum Security’s punch in mid-stretch, shook it off like a sneeze, and countered with a knockout blow to win by a length.

Of course, once Pegasus dust had settled, it quickly was replaced airborne by alibis. Many of those blamed the stumbling start as catalyst for defeat. It wasn’t the only culprit. While the slip certainly didn’t help the asterisk-wearing Kentucky Derby winner, it wasn’t the main reason he lost Sunday. What really kept Maximum Security from finishing first for the sixth consecutive time in as many starts was a combination of factors.

Mainly, give credit for that to King for a Day. After winning the Sir Barton at Pimlico on the Preakness undercard he was ‘ready for his closeup,’ Mr. Pletcher. The Pegasus is the second stakes win and third triumph out of five starts for the developing son of Uncle Mo. He’s steadily improved for owners Red Oak Stable and presumably has more in the tank.

On the other hand, Maximum Security clearly was not at his best for the race. Sidelined since the Kentucky Derby, where he gave all in repelling a wave of challengers in the final quarter, he had registered just two works since May 4—a May 22, four-furlong leg-stretcher in :53 4/5 and a three-furlong blowout in 37, both at Monmouth. Do the math. That’s 24 days between breezes and just two works in 43 days! Plus, about a week before the race, trainer Jason Servis, who wins races like Babe Ruth hit home runs, was so concerned about Maximum Security’s health that he sent a sample of the colt’s blood to a lab for analysis. Now, for my money, before a race it’s never good to have your blood outside of your body unless, of course, you’re Lance Armstrong.

Don’t know exactly what the immediate future holds for Maximum Security, but connections didn’t seem overly concerned with the results. “It stinks getting beat,” said trainer Jason Servis, while philosophically waxing, “but that’s horse racing.” Servis added, “I think the stumble cost me the race. I think his next race will be better.” That ‘next race’ probably will be the Haskell at Monmouth.

Wednesday of this week, according to a report originally released by Daily Racing Form, Belmont Stakes hero Sir Winston was ruled out of action because of a slight ankle injury. Ironically, trainer Mark Casse suggested that the Pegasus—the one in Florida, not the one in New Jersey—could be a suitable long-range target.

Out west, another sophomore favorite took it on the chin in the Grade 3 Affirmed at Santa Anita. Named after the 1978 Triple Crown winner, the mile and one-sixteenth event for 3-year-olds attracted a small field of just six runners. Morning-line and starting favorite was Santa Anita Derby winner and Kentucky Derby also-ran Roadster. Second choice was Mucho Gusto, a multiple Grade 3-winning colt who eats and sleeps just down the shedrow from Roadster in the Bob Baffert barn.

Fresh off a wire-to-wire score in the recent seven-furlong Laz Barrera stakes, Mucho Gusto had a recency edge over Roadster and an early-speed advantage, too. While wide he stalked the Affirmed pace, moved to the lead in the lane and won comfortably. Fittingly, Mucho Gusto completed the Laz Barrera/Affirmed Stakes parlay—Barrera famously trained Affirmed. Roadster, also a bit wide while finishing second in the race, again proved he’s a grinder that probably needs more ground for his best. Off since the Kentucky Derby, the race ought to serve him well in the conditioning department. Perhaps the Travers is in his future.

There’s a good chance that several sophomores mentioned above—at least the ones still racing--will clash in the Haskell Stakes at Monmouth. Seems a logical spot for Maximum Security and King for a Day. Baffert already has suggested that ‘The Shore’s Greatest Stretch’ is a likely late-July destination for Mucho Gusto.

Overall, the 3-year-old picture seems as muddled as it was in March. The divisional crown is up for grabs and two out of four Triple Crown race winners won’t be around to dispute it. So, where does that leave us? Disappointed? Frustrated? Unimpressed? Maybe. If so, hang in there. Usually, when sophs stumble, one soon emerges to save the day. Stay tuned!