What if Eclipse Award Votes Were Cast Today? 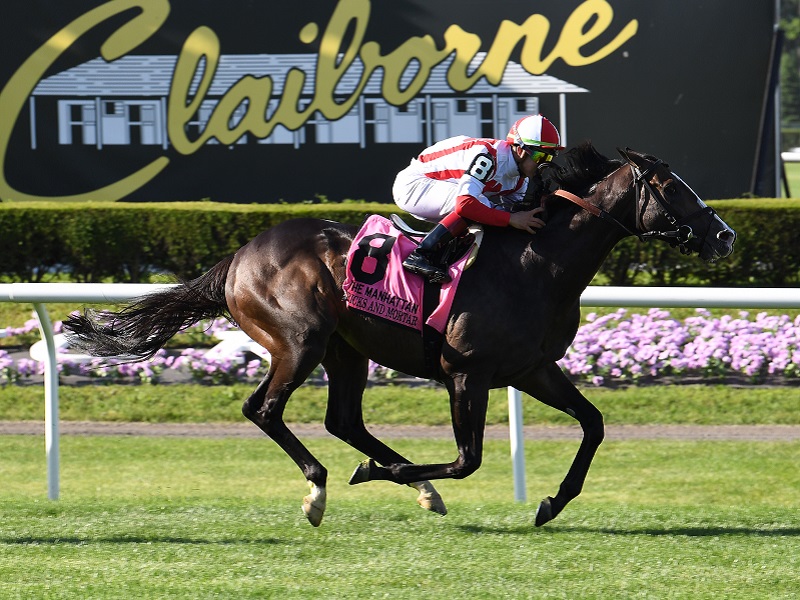 We are just about halfway through 2019. With that in mind, what if there were such a thing as Mid-Year Eclipse Awards? These would be my votes, excluding the 2-year-old, human and steeplechase categories.

If Maximum Security had won the Pegasus Stakes at Monmouth Park on June 16, he would have been my choice in the category. But after he finished second as a 1-20 favorite in the Pegasus, my choice instead is War of Will.

War of Will, trained by Mark Casse, won three graded stakes races during the first half of 2019. He took the Grade III Lecomte and Grade II Risen Star at Fair Grounds Race Course & Slots and Grade I Preakness at Pimlico. The Kentucky-bred War Front colt would have been a slam-dunk choice if he also had won the Grade I Belmont Stakes instead of finishing ninth. But despite his disappointing performance in the Belmont, he gets the nod from me in this category.

I still believe Omaha Beach was the best 3-year-old male I saw during the first half of 2019. But I think that by winning three graded stakes races, including the Preakness, War of Will has achieved just a bit more than Omaha Beach so far this year.

After winning a division of the Grade II Rebel Stakes and Grade I Arkansas Derby, both at Oaklawn Park, Omaha Beach was installed as the 4-1 morning-line favorite in the Kentucky Derby. However, Omaha Beach was scratched from the Run for the Roses due to an entrapped epiglottis that required surgery. He now is back in training with Hall of trainer Richard Mandella at Santa Anita.

Maximum Security won the Grade I Xpressbet Florida Derby. He then finished first in the Grade I Kentucky Derby, but the stewards disqualified him and placed him 17th for committing a race foul. Maximum Security veered out sharply approaching the five-sixteenth pole to cause interference to War of Will, Bodexpress and Long Range Toddy.

In terms of who eventually will get the 2019 Eclipse Award in this category, it is wide open heading into the second half of the year. Races still be run that figure to be key are the Grade I Haskell Invitational at Monmouth on July 20, Grade I Travers Stakes at Saratoga on Aug. 24, Grade I Pennsylvania Derby at Parx Racing on Sept. 21 and Grade I Breeders’ Cup Classic on Nov. 2.

The sky appears to be the limit for Guarana, who has dazzled in both of her career starts. When unveiled at Keeneland on April 19, Guarana splashed away from her rivals to win a 6 1/2-furlong maiden race on a sloppy track by nearly 15 lengths on April 19.

Off just that debut victory, Guarana then won the Grade I Acorn Stakes by six widening lengths at Belmont Park on June 8. The Kentucky-bred Ghostzapper filly, trained by Chad Brown, completed one mile in an excellent 1:33.58.

This choice is easy.

Mitole is four for four this year. The 4-year-old Kentucky-bred Eskendereya colt, trained by Hall of Famer Steve Asmussen, is a three-time graded stakes winner thus far in 2019. He won the Grade III Count Fleet Sprint Handicap on a sloppy strip at Oaklawn in April and Grade I Churchill Downs Stakes in May prior to getting the job done in a strong edition of the Grade I Met Mile at Belmont earlier this month.

McKinzie, runner-up in the Met Mile when he had a troubled trip, won the Grade II Alysheba at Churchill on May 3 with authority by 4 3/4 lengths. His Alysheba effort subsequently was flattered by Seeking the Soul when he recently won the Grade II Stephen Foster at Churchill after finishing third in the Alysheba.

City of Light, in the final start of his racing career prior to beginning stud duty, won Gulfstream’s Grade I, $9 million Pegasus World Cup by almost six lengths in January. Among those left in his wake were Seeking the Soul, who finished second, and Acclerate, who came in third. Accelerate went into the Pegasus World Cup off a triumph in the Grade I Breeders’ Cup Classic.

This is another easy choice.

Elate, second in the Azeri and third in the Apple Blossom, won the Grade II Fleur de Lis Handicap at Churchill Downs.

She’s a Julie finished third in the Fleur de Lis after winning the Grade III Bayakoa Stakes at Oaklawn and Grade I La Troienne Stakes at Churchill.

World of Trouble won the Grade I Carter Handicap on the dirt at Aqueduct in April. He also was victorious in the Grade I Jaipur Stakes on the turf at Belmont in June. He’s a three-time graded stakes winner in 2019. The 4-year-old Florida-bred Kantharos colt also won a Grade II grass sprint at Churchill in May for trainer Jason Servis.

Not all of Mitole’s four 2019 wins have come in races at seven furlongs or shorter. As mentioned earlier, one of Mitole’s victories this year came in the Met Mile, though some consider a one-turn mile race like that to be kind of a long sprint.

X Y Jet won an allowance/optional claiming sprint in the slop at Gulfstream in February. He then posted a 1 1/2-length win in the Group I, $2.5 million Dubai Golden Shaheen at Meydan in March.

Mia Mischief, yet another Asmussen-trained runner, won Churchill’s Grade I Humana Distaff by 1 3/4 lengths in May at seven furlongs. The 4-year-old Kentucky-bred Into Mischief filly then won the six-furlong Roxelana Overnight Stakes by three-quarters of a length at that same venue last Saturday when the vanquished included 3-year-old Covfefe.

Break Even is five for five in her career, all this year in races at seven furlongs or shorter. The 3-year-old miss has one graded stakes victory to her credit. She won C Churchill’s Grade II Eight Belles by 5 1/2 lengths on a sloppy track May 2 at seven furlongs in a dominant performance.

Covfefe, in an eye-catching display of sheer speed, won Pimlico’s six-furlong Miss Preakness Stakes by 8 1/2 lengths in a sizzling 1:07.70 on May 17. Her final time destroyed the track record of 1:09.00 set by Northern Wolf back in 1990. But after Covfefe won the Miss Preakness, she was outrun by the older and more seasoned Mia Mischief last Saturday in Louisville.

Bricks and Mortar, trained by Chad Brown, has won each of his four starts this year, all on the turf. And all four of those victories by the 5-year-old Kentucky-bred son of Giant’s Causeway have come in graded stakes races. He won the Grade I, $7 million Pegasus World Cup Turf at Gulfstream in January, Grade II Muniz Memorial Handicap at Fair Grounds Race Course & Slots in March, Grade I Turf Classic at Churchill in May and Grade I Manhattan at Belmont earlier this month.

Catholic Boy made his 2019 debut a winning one in Pimlico’s Grade II Dixie Stakes on May 18. Granted, it was not a Grade I race, but that still was a fine comeback effort on his part, particularly in that he broke from the outside post in the field of 10.

For third in this category, I opted for Bolo over Delta Prince in a close call. They each won a Grade I race during the first half of the year. Delta Prince won the Grade I Maker’s 46 Mile at Keeneland in April, but then finished seventh when Bolo won Santa Anita’s Grade I Shoemaker Mile in May.

Not only is Rushing Fall two for two this year, both victories have come at the Grade I level. The 4-year-old Kentucky-bred More Than Ready filly, a member of the powerful Chad Brown string, won the Grade I Jenny Wiley at Keeneland in April and Grade I Just a Game at Belmont earlier this month.

Vasilika is four for four this year, all in graded stakes events at Santa Anita. She won the Grade III Megahertz in January, Grade II Buena Vista in February, Grade II Royal Heroine in April and Grade I Gamely in May.

Homerique is two for two this year, with both wins coming in graded stakes races at Belmont. She won the Grade III Beaugay in May and Grade II New York earlier this month.

My choice is Bricks and Mortar, a triple Grade I winner during the first half of 2019. Few horses win three Grade I races in an entire year, let alone in just half a year.

A “ROYAL DOUBLE” FOR BLUE POINT

Blue Point achieved something pretty darn cool in England last week at the prestigious Royal Ascot meeting. He won the Group I King’s Stand Stakes by 1 1/4 lengths at five furlongs on June 18, then just four days later captured the Group I Diamond Jubilee Stakes at six furlongs in a nail-biter of a finish by a head.

What a neat horse.

In Blue Point’s most recent start prior to his “royal double” last week, he won the Group I, $2 million Al Quoz Sprint on the turf in Dubai. He is five for five this year.

Charlie Appleby trains Blue Point for Godolphin. The 5-year-old Irish-bred son of Shamardal will race no more. For Blue Point “to do what he did within five days [at Royal Ascot] was the pinnacle of his career,” Appleby was quoted as saying to the Racing Post.

All told, Blue Point won 11 of 20 lifetime starts and accumulated earning of $3,336,810. He certainly demonstrated an affinity for racing at Ascot (six starts, five victories).

Blue Point will begin his new career as a stud in England next year at Sheikh Mohammed’s Dalham Hall Stud.

Backed down to 3-5, Owendale rallied from last in the field of six and proved a punctual favorite in the Grade III Ohio Derby at Thistledown last Saturday.

Trained by Brad Cox and ridden by Florent Geroux, Owendale won the 1 1/8-mile affair by a half-length in 1:50.88. Math Wizard, off at 5-1, gave it a good try and finished second. Long Range Toddy ended up third at 2-1, a little more than nine lengths behind Math Wizard.

Global Campaign, winner of the Grade III Peter Pan Stakes at Belmont on May 11, was withdrawn from the Ohio Derby. He reportedly has a foot issue.

Owendale has won two of his last three starts. The Kentucky-bred Into Mischief colt won the Grade III Lexington Stakes by 1 3/4 lengths on April 13, then finished third in the Preakness on May 18 prior to his Ohio Derby triumph.

As I noted last week, Owendale recorded the best Thoro-Graph figure of the 13 starters in this year’s Preakness.

AN AMUSING EXCUSE FROM A JOCKEY

“Sorry, boss, I rode him like a camel,” Bauer said. “How am I supposed to get mad at him after saying that?”