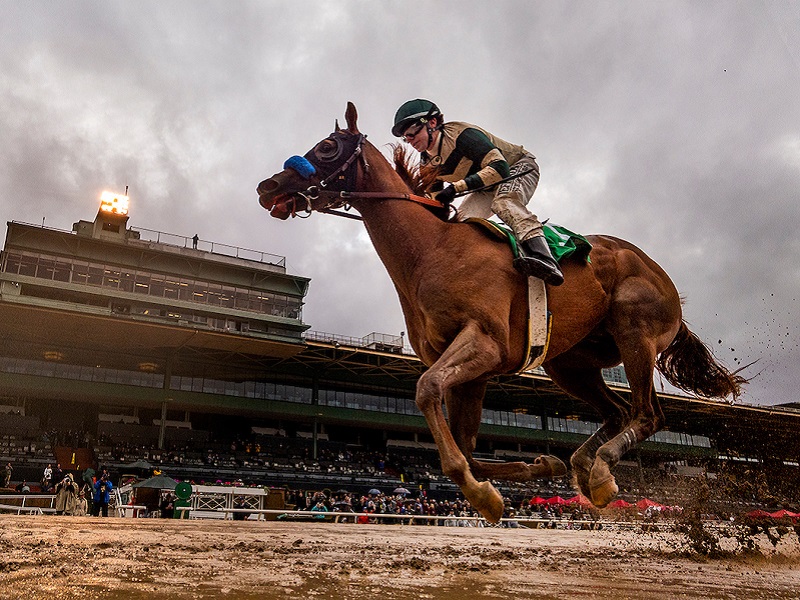 This wasn’t planned. At least I don’t think so. Why would it be? And by whom? How would they know? And, if they did know, why would they even care? As frustrating as betting horses can be…this is just plain torture. Cruel and unusual punishment, I’d say. It’s a long way to go to aggravate a single horseplayer. Even the most devout conspiracy theorist couldn’t conjure up this one. It’s got to be pure coincidence. Bad luck. Fate. How else can you explain an unholy reunion in the Haskell Stakes of runners responsible for personal 2019 Triple Crown high, low and even lower moments?

Saturday’s forecast predicts temperatures that are hotter than hell. Not to worry, it’s a dry heat…like my oven! Saratoga already has cancelled Saturday racing and so have other east-coast tracks. At this writing, Monmouth is still in action and the Haskell is on tap. A 5PM ET NBC national television broadcast may have something to do with that, plus a Breeders’ Cup ‘Win and You’re In’ free pass also is on the line. So, the show may go on. If it does, let’s hope everyone returns safely, including those Triple Crown veterans who’ve gathered to torment me again.

On the first Saturday in May, original Kentucky Derby winner Maximum Security appeared to have completed a pick five wager that would have earned yours truly a near $5,500 payoff for a 50-cent wager. An additional healthy win wager at glorious 9/2 odds also seemed achieved. Well, we all know what happened then. As they say on television, ‘Let’s run the video tape.’ It took nearly 25 minutes for Churchill stewards to deliver the worst miscarriage of justice since the OJ verdict. Am I biased? Yes. Not only did I have a dog in the fight, my dog won! Maximum Security was disqualified from first for interference and placed 17th and my ‘high’ suddenly became a ‘low.’

In the Preakness, yours truly was all over the tris and supers except for a minor detail: I neglected to use nearly 30-1 runner-up Everfast in the two-hole. Oops! Earlier in the season, the son of Take Charge Indy had been second in the Holy Bull and then was a nowhere-ninth in both the Fountain of Youth and Florida Derby—beaten at least 15 lengths in each. His form then improved a bit when he was fifth, beaten 10-lengths in the Pat Day Mile. Still, I didn’t see that train coming down the tracks and it cost me. Honestly, after the race, I still don’t see that train coming.

Three weeks later, yours truly nailed Belmont Stakes tris and supers…sort of…except he failed to include nearly 22-1 third-place finisher Joevia anywhere on his tickets. In fact, Joevia was the only horse he completely left out of his wagers. Why? Because there was no way the speed horse, who previously had won just two races--both over sloppy tracks in front-running fashion-- was going to last at a mile and one-half around Big Sandy. At least that’s what I thought.

All three of my Triple Crown antagonists have gathered to torment me again in the Haskell Stakes. They’re joined by four others. How will it end this time? Which will deliver a crushing blow to my tris or supers? Will it be a new soph spook emerge to haunt my house? Joining my previous tormentors in the Haskell are Pegasus winner King for a Day; Parx allowance winner Spun to Run; Ohio Derby fourth-place finisher Bethlehem Road and California invader Mucho Gusto.

Below is one man’s horse-by-horse opinion of the Haskell Stakes field with a suggested wagering strategy. However, I’m not exactly sure why anyone would follow it. Three of these runners already have punished me this season.

1. King for a Day Pletcher/Velazquez
A winner of three of five starts, King for a Day upset 1-20 favorite Maximum Security in the Pegasus Stakes at Monmouth last out. ‘King may have caught ‘Security a bit short for that race, but it was run in competitive time with the winner earning an impressive 102 Beyer Speed Figure. The number was the best in the son of Uncle Mo’s five races and extended his streak of improving Beyer Speed Figures. Hall of Fame jockey John Velazquez, who rode King for a Day in his previous four starts, will return in the saddle for the Haskell to replace Pegasus-winning rider and Jersey legend Joe Bravo. King for a Day has speed and Velazquez probably will want to maintain the rail position throughout, so look for him to be close to whatever develops on the front end in a race loaded with pace.

2. Joevia Sacco/Lezcano
Never imagined that this one would hang around for a serious slice of the Belmont pie but he did. He finished third, less than two lengths shy of winner Sir Winston. This son of Shanghai Bobby is a fresh speed horse with a :58 2/5 bullet work at Monmouth for this. Expect him to have a say in the early pace picture. He is two for two at Monmouth--one a maiden first-out sprint in ’18 and the other the mile and one-sixteenth Long Branch Stakes--both in the slop.

3. Spun to Run Guerrero/P. Lopez
Blinkers go in for this sharp Parx invader that has parlayed two open-length victories into a Haskell starting slot. It took five outings for this son of Hard Spun to break his maiden but when he did, he came back next out to route $50k optional claiming, first-level allowance foes in nearly wire-to-wire fashion. He’s got speed, but not as much as either of the two horses inside of him. He figures as an outsider in here.

4. Bethlehem Road Curry/LA Rodriguez
This son of Quality Road also hails from Parx and ripped off three consecutive dominating wire-to-wire wins at that track, including a $75k stakes race at a mile and 70-yards. Last out he was a well-beaten fourth of six—over 23-lengths back—in the Ohio Derby taken by Preakness show horse Owendale. Bethlehem Road figures to have company early in this race and it’s difficult to imagine how he’s going to survive that battle.

5. Mucho Gusto Baffert/Talamo
As if there weren’t enough local speed in this year’s Haskell, they went and imported another quick one from California out of the Bob Baffert barn. Now, Bob Baffert-trained Haskell starters are about as successful as Nick Saban-coached Alabama football elevens. If they don’t win the big one, they sure do come close often. Mucho Gusto was part of Baffert’s second string on the Triple Crown trail. Winner of the Robert B. Lewis at Santa Anita, he made the travelling squad but then was sidelined after finishing third in the Sunland Derby. He’s returned in fine fettle; winning the seven-furlong Laz Barrera and the mile and one-sixteenth Grade 3 Affirmed in back-to-back races. He’s been training lights-out for Baffert over a slower Santa Anita surface with three works since the Affirmed—two of them six-furlong bullet moves. Mucho Gusto has shown the ability to rate just off of foes, so that versatility will come in handy in here. Joe Talamo has ridden him in every start and will again Saturday.

6. Everfast Romans/Leparoux
Following his surprising runner-up effort in the Preakness, Everfast finished seventh, beaten just over three lengths in the Belmont Stakes. He’s been in training at his Churchill Downs base since. On paper this appears to be precisely the kind of field that should give Everfast a puncher’s chance—plenty of early pace to set up his closing style. Perhaps countering that perceived advantage is the fact that the Monmouth Park strip notoriously favors front-runners. While Everfast has just one win in 12 starts—a maiden at Ellis in August of ’18—he’s earned nearly $500k on the strength of two seconds and one third! If he’s any kind of price in here he’s worth a look

7. Maximum Security Jason Servis/L Saez
While an outside draw for a speed horse usually is a grand thing, racing gods didn’t do ‘Security any favors by putting him on the far outside going a mile and one-eighth at Monmouth. True, he’s got plenty of speed and will use it early, but connections would rather save a bit of that energy for the end. This son of New Year’s Day will be favored in here and should be tighter after his defeat in the Pegasus—which was no disgrace at all. That race produced a 100 Beyer Speed Figure—the fourth consecutive time he’s cracked the Beyer century mark! He’s the fastest horse in the race. However, he’s a short price and has a compromising draw outside several other speed horses. That will force jockey Saez to go faster than desired early. Is he talented enough to overcome that obstacle? Maybe.