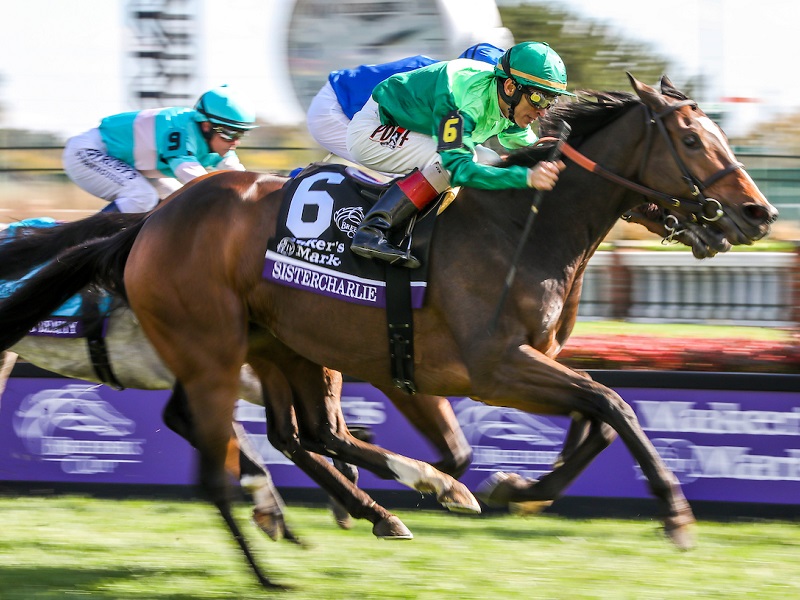 Since their inception in the mid-1980’s, neither of Arlington Park’s two premier races – the Arlington Million and Beverly D Stakes – has been won by the same horse in back-to-back seasons.  John Henry won the Million in both 1981 and 1984, but back-to-back?  That’s never happened before.

Defending champions Robert Bruce (Arlington Million) and Sistercharlie (Beverly D) are back in action this Saturday at Arlington Park and both has a big chance to defend their title.

Sistercharlie’s path appears slightly easier, as she is the prohibitive favorite amongst a field of eight entered for the Beverly D.  Her primary rivals are Aidan O’Brien’s Fleeting and her own stablemate, Competitionofideas.  That said, if Sistercharlie runs her race she’s going to be awfully tough to deny.

In the ‘Million, Robert Bruce will compete against his stablemate Bricks and Mortar for the second consecutive race.  In the Manhattan Stakes on June 8, Robert Bruce was forced to settle for second, beaten 1 1/2-lengths while enduring a rough trip.  Can a jockey switch to Javier Castellano turn things around?

Customers that hit the Late Pick 4 will Split 1 Million XB Rewards Points.  To play simply register for the contest (it’s free and only takes a few seconds) and when you win you can redeem your Rewards Points for everything from wagering credits to tickets to your favorite tracks.

Defending champion SISTERCHARLIE is clearly the best of the US horses.  She has ripped off four wins in a row and five in seven starts since coming across the pond to race for Chad Brown in 2017.  Plus, she won this race last year so we know she likes the Arlington sod.  Aidan O’Brien’s FLEETING gets in light as a three-year-old (she’ll only carry 117lbs to SISTERCHARLIE’s 123) and she has run well in Group 1 and Group 2 competition this year.  If not for Star Catcher, she’d have won a G2 at Royal Ascot and a G1 at the Curragh.  Still not sure where MAGIC WAND will run (Beverly D or Arlington Million) but not a big fan of her in either spot.

If we get through the Beverly D on a single, we’ll hopefully be in a good spot to get through the Secretariat by using a handful of horses.  It’s worth noting that favorites have performed exceptionally well in this race recently.  Since 2009, favorites are 10-6-2-1 in the race (60% win, 90% top three).  Aidan O’Brien has won this race four times overall (three times since 2011), but US-based runners have won the last three.  I’m going to use O’Brien’s NEVER NO MORE, along with two Chad Brown horses – FOG OF WAR and VALID POINT, and I’ll toss in RY’S THE GUY and CLINT MAROON.  I’m going to take a stand against the three horses coming out of the G3 American Derby.  They were separated by a neck at the finish and I just think that race didn’t rank that highly as a prep.

Defending champion ROBERT BRUCE and stablemate BRICKS AND MORTAR figure to take most of the money here, just as they did in the G1 Manhattan on the Belmont Stakes undercard.  They ran 1-2 that day, with BRICKS AND MORTAR having the cleaner trip.  ‘BRICKS has won 4-of-4 races this year, while ‘ROBERT is 0-for-4 since winning this race last summer.  Both are in great form for Chad Brown.  The only worry is pace.  What happens if they get caught behind dawdling fractions?  I do think some combination of CATCHO EN DIE, HUNTING HORN or BANDUA will ensure a fair pace and I’m a little worried about tossing HUNTING HORN.  It’s Aidan O’Brien and Ryan Moore and the last time he was in the US he nearly upset the G1 Man O’ War at odds of 12/1.  He’s battled against the likes of Enable, Magical, Crystal Ocean and Waldgeist in recent races and while he’s simply not that good, he’s better than most of the US horses outside of the top two.

The final leg of the Late Pick 4 is the Pucker Up and CAFÉ AMERICANO is going to be very popular on most tickets.  She won her first two starts for Chad Brown but came up short in the G1 Belmont Oaks last out.  She’s a classy filly, but the Brown/Irad Ortiz angle will cause her to be overbet and, honestly, she’s never really run a fast race.  ART OF ALMOST ran a phenomenal race against a pair of elite older horses (Holy Helena, Starship Jubilee) in the G2 Dance Smartly at Woodbine and she’s the likeliest winner here off that effort.  My ticket also includes WINTER SUNSET and Graham Motion’s MERCILLA at a huge price.  Toss her last race in the Christina Stakes at Delaware…she just doesn’t like the dirt.

Ticket Cost: A $1 Pick 4 of all of my horses only costs $60, or you can play the 50-cent version for $30.  I’ll probably mess around with a few other tickets, as well, to maximize my chances at a decent return.  I’ll single Bricks and Mortar on a ticket or two.