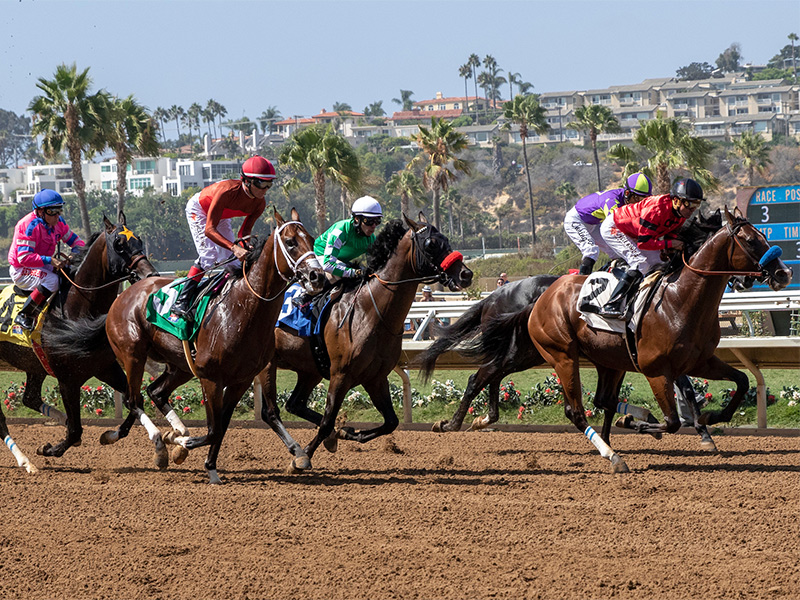 Forecast: The Friday opener is a restricted (nw-3) $20,000 claimer that brings together shippers, class droppers, surface switchers, and runners that just changed barn. It’s an inscrutable affair in which nothing would surprise. Mongolian Humor hasn’t hit the board in five starts this year but she’s been chasing much tougher foes and gets significant class relief today while owning recent speed figures that are good enough to worry the boys. At 6-1 on the morning line, the daughter of Drosselmeyer seems as good as any so we’ll put her on top. Zakaroff is a Bay Area invader now in the A. Mathis barn with reasonable recent form but winless in the last two years. R. Bejarano should have him within striking range throughout, but what this gelding does with that kind of trip is anybody’s guess. So Long Sailor, in from Lone Star and eligible to the valuable ship-and-win bonus, won over this main track last year and brings from Texas decent recent form for new trainer E. Kruljac. The son of Quality Road won a restricted claimer gate-to-wire two runs back so we suspect similar tactics will be employed today.

Forecast: Marilyn’s Smile appeared to find her best stride too late when a close fourth in a similar turf sprint here last month. She can do better, and with a repeat of her race before last the daughter of Smiling Tiger looks capable of producing the last run. Rose Dunn won her debut last December at 2/5 at Los Alamitos, but then disappeared. Her works leading up to this comeback look pretty decent for B. Koriner, who has a superior record (30% with a flat-bet profit) with layoff runners, and the daughter of Violence will wear blinkers this time around, so we’re expecting her to flash improved early speed. If she breaks well from the rail, she may never look back. Fantasy Heat, third in the same race our top pick exits, finished a head in front her main rival and, truthfully, there’s very little separating them. These are the three we’ll be using in our rolling exotics with very slight preference on top to Marilyn’s Smile.

Forecast: Here’s an open $20,000 main track miler that brings out two major contenders from the S. Miyadi barn. Both Clear the Mine and Implicitly were claimed for $16,000 and move up a notch for a barn that has very strong stats with this angle (22%). Both are coming off wins, with Implicitly breezing home by eight lengths at Los Alamitos and Clear the Mine achieving his victory over the Del Mar main track by a hard-fought head. Implicitly earned the slightly better number but his devout front-running style over this anti-rail track makes him somewhat untrustworthy. Maybe the one to latch onto is Cabin John, who prefers a stalking trip and might get it at this level. Claimed for $35,000 two runs back and then well-beaten in a starter’s allowance race at Los Alamitos last month, the Gio Ponti gelding has numbers that can win and will appreciate this class drop. D’Amato is overdue to get hot, so while we’ll include all three in our rolling exotics, Cabin John gets top billing.

Forecast: Ice Angel attracts F. Prat, who normally doesn’t ride maiden claiming two-year-olds, so we’re going to assume that this R. Baltas-trained filly has some run. The workouts aren’t much on paper, but she’s a good mover and probably has more speed than she’s been permitted to show, so we’ll make her an interesting gamble at 6-1 on the morning line. Eye On Tiger brought $55,000 at Barretts last year and is bred to win early (Smiling Tiger), so by default she’s a contender. A bullet gate work (:35 1/5 seconds) last month at Santa Anita catches the eye, but if she was all that she’d probably be in a straight maiden race which offers a much better purse and a Cal-bred bonus award. We can use her as a saver, but the main punch goes to Ice Angel.

Forecast: Speakerofthehouse shows up in a high-priced claimer for the first time and should be capable of producing the last run. The son of Temple City has had eight chances, but none against a field as weak as this one, so we’re expecting the I. Kruljac-trained 3-year-old to wear down the speed in the final stages. Seeking Refuge hails from the hot D. O’Neill barn and could be a late threat in a race begging to be won from behind. R. Bejarano stays aboard and likely will take him back from his outside draw and try to produce a late bid. Boru, in the money in his last five but unable to seal the deal when appearing home free in his last four, will try to take this field gate to wire again but certainly isn’t one to trust. Yes, he could win, but at 2-1 on the morning line he’s a hard one to trust.

Forecast: This $50,000 claimer for 3-year-olds came up pretty light. After breaking his maiden in a high priced claimer in February at Santa Anita with a decent number, Platinum Nights went up north to tackle allowance foes over the all-weather surface at Golden Gate Fields but failed to fire. Freshened since late May, the P. Eurton-trained colt drops to a realistic spot and is reunited with “win rider” M. Smith, who should be able to secure an ideal pace forcing or prompting trip outside in a field without much zip. Rickey B returns to his claim level and switches to F. Prat, so this son of Richard’s Kid should get plenty of support. No factor when overmatched in a grass sprint at Santa Anita in May, he should go much better at this level, and with five wins in seven career starts the J. Sadler-trained colt certainly knows where the wire is. We press with extra tickets keying Platinum Nights on top but include both in our rolling exotics.

Forecast: Sneaking Out was upset at 10 cents on the dollar in the Fleet Treat S. last month but had the misfortune of breaking from the rail and racing along the very deep inside lane most of the way. She paid the price late, giving up a three length lead inside the furlong pole to be nosed out at the wire. Today she stretches out, tries grass for the first time and switches to M. Smith, so we’re expecting the daughter of Indian Evening to make amends. A runner-up effort in the middle distance Summertime Oaks-G2 shows that she can handle two-turns. Mo See Cal, off the track since February, has been training very well for P. Miller, gets F. Prat (who has won on her in the past), lands the rail, and won two-turning over this grass course last year. She has back numbers that chart very well with this group, so at 5-1 on the morning line the daughter of Uncle Mo is a “must use.”

Forecast: The finale is a bottom-rung maiden claiming abbreviated sprint with nothing to trust, so best advice is to go as deeply as you can afford to in rolling exotic play. Trainer D. Dunham has two contenders, both drawn inside. White Russian had the misfortune of drawing the dreaded rail but ran well when beaten a head in his debut and has every right to improve with that bit of experience behind him. Golden Image has hit the board in five of eight career starts and probably will get at least a piece of it again. We’ll also toss in Red Valor, who has the benefit of the outside draw and drops to the bottom. This barn rarely wins and this gelding’s speed figures have stagnated, but somebody has to win and just might be him.