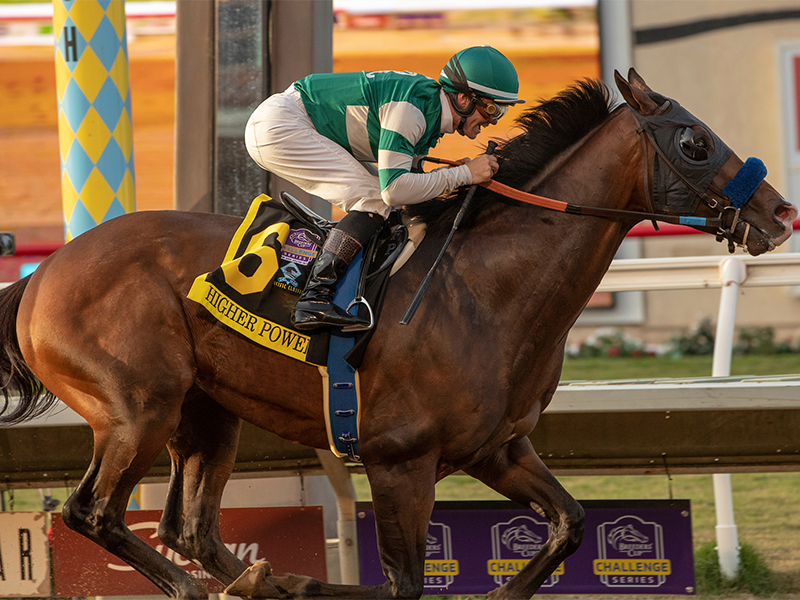 Revenge is sweet, even when it takes 16 years to get it.

Back in 2003, Medaglia d’Oro was sent away as the 3-5 favorite in Del Mar’s Grade I Pacific Classic on Aug. 24 following a win in the Grade I Whitney Handicap at Saratoga on Aug. 2.

Medaglia d’Oro, with Jerry Bailey riding for trainer Bobby Frankel, ran quite well in the 1 1/4-mile Pacific Classic that year. In fact, he ran well enough to be credited with a 118 Beyer Speed Figure.

Off at 2-1 in the field of four, Candy Ride won the 2003 Pacific Classic by 3 1/4 lengths for trainer Ron McAnally. Ridden by Julie Krone, Candy Ride posted a final time of 1:59.11 to break the track record, a mark that still stands. Candy Ride recorded a 123 Beyer Speed Figure. It was the highest Beyer of 2003.

Medaglia d’Oro had to settle for second in the 2003 Pacific Classic. But he gained a measure of revenge when his son Higher Power won the 2019 Pacific Classic last Saturday with authority by 5 1/4 lengths in 2:02.43. Settling for second this time was Draft Pick, a son of Candy Ride.

Higher Power was not the only Medaglia d’Oro offspring to win a Grade I race at Del Mar last Saturday. In the race just prior to the Pacific Classic, the Medaglia d’Oro filly Cambier Parc unleashed a furious late kick to win the Grade I Del Mar Oaks going away by 1 1/4 lengths at 1 1/8 miles on the grass. John Velazquez rode Cambier Parc, an East Coast invader conditioned by Chad Brown.

Flavien Prat was aboard Higher Power in the 2019 Pacific Classic for trainer John Sadler. Earlier this year, Prat won the Kentucky Derby in a huge upset aboard 65-1 Country House, who was elevated to first when the stewards disqualified Maximum Security and placed him 17th for veering out sharply nearing the five-sixteenths marker to cause interference to War of Will, Bodexpress and Long Range Toddy.

The Pacific Classic was one of six wins by Accelerate last year. His 2018 campaign was highlighted by a one-length triumph in the Grade I Breeders’ Cup Classic at Churchill Downs. Accelerate’s other wins last year came in the Grade II San Pasqual Stakes, Grade I Santa Anita Handicap, Grade I Gold Cup at Santa Anita and Grade I Awesome Again Stakes. His splendid campaign netted him a 2018 Eclipse Award as champion older male.

In Higher Power’s most recent start prior to the Pacific Classic, he finished second in Del Mar’s Wickerr Stakes at one mile on the grass July 21. The 4-year-old colt then trained smartly on the dirt at Del Mar leading up to last Saturday’s race on the main track.

Higher Power was assigned a career-best 107 Beyer Speed Figure for his Pacific Classic performance. His previous top had been a 96 when he finished fourth in the Gold Cup at Santa Anita this year on May 27 in his first start for Sadler.

These are the Beyer Speed Figures for the winners of the Pacific Classic going back to the first running in 1991:

For those of us who watched it all unfold on television in 1973, Jack Whitaker was an integral part of Secretariat’s Triple Crown sweep.

Anderson is most famous for coming up with the phrase “he is moving like a tremendous machine” when calling Secretariat’s astonishing 31-length Belmont Stakes victory.

Whitaker died from natural causes in his sleep last Sunday at his home in Devon, Pa., according to CBS Sports. He was 95.

“There will never be another Jack Whitaker in sports broadcasting,” CBS Sports chairman Sean McManus said in a statement. “His amazing writing ability, on-air presence and humanity are unmatched. His unique perspective on sports ranging from horse racing to golf to NFL football was extraordinary."

A native of Philadelphia, Whitaker began his broadcasting career in radio. He became a network television sportscaster at CBS in 1961. He joined ABC in 1982, covering both news and sports for that network. Whitaker was part of ABC’s Olympics coverage in 1984 and 1988.

Inducted into the National Sportscasters and Sportswriters Hall of Fame in 2001, Whitaker won an Eclipse Award for national television achievement in 1977. He was honored with the Jim McKay Award for excellence in broadcasting by the National Turf Writers and Broadcasters in 2013.

E.S. “Bud: Lamoreaux III was a longtime broadcasting colleague of Whitaker’s at CBS.

“It ranks as one of the greatest sporting events in history -- Secretariat’s Belmont that broke a long Triple Crown drought and gave Americans something to root for in a time of Watergate and Vietnam,” Lemoreaux wrote in a tribute to Whitaker posted by The Paulick Report. “What is lost in all those feel good moments is the performance of the CBS broadcast team headed by Jack Whitaker. He was the silver-tongued orator from Philadelphia who could turn a phrase as quickly as Secretariat could get to the wire.”

I recently wrote about Maxwell G., a Washington-bred gelding who became a claiming legend by winning 47 of 234 career starts.

Those 47 wins by Maxwell G. are even more impressive when taking into account that he did not race at 2 or 3. The final victory of his remarkable career occurred early in 1977 at Turf Paradise. At the advanced age of 16, Maxwell G. won a $2,000 claiming contest at one mile.

Pacific Northwest racing legend Turbulator, like Maxwell G., was a Washington-bred gelding who did not race at 2 or 3.

It’s hard to believe that it was 50 years ago this week that Turbulator visited the winner’s circle for the first time. It happened on Aug. 22, 1969, at Playfair Race Course in Spokane, Wash. I still have my program from that day. The program cost 35 cents.

Turbulator was the No. 7 horse in the second race. He was the 2-1 morning-line favorite. Ten competed in the six-furlong maiden special weight contest. The purse was $800.

My program for Turbulator’s Aug. 22 race shows that he was owned by Farnsworth and Crawford. T.O. Crawford was listed as the trainer, Frank Inda as the jockey. Crawford was Tom Crawford, who also bred Turbulator.

From Aug. 22 to Oct. 26, Turbulator reeled off seven straight wins at Playfair.

On Aug. 16, 1970, Turbulator broke a world record. He ran 6 1/2 furlongs in 1:14 flat to win the Governor’s Handicap at Longacres by a half-length. He clipped two-fifths of a second off the world mark.

A head bust of Turbulator can be seen these days at the Washington Racing Hall of Fame exhibit located in the Emerald Downs grandstand. It’s the same head bust that for many years greeted horses, trainers and visitors to the Playfair paddock.

Turbulator was inducted into the Washington Racing Hall of Fame in 2004.

A CONNECTION TO MARYLOU WHITNEY

Turbulator was a son of Cold Command and the By Zeus mare Fur Piece. Racing for C.V. “Sonny” Whitney, Cold Command finished ninth in the 1952 Kentucky Derby won by Hill Gail. The owner’s wife at that time was Marylou Whitney, who just recently passed away on July 19 at the age of 93.

At 3, Cold Command finished second in the Blue Grass Stakes at Keeneland. At 4, he won the Westchester Handicap in New York. At 5, he won the Saratoga Handicap.

Cold Command was a son of War Admiral and the Mahmoud mare Monsoon.

War Admiral, the 1937 Triple Crown winner, was by Man o’ War. Many, including yours truly, consider Man o’ War to be the greatest Thoroughbred of all time.

As a multiple stakes winner with an attractive pedigree, Cold Command had much appeal as a prospective sire. Penny Farms purchased him from Whitney to race him and then stand him at stud in Washington.

At 8 in 1957, Cold Command won the British Columbia Handicap at Longacres. It was the first stakes victory of Jim Penny’s highly successful training career. Penny, who died in 2017 at the age of 82, won the Longacres Mile -- the biggest race in the Pacific Northwest -- a record five times.

Cold Command’s first crop consisted of just six foals. Yet from that small crop came Sparrow Castle, who won six stakes races at the 1961 Longacres Mile meeting, highlighted by a victory in the Longacres Mile.

But of Cold Command’s 123 foals, none accomplished more than Turbulator, who 50 years ago this month registered the first of his 21 victories.

Higher Power cracked the Top 10 in this week’s NTRA Top Thoroughbred Poll following his impressive win in the Pacific Classic.