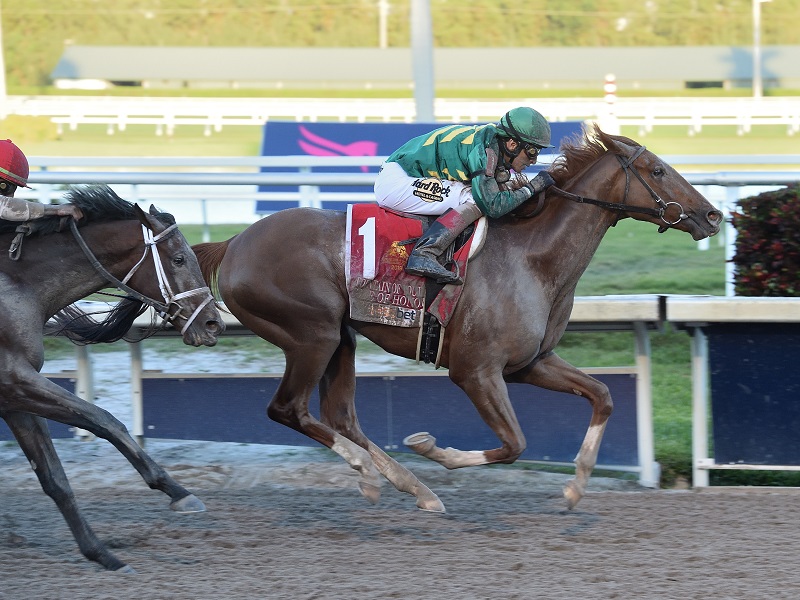 With twelve horses entered in Saturday’s Travers Stakes (Saratoga, Race 11, 5:44PM ET), handicappers who successfully separate the contenders from the pretenders have the opportunity to hit big if what happens on the track matches what they bet with their Xpressbet account.

CODE OF HONOR (4/1) was my pick on the First Saturday in May in the Kentucky Derby and while we won’t get another crack at betting him at 14/1 odds, he’s still the horse I’m going to center my bets around. I thought he ran a phenomenal race in the Derby, especially considering the way that race unfolded didn’t reflect what I think is his preferred running style. I think he’s a ‘one-run’ type of horse and his early move into contention in the slop at Churchill Downs may have caused him to tire a bit late.

Furthermore, I liked CODE OF HONOR’s comeback race in the G3 Dwyer at Belmont on July 6. He looked great down the lane and that should set him up perfectly for a big Travers run. Plus, I LOVE the fact that he has two of the best of all time in his corner – trainer Shug McGaughey and jockey John Velazquez. They’ve visited the Travers winner’s circle a combined four times, with Velazquez winning aboard Flower Alley in 2005 and McGaughey scoring with Easy Goer (1989), Rhythm (1990) and Coronado’s Quest (1998).

I do question (1) whether CODE OF HONOR will have enough pace close into and (2) whether or not he’s truly a 1 1/4-mile, two-turn horse. On the bright side, assuming he gets a fair pace to run at, he may only need to run the last 3/8-mile of the race.

Underneath CODE OF HONOR I’m going to focus on three horses. TACITUS (5/2) is a logical Travers favorite but he’s the type of horse that always comes with an excuse in hand. Too far back in the Derby. Too wide a trip in the Belmont. Bad start in the Jim Dandy. At some point, you just have to stop betting horses like that to win and use them underneath…at least until they prove otherwise.

OWENDALE (6/1) has yet to prove himself at this level but his resume does feature a pair of G3 wins in the Lexington at Keeneland and the Ohio Derby at Thistledown. He was a close-up third in the G1 Preakness and his inside post should ensure he doesn’t lose much ground around the oval.

LOOKING AT BIKINIS (10/1) was the beaten favorite on a muddy track in the Curlin Stakes here at Saratoga on July 26 but any number of factors could’ve beaten him that day. Perhaps it was the muddy sealed track or maybe it was the fact that it was his first try around two turns. One thing is for certain – Javier Castellano is the most prolific jockey in Travers history, with six wins in 11 starts and a lifetime ROI of $10.61. The fact that he’s aboard this horse isn’t lost on me.

Sign Up for an Xpressbet online account to Bet the Travers and get a $500, $100 or $20 New Customer Welcome Bonus!