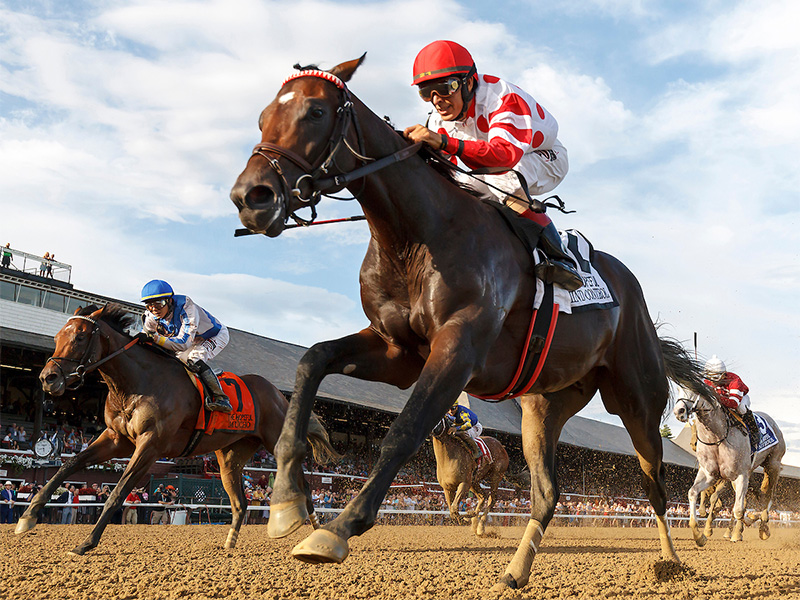 Forecast: Malthael has encountered two recent brutal trips in races he could have won with better racing luck. Perhaps today will be his day. The C. Clement-trained gelding retains J. Rosario and will leave from the far outside post, not always the place to be in these turf routers but at least guaranteeing an in-the-clear trip. After being blocked or shut off at critical stages in his last pair, the son of Noble Mission has a chance to commence his rally wide and show what he can do with a clear journey. Doswell was nosed out in the same race that Malthael just finished third in. The Giant’s Causeway gelding is a major contender again, and we’ll certainly use him in our rolling exotics, but his morning line of 7/5 seems a bit short compared to the 4-1 listed for our top pick.

Forecast: Mo Didley, a $40,000 J. Sharp claim in late July, returns well below that price, never a good sign, but the with the addition of blinkers the son of Uncle Mo is strictly the one to beat, especially over a sloppy track that he’s proven he can handle. If he has at least one good one left he’s home free but at a very short price that offers no wagering value. You can make him a rolling exotic single or simply pass the race.

Forecast: This race has been taken off the turf and has been shortened to seven furlongs. We’ll go three-deep in our rolling exotics but otherwise pass the race. Baffin Bay, freshened for nearly two months, is a Gulfstream Park invader that likes to win races (four-for-11), picks up. J, Rosario, and has enough tactical speed to always be within striking distance. On pure speed figures he’s fast enough to act at this level on this circuit. Seanow finished second in a similar off-the-grass sprint at this level and must be considered a threat once again. As a son of Tiznow, he should have no difficulty handling a wet track. We’ll also toss in Thousand Percent, a class dropper but still above his claim level for a good outfit.

Forecast: Ekhtibaar, a certified off-track freak, didn’t fire when 6/5 in a starter’s allowance race on grass at Laurel Park last month but returns to the main track today and a sloppy one at that. Perfect in one prior start at Saratoga and with speed figures that are good enough to win, the R. Handal-trained son of Bernardini looks like the logical top pick and a rolling exotic single..

Forecast: This race has been taken off the turf and will be run at nine furlongs. Labez is solid on numbers, exits a live race, and shouldn’t be bothered by the surface switch. The Tapit gelding has good tactical speed and rising speed figures. Snap Hook seems to be moving in the right direction numbers-wise and might find himself on the lead from his inside post. Mo Gee has never raced on anything other than turf or synthetic, but as a son of Uncle Mo should handle any surface and comes off a win in his first-off-the-claim for Robertino. A similar effort today puts him in the hunt. We’ll use these three in our rolling exotics but if you feel the need to spread deeper, go right ahead.

Forecast: Gouverneur Morris has trained like a terrific prospect both at the Fasig-Tipton March sale (where he was very impressive in the preview session before bringing $600,00) and then locally at Saratoga with a series of drills leading up to this, his racing debut. From the first crop of the terrific freshman stallion Constitution, the T. Pletcher-trained colt is listed at 8/5 on the morning line but we suspect he’ll go lower. In a race containing nothing but first time starters, this colts sticks out, so we’ll make him a strong rolling exotic single.

Forecast: This race has been taken off the turf and will be run at nine furlongs. There are at least three logical possibilities and perhaps more, so best advice is to use as many as you can afford to. We’ll triple the race and hope that’s enough. Quality Choice has numbers that fit and won an off-the-turf sloppy rack race at Belmont Park three runs back. Pipes likes an off track but after just missing in an allowance race shows up in a $30,000 claimer, not a good sign. If healthy, he should be right there. Danny California has one career win, and it came over a sloppy track.

Forecast: We’ve got this second-level allowance optional claiming sprint for fillies and mares down to two main contenders, both of which should be used in rolling exotic play. Miss Lily B is a razor sharp Finger Lakes invader seeking her sixth straight win and while not blazingly fast on speed figures still looks good enough to extend her winning streak. Primarily a six furlong sprinter but giving every indication that today’s seven furlong trip will be within her range, the daughter of Yes It’s True attracts J. Ortiz and projects to be the controlling speed. Hay Field, a $40,000 claim by J. Servis and therefore eligible to improve several lengths overnight, has been first or second in 14 of 23 career starts and seems set for another major effort after just missing at this level in an off-the-turfer last month. She’s the likely choice and strictly the one to beat.

Forecast: March to the Arch wasn’t quite up to beating Grade-1 company in the Fourstardave Handicap last month but didn’t run badly, finishing fourth, beaten three lengths, and earning a career top speed figure. This is a considerably easier group, so we’re expecting the M. Casse-trained gelding to resume his winning ways. He’s a closer in a race without much speed, but we suspect T. Gaffalione will have him relatively close when the pressure is turned out entering the lane. Olympico shortens to a middle distance after racing wide and finishing a close seventh (beaten less than two lengths) in the mini-marathon Bowling Green S.-G2 earlier this meeting. The C. Brown-trained import is another that does his best running late and with clear sailing should make an impact in the final furlong. Preference on top goes to March to the Arch but both should be included in rolling exotic play.

Forecast: This is a legitimate Grade-1 event for juveniles, a better, stronger race than unusual for this traditional season-ending stakes. Green Light Go has won both of starts like a top colt and gives every indication that he’ll continue to thrive even as the distances increase. The son of Hard Spun continues to shine in the a.m. for J. Jerkens and should be able to settle just behind the leaders before being asked to quicken from the top of the lane to the wire. Basin is a highly-promising colt and had the good fortunate of landing the comfortable outside post. After being nosed out in his debut, the son of Liam’s Map graduated with authority while improving his Beyer speed figure by 16 points and had the win franked when runner-up Three Technique came back to win yesterday like a top prospect. He’s one of three S. Asmussen-trained entrants, with R. Santana, Jr, who would probably know best since he rode all three, opting for Gozilla, a runaway winner in his debut last month while doing it in hand. The son of Flatter is a beautiful mover and is another that should handle today’s extra furlong without issue.

Forecast: Mine the Coin, first off the claim for R. Falcone, Jr. (superior 25% with a flat-bet profit), figures to step forward for his new connections and returns at the level he was claimed in this $20,000 maiden claiming sprint to wrap up the season. Though beaten as the favorite over this track and distance vs. similar when last seen in mid-July, the son of Speightstown switches to the barn’s “go-to” rider L. Saez and has previous speed figures that are more than good enough to win in this league. He’s a straight play and rolling exotic single.