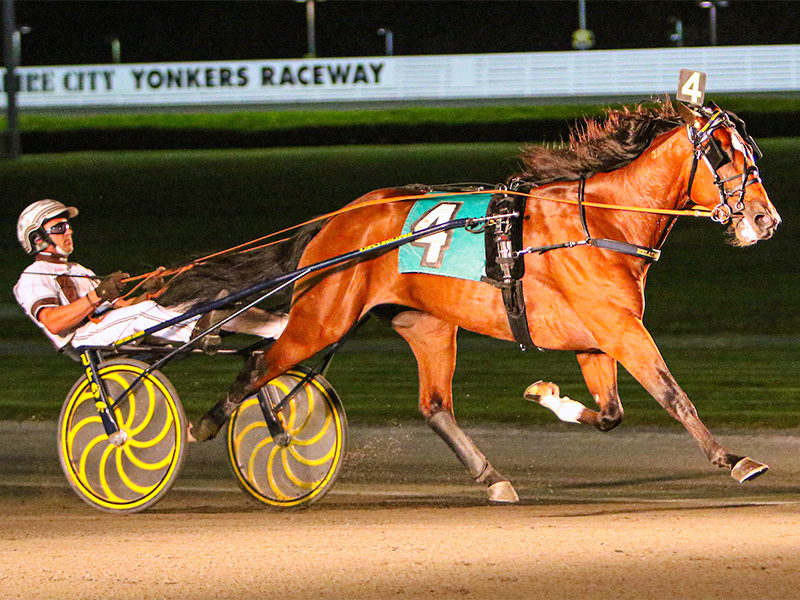 Marcus Melander summoned a fleet-footed Gimpanzee to foil the plans of a Triple Crown hopeful Saturday night at Yonkers Raceway.

Melander trains New York-bred Gimpanzee, who zipped to a track record performance in the $500,000 Yonkers Trot, the second jewel of the Trotting Triple Crown. Hambletonian winner Forbidden Trade gave futile chase but finished second, 4-1/4 lengths behind the winner in 1:53.3.

In becoming the sport’s newest millionaire, Gimpanzee also provided a measure of revenge for Melander, who sent out three strong contenders in the Hambletonian but didn’t win. Gimpanzee improved to 14-26 lifetime for owners Courant Inc. and S R F Stable and remained unbeaten in five starts at the half-mile oval where he was crowned New York Sire Stakes champion.

“This is an amazing race to win and I don’t think there is a better 3-year-old on a half-mile track,” said Melander. “I think he showed it tonight.”

The betting public believed, making Gimpanzee the 1-to-5 favorite. Hall of Fame driver Brian Sears handled the rest, sending Gimpanzee to a clear lead through fractions of :28 for the opening quarter, :56.4 for the half and 1:25 for three quarters. He won geared down and paid $2.60 to win.

Forbidden Trade (Bob McClure) was compromised when three rivals in the eight-horse field went off stride in front of him. He tried to make a run approaching the far turn but couldn’t get close to Gimpanzee, who accelerated on the final turn. Soul Strong (Dexter Dunn), who was in front of Forbidden Trade before he broke stride early, recovered strongly to finish third, just in front of 199-1 shot No Drama Please (Jason Bartlett).

“All the credit to Marcus and his outfit,” said Sears. “He’s been a total pro from the first time I sat behind him, just so mature and he was ready tonight.”

Gimpanzee wasn’t the only state-bred to shine on the Triple Crown stage. In the next race, American Mercury (Tyler Buter, $16.20) shocked 1-to-9 favorite Bettor’s Wish in the $500,000 Messenger Stakes for sophomore pacers.

Bettor’s Wish (Dexter Dunn) controlled the pace through a 1:23.3 third-quarter split and led by one length turning for home. American Mercury, who established pocket position early, sat poised to make a run after first-over U S Captain (Bartlett) pressed Bettor’s Wish on the final turn but faded to finish third.

Buter’s decision to pull from the pocket or hope for a rail opening was made easy when Bettor’s Wish drifted on the lead. American Mercury, the 7-to-1 second favorite, slipped through on the inside and won the stretch duel by a head in 1:51.3. The exacta paid $22.

“He was super sharp coming into the race,” said Buter. “He definitely came through tonight and showed everybody what he can do.”