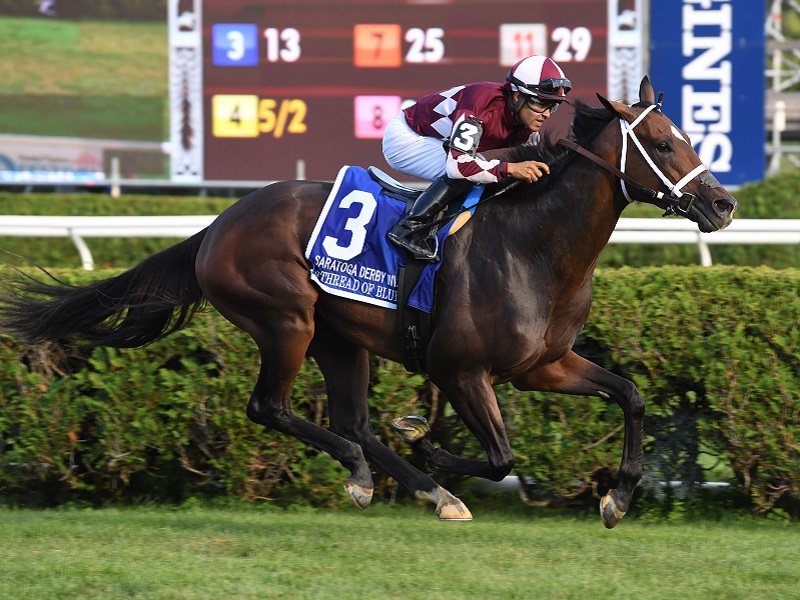 On the Derby side, the winners of both the Belmont Derby (Henley’s Joy) and Saratoga Derby (A Thread of Blue) are back, while the Oaks is missing expected favorite, Concrete Rose, due to injury.  No harm, no foul.  They run the race anyway and her absence makes for a better betting race.

Both races, along with the Grand Prix, are included in an enticing Late Pick 4, which begins with Race 8 at 4:43PM ET.  Xpressbet customers that hit the Late Pick 4 will Split 1 Million XB Rewards Points – register for free to play in that promotion.

For the sake of full disclosure, my ticket for last Saturday’s Saratoga Late Pick 4 performed less than stellar.  I went six-deep to get a favorite in the opening leg and I whiffed in both the Glens Falls (Mrs. Sippy) and Woodward (Preservationist).  Sometimes the game breaks that way, but hoping to get back on the ‘right’ side of things this weekend.

The inaugural edition of the Grand Prix American Jockey Club Invitational attracted a field of eight unreliable older horses.  I say unreliable because this group is a combined 6-for-38 on the year and half of the field is looking for its first victory of the year.  Furthermore, MARCONI’s 3-for-6 record in 2019 accounts for half of the entire field’s wins this year.  Such parity makes it tough to hold a strong opinion here, especially with four of these (MARCONI, ROCKETRY, YOU’RE TO BLAME, REALM) having competed in the G2 Brooklyn in June…and those four horses finished within a length of one another that day.

HIGHLAND SKY is a ‘new shooter’ in that he’s new to dirt racing, but not to the New York circuit.  He cut his teeth on the lawn and even placed in a few graded stakes races, but he turned heads when he won the off-turf John’s Call Stakes at Saratoga by 8-lengths.  The Beyer came back decent (88) and pretty much on par with the rest of this bunch.  MARCONI and ROCKETRY were dusted by King Zachary at Saratoga in the Birdstone Stakes (beaten 8 and 10 lengths, respectively) but they’re still the class of this group.

First and foremost, we have to acknowledge how much the injury to Concrete Rose hurts this race and wish her all the best in her recovery.  Looking forward to seeing her race in 2020.  She would have been 2/5 against this field and, in all likelihood, would’ve won for fun.

My initial instinct with this race was to just punch the ALL button and move on with it.  The ‘class’ of the group, if you want to call her that, is California shipper LADY PRANCEALOT.  She’s a nice filly but far from unbeatable and consider she was 15/1 when she finished third behind Chad Brown’s Cambier Parc in the G1 Del Mar Oaks.  But if not LADY PRANCELOT, then who?

The next logical considerations are a pair of French invaders, EDISA and WONDERMENT, and a UK shipper, LOVE SO DEEP.  All are logical on their best days.  WONDERMENT was a rare filly winner of the G1 Criterium de Saint Cloud last fall but she’s had trouble regaining her top form this year.  EDISA has finished first or second in her last four races and LOVE SO DEEP has run much better in her last two starts.

I loved ART OF ALMOST’s race two back in the G2 Dance Smartly at Woodbine where she stayed on well to finish just 1 1/2-lengths behind Holy Helena and Starship Jubilee – two very talented older runners.  She was too far back in the G3 Pucker Up last out at Arlington and should have a better trip this time.

The other American runners – ROMANTIC PURSUIT, DESERT RIDE and DYNA PASSER – don’t strike me as horses I need to have on my ticket.  Famous last words.

The adage would indicate that last time was ‘the time’ to have A THREAD OF BLUE, who took the Saratoga Derby field gate-to-wire at odds of 13/1 on August 4.    He was ‘lone speed’ that day and I guess the question I have is a simple one…is he lone speed again here?

European horses notwithstanding, it sure looks like it.  That said, I do expect HENLEY’S JOY to sit closer to the pace this time around – he was too far behind in the Saratoga Derby – and TONE BROKE, who won 2/3 of the Canadian Triple Crown, employs a stalking style.

The only horse I want to use, besides A THREAD OF BLUE, is DIGITAL AGE.  The Chad Brown-trained horse nearly ran down A THREAD OF BLUE in the Belmont Derby despite rather pedestrian fractions.  As a deep closer he’ll always be pace dependent and I’m not sure this distance is his forte as his winning efforts all came at 1 1/16-miles or shorter.

The nightcap is an OK race for NY-bred maidens and, depending on how you look at it, you have the opportunity to bet a horse that has already won a race as CHAMPAGNE CHILLS was DQd from first in a maiden race at Saratoga on July 26.  The DQ was, in my opinion, justified.  That said, you have to like the fact that the horse had a nose for the wire that day and, on class alone, he’s taking a drop.  Granted he’s not racing in an off-the-turf race like he was that day, but his A game wouldn’t be needed to beat these.

LEGION STORM looks like a horse that could finally be sitting on a win, but he’ll need someone to pressure CHAMPAGNE CHILLS up front.  He just doesn’t finish strong, as his 0-for-13 record indicates.  I have no idea what to make of FREUDIAN SIP, who drops in class, changes barns and adds blinkers for Jorge Abreu.  I’m hesitant to back a horse that’s changing so much, but he gets an excellent Belmont jockey in Junior Alvarado and he could beat a number of these based on the matriculation of the class drop alone.

Other than that, it’s just hard to back some of these horses.  CLONEDSIMMARD is 0-for-26, AWESOME ADVERSARY is 0-for-17, BLESSED HONOUR is 0-for-21 and RIDOLFO is 0-for-17.  It’s just unlikely that this Saturday would be ‘their’ day.