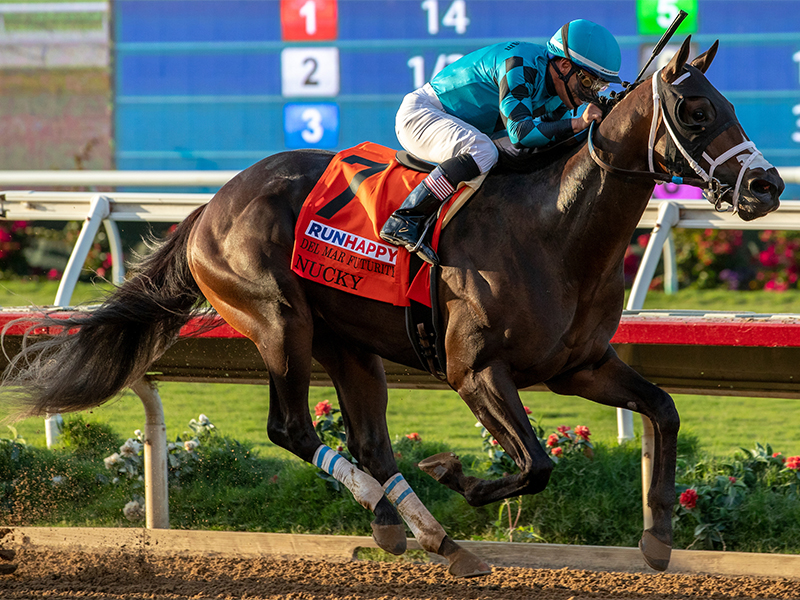 No trainer has dominated any of this country’s current Grade I races as much as Bob Baffert’s 14 victories in the Del Mar Futurity.

According to my research, the next most wins by a trainer in any of this country’s current Grade I races is nine. D. Wayne Lukas has won the Del Mar Debutante and Chandelier Stakes (formerly the Oak Leaf Stakes) nine times. The late, great Charlie Whittingham likewise won the Santa Anita Handicap nine times.

Last Monday it looked like Baffert probably would get his 15th Del Mar Futurity victory, as reflected by the final odds. The Baffert-trained Eight Rings was pounded down to 1-2 favoritism. Garth, who also resides in the Baffert barn, was the only other horse lower than 9-1. Garth was 4-1. Wrecking Crew, trained by Peter Miller, was 9-1. Everyone else in the field of eight was 12-1 or higher.

Not only did it appear likely that Baffert would get yet another win in the seven-furlong Del Mar Futurity, many felt that he had a good chance to finish one-two. But a bizarre incident early in the race eliminated any possibility of a Baffert exacta.

Just before going a furlong, Eight Rings suddenly ducked in sharply, unseating jockey Drayden Van Dyke. When Eight Rings ducked in, it appeared that he collided with 14-1 Storm the Court, who dislodged jockey Flavian Prat. According to the official Equibase race chart, Storm the Court “was bumped hard before the three-quarter pole and lost the rider.”

After the two riders were unseated, while Garth was showing zip to vie for the advantage in the run down the backstretch, it looked like maybe he would be the one this year to get Baffert another Del Mar Futurity victory. But midway on the far turn, Garth threw in the towel. He faltered badly and eventually finished sixth, almost 30 lengths behind the winner. The highly regarded Garth posted a Beyer Speed Figure of just 12. When is the last time you saw a Baffert trainee get a Beyer like that? The way he retreated, it’s reasonable to think something just wasn’t right with Garth on this day.

And so, as the field was turning into the stretch, the Baffert duo now was gone. With the Baffert duo either out of the race or out of contention, who would be able to capitalize on that and win the race?

Coming into the stretch, 18-1 Ginobili (on the inside) and Nucky (on the outside) were battling head-and-head for the lead, about 1 1/2 lengths clear of Wrecking Crew. Ginobili and Nucky appeared to bump a couple of times coming into the lane before Nucky put away Ginobili leaving the eighth pole.

The Equibase race chart states that “the stewards conducted an inquiry into the incident in the chute before ruling no other runner was responsible for the bumping and lost riders.”

Richard Baltas, the trainer of Ginobili, lodged an objection against Nucky for alleged interference in upper stretch. The race chart states that the stewards disallowed the claim of foul when ruling that the contact between Nucky and Ginobili “did not alter the original order of finish.”

After they unseated their jockeys, Eight Rings and Storm the Court both ran on. Storm the Court was corralled by an outrider at the head of the stretch. Eight Rings, though admittedly he was not carrying any weight, closed with a rush down the lane and, past the finish line, galloped out far in front.

Prat walked away from the accident on his own power, then rode in -- and won -- the next race, which was the final race of the Del Mar summer meeting. Prat’s 42 victories topped the final jockey standings for the meet, 10 wins more than runner-up Van Dyke.

Van Dyke was taken to nearby Scripps La Jolla hospital after Monday’s accident. He was released Tuesday.

Daily Racing Form’s Jay Privman reported that Brad Pegram, Van Dyke’s agent, said that while X-rays were negative, the rider did need stitches to close cuts around an eye and on an arm, but otherwise was fine.

This was Nucky’s fourth race. He had the most experience of all starters in this year’s Del Mar Futurity. The Kentucky-bred son of 2004 Horse of the Year Ghostzapper paid $72 for each $2 win ticket. In 72 editions of the Del Mar Futurity, the highest win payout occurred when Go West Young Man returned $144.80 in 1977.

While Baffert did not finish one-two in this year’s Del Mar Futurity, it did turn out to be a Peter Miller exacta, paying $202.40 for a buck. It was Miller’s first win in this race.

Norberto Arroyo Jr. piloted Nucky to his Del Mar Futurity triumph. That’s the same rider who early in the Del Mar meet made news for his unusual attire when he showed up at the stewards’ office on the morning of July 19.

According to the report of the stewards to the California Horse Racing Board, Arroyo appeared in the stewards’ office “wearing only two towels.” He “was sent back to the jockeys’ room in order to change into something just a bit more proper.”

When Arroyo was posing for pictures on Nucky in the winner’s circle after the Del Mar Futurity, he was wearing the turquoise silks of owner Gary Hartunian (Rockingham Ranch). Hartunian not only races Nucky, he owns Wrecking Crew in partnership with David Bernsen.

Thank goodness Arroyo did not decide to show up in the winner’s circle on Nucky wearing just two towels.

Nucky’s final time of 1:25.52 was the slowest in the Del Mar Futurity since it was shortened to seven furlongs from one mile in 1993. That 1:25.52 clocking was considerably slower than Bast’s final time of 1:23.73 when she won the Grade I Del Mar Debutante for 2-year-old fillies at the same seven-furlong distance last Sunday by 8 3/4 lengths.

Below are the final times for the Del Mar Futurity going back to 1993:

Not surprisingly, in light of the slow final time, Nucky recorded a weak 68 Beyer Speed Figure, down 10 from the 78 he was credited with when he won a six-furlong maiden $100,000 claiming race by 10 1/2 lengths at Del Mar on Aug. 21 in his California debut. Nucky lost three times in Kentucky (twice at Churchill Downs, once at Ellis Park) prior to being shipped to the Golden State.

Eight Rings had recorded a 94 Beyer Speed Figure when he won a 5 1/2-furlong maiden special weight race at first asking by 6 1/4 lengths on Aug. 4 at Del Mar. That performance subsequently was flattered when the runner-up in that Aug. 4 race, Express Train, won a maiden special race weight by 14 1/4 lengths at one mile on Aug. 28 at Del Mar.

Considering Nucky’s low 68 Beyer, plus the way Eight Rings closed with such gusto in the stretch, it’s hard not to conclude that Eight Rings not only likely would have won the Del Mar Futurity if he had not unseated his rider, he probably would have won by a big margin.

Below are the Beyer Speed Figures for winners of the Del Mar Futurity going back to 1991:

There have been very few claims in the history of the sport that have turned out as well as Vasilika, the 5-year-old mare who surged late to eke out a nose victory in last Saturday’s Grade II John C. Mabee Stakes on Del Mar’s grass course.

Vasilika was sent off as the even-money favorite in the 1 1/8-mile Mabee. She was coming off a half-length loss when third behind Beau Recall and Storm the Hill in Del Mar’s Grade II Yellow Ribbon Handicap on the turf Aug. 3.

Hall of Fame trainer Jerry Hollendorfer owns Vasilika in partnership with All Schlaich Stables, Gatto Racing and George Todaro. They claimed the Kentucky-bred daughter of Skipshot at Santa Anita on Feb. 11, 2018.

The Mabee was Vasilika’s 18th career victory. That matches the number of career wins by her paternal grandsire, Skip Away, who was voted the 1998 Horse of the Year.

While grass standout Bricks and Mortar maintains the top spot in the NTRA Top Thoroughbred Poll, Catalina Cruiser entered the Top 10 this week.

Trained by John Sadler, Catalina Cruiser is three for three this year, all in Grade II events. The 5-year-old Kentucky-bred son of Union Rags won the True North Stakes at Belmont Park on June 7, San Diego Handicap at Del Mar on July 20 and Pat O’Brien Stakes at Del Mar on Aug. 24.

Catalina Cruiser has won seven of eight lifetime starts. His lone defeat came when he finished sixth as the 4-5 favorite in the Grade I Breeders’ Cup Dirt Mile at Churchill Downs last year.