It's single time with Stormy Embrace in Gulfstream Pick 4 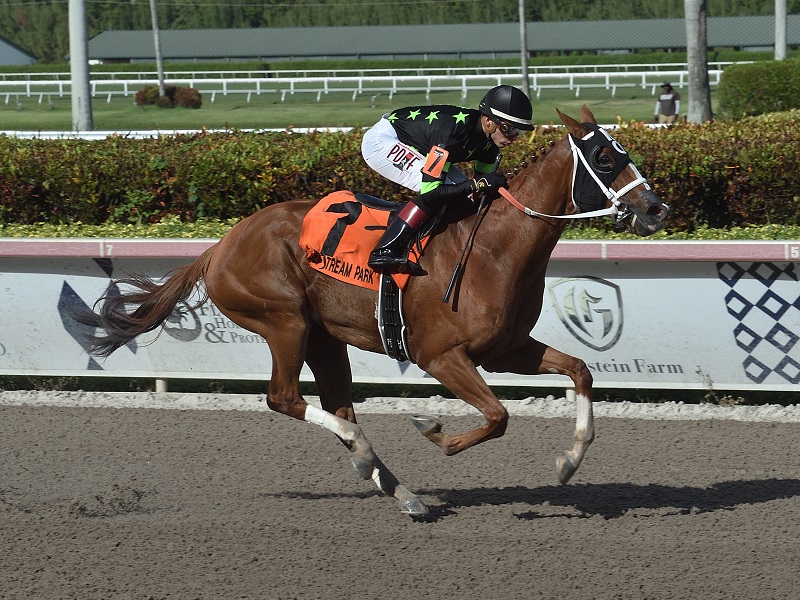 Stormy Embrace makes it back to the races Saturday in the $100,000 Sheer Drama Stakes and makes the late Pick 4 really a Pick 3 when you get right down to it.

If you were ever queasy about use a single in a multi-race play, this could be your chance to get over it. Stormy Embrace will probably be around a dime-to-a-dollar straight win proposition. When you have such a prohibitive favorite in a Pick 4, you need to shop around for potential upsetters in the other races. Or you can unload on all favorites, and the only way you can make that worth your while to have to have it many, many times. Or you can try to beat the 1-9 or 1-5 standout. Not being one to play a $100 Pick 4, or a straight pick four of any denomination, I prefer the usual approach using 50-cent increments. And there are possibilities. The first and last legs of the Pick 4 are for maidens, and there are many with a chance in each of those. The strategy this week is 4x3x1x4 for $24.

Stormy Embrace is front and center, as usual, and today she faces Florida-breds at seven furlongs. She’s won nine of 25 attempts and was third in this race a year ago. Trainer Kathleen O’Connell used that race as a prep for the Breeders’ Cup Filly and Mare Sprint, a race in which she finished 11th. Owner-breeder Matalona Thoroughbreds has seen the 5-year-old Circular Quay mare come off that loss in mighty fine order. She’s won two of three this year, including a 10-length win over state-breds in the Musical Romance Stakes and most recently ran to a two-length score in the Grade 2 Princess Rooney Stakes.

This year’s Sheer Drama is likely to have a better outcome for Stormy Embrace. In the 2018 edition, she broke a step slower than usual and had to fight her way through traffic to finish third. She gets the rail, should get a good break and can show her best from the beginning.

The Pick 4 opens in the 9th with maiden-claimers, and while Michigan Sunset is short on the morning line, this doesn’t look like a gimme and it might be the best opportunity to throw a wrench into Pick 4 activities. Moon Pistol, Guess First and Channeledbythewind either have promise or have shown some run thus far.

Like the 9th race, the 12th is full of the inexperienced and four horses that look worthy of a spot on the Pick 4 ticket are Domineer, Elusive Molly, Song River and Norma’s Love.