A Stroll in the Parx 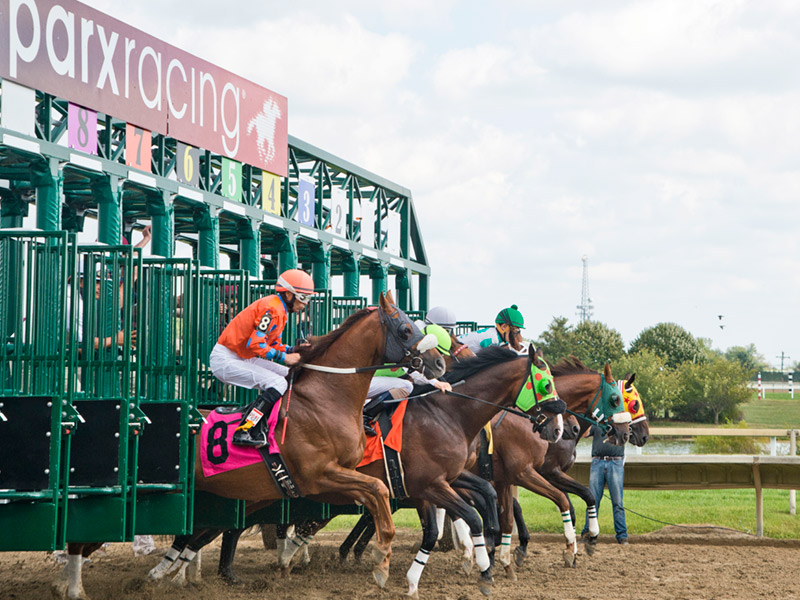 Yours truly will visit Parx Saturday for a fun-filled afternoon at the races. It’s a short drive—about 45 minutes east on the PA Turnpike—but a special one because it will be Pennsylvania Derby Day, a golden opportunity to meet with out of town friends, acquaintances and to enjoy some outstanding racing in my own backyard.

In the early 70’s, as a high school student, I remember a double date with a pal and his girl for the races at Liberty Bell, then Philly’s only harness and thoroughbred track. Dropped off home at around midnight, I noticed that my car wasn’t where I had parked it. Turns out it was stolen. To this day, that remains my biggest losing day at the track.

A few years later, Keystone Race Track (now named Parx Casino and Racing) was built. I remember visiting one afternoon with my uncle. He told me to stay where I was, and I watched as he went near the paddock and whispered with another man. I don’t recall any particulars like names or numbers or loud rooting, but I clearly remember my uncle returning from the cashier’s window with a palm-full of cash.

After that, I returned to Keystone often. How could I not? They were giving out wads of money! About a decade later, they changed the name of the track from Keystone to Philadelphia Park, but that didn’t help a young, budding horseplayer to collect one of those wads. Never happened.

A few years later, as I worked the Southern California racing circuit in a variety of positions, back home Greenwood Racing, Inc. purchased Philly Park. They welcomed full-card simulcasting and erected six off-track locations called Turf Clubs. About 10 years ago, they changed the name of the track to Parx to reflect a more glamorous and exciting vibe connected to the melodic sounds of slot machines.

After a 30-year hiatus, in 2004, I moved back to the Philly area just in time to experience locally-based Smarty Jones’ amazing assault on the Triple Crown. I was there along with around 10,000 others one Saturday morning between the Preakness and Belmont when trainer John Servis, on horseback clad in a red and white Philadelphia Flyers jersey, ponied Smarty out for a celebratory gallop around the track. Unfortunately, the Flyers quickly were ousted from the playoffs and Smarty faded in the Belmont stretch, but the colt’s immense popularity proved critical to the passing of legislation that legalized slot machines at state race tracks.

Amazingly, according to Wikipedia, “Horse Racing was the first type of gambling to be legalized in Pennsylvania, having been legal since the passing of the Race Horse Industry Reform Act in 1959. The first race track to open after the passage of that act was Meadows Racetrack (home of Xpressbet in Washington, PA) in 1963.”

Liberty Bell, in Philly, also opened in ’63. Apparently, however, they were racing horses in The City of Brotherly Love way before then. Race Street, a major east-west Philly artery was one of William Penn’s original gridded streets from the 1680s and named Sassafras Street. Again, from Wikipedia, “The name ‘Race Street’ was originally a nickname given to the street as the street was used for horse racing in the late 1800s. The name became official some time in the mid 1850s.”

Now, the Pennsylvania Derby isn’t nearly as glamorous as the 3-year-old shindig they host in Kentucky each year, and it certainly doesn’t attract as many high-profile runners as the Santa Anita or Gulfstream versions, but it usually draws a star or two, mostly lured by a $1 million purse. This year, the race originally promised an appearance by original Kentucky Derby winner Maximum Security. However, Monday he suffered a severe tummy ache, visited the emergency room and probably won’t be seen in the afternoon for the rest of this year. Forget Mylanta. Pass on Pepto. Skip Tums. Reject Rolaids. Instead, call a vet. Immediately. To a horse, an upset stomach can prove deadly. Thankfully, Maximum Security will be OK…even avoided the surgeon’s knife. He just can’t race for a while. And for a racehorse that’s got to be depressing--like a bird that’s been grounded or a fish forced out of water.

Not suffering more than he did can be counted as a break for a horse that hasn’t had many in a short career. First time out in a Gulfstream Park maiden race, Maximum Security was underestimated, ignored and offered for sale at the discount-bin, bottom-of-the-barrel price of $16k. Worse than that, no one claimed him! He won that race and the next two before romping in the Florida Derby.

Of course, he still got the Rodney Dangerfield treatment from some—no respect. Critics said he had made an easy lead in the race on a conveyer-belt track. It would be different in Kentucky, they predicted. It wasn’t. He went to the front and kept going. Unfortunately, he also went sideways for a few strides. That’s when his troubles began. After the race, opponents pointed fingers and waved hands. ‘Teacher, teacher,’ they cried, ‘Maximum hit me!’ Stewards agreed, confiscated his blanket of roses, and banished jockey Luis Saez to ‘timeout’ in a corner.

In his next start at Monmouth Park, he failed as the prohibitive favorite and detractors unleashed a flurry of ‘I told you sos’ and it seemed as if they were right. Then Maximum Security won the Haskell Stakes over a game Mucho Gusto and he was back atop of the sophomore heap where he belonged. Saratoga’s Travers was next on the schedule, offering a golden opportunity to silence detractors once and for all. Unfortunately, the colt never made it to upstate New York. Trainer Jason Servis didn’t like how he was training, so he cancelled all Spa reservations and instead announced the PA Derby as the new target.

Maximum Security’s PA Derby defection leaves Improbable as the probable (see what we did there?) favorite. He’s trained by Bob Baffert, ridden by Mike Smith and winner of four of eight starts, including an impressive score in the Shared Belief last out at Del Mar. He’s best from just off the pace and was unbeaten in three starts before missing by a neck to Long Range Toddy in the Rebel Stakes. Blinkers were added next out in the Arkansas Derby and he finished a length behind highly-regarded Omaha Beach. What many forget is that Improbable was the lukewarm Kentucky Derby favorite at 4-1 and that he finished a mere three and one-quarter lengths behind original winner Maximum Security.

Preakness winner War of Will demands support, but he was disappointing in the Belmont and in the Jim Dandy last out. He needs to bounce back to top form in here. He has bullets in three out of four works for this—two at Saratoga and two at Belmont. Since August 25th, he’s outworked all 140 horses that breezed identical distances at the same tracks on the same days! That’s got to count for something. What’s most important for War of Will is that he relax. Like the rest of us, that’s when he’s at his best. Unfortunately, it’s rare when he doesn’t argue with jockey Tyler Gaffalione early in the race. That behavior, if repeated Saturday, will spell doom.

Mr. Money is most interesting. Fresh off a Churchill maiden route score he was a well-beaten fourth in the 2018 BC Juvenile. At three, two Grade 2 Fair Grounds stakes starts—Risen Star and Louisiana Derby, respectively—went poorly. He cut back to a one-turn mile in the Grade 3 Pat Day Mile and won for fun. He returned in the Grade 3 Matt Winn and romped again. He then added two Grade 3 derbies to his resume—Indiana and West Virginia, respectively—both with clear winning margins. No question, he’s the ‘now’ horse. Since August 3, trainer Brett Calhoun has given him three works at Churchill and they’re all bullets—better than a total of 83 others working there on identical days at the same distances. Need more convincing? Hunch players will lean on the fact that Edward Joseph Mahoney, rock singer and songwriter better known as Eddie Money, recently passed on Sept. 13.

Local talent Spun to Run battled to a hard-fought game victory over Grey Magician in the Grade 3 Smarty Jones at Parx earlier this month. That was his third win in five Parx tries with one second and produced an all-time high Beyer Speed Figure. It would be a surprise if he could repeat that effort Saturday, but he loves the track and trainer Juan Carlos Guerrero wins at a 22% clip.

Math Wizard has the rail and will be hoping for a pace meltdown. He’s tried Grade 3 company in his last three races—Ohio, Indiana, West Virginia Derbies, respectively--with a close second to Owendale and a distant third to Mr. Money among those finishes. Last out, ‘Wizard delivered a dull effort behind Mr. Money in the West Virginia Derby. Astutely claimed for $25k at Gulfstream in January by trainer Joseph Saffie, ‘Wizard finished nearly 11 lengths behind Maximum Security in a Gulfstream $16k maiden race in December 2018. He’s won just two of 12 lifetime starts.

The Pennsylvania Derby day card includes the $1 million, Grade 1 Cotillion, one of the filly and mare division’s top events; the Grade 2, $300k Gallant Bob at six furlongs; the $150k Park Dirt Mile, and the $150k Turf Amazon sprint for fillies and mares. A pair of rich state-bred races lead up to the graded stakes bonanza. In short, this stroll in the Parx offers something for everyone—including for a guy whose been around too long to admit.