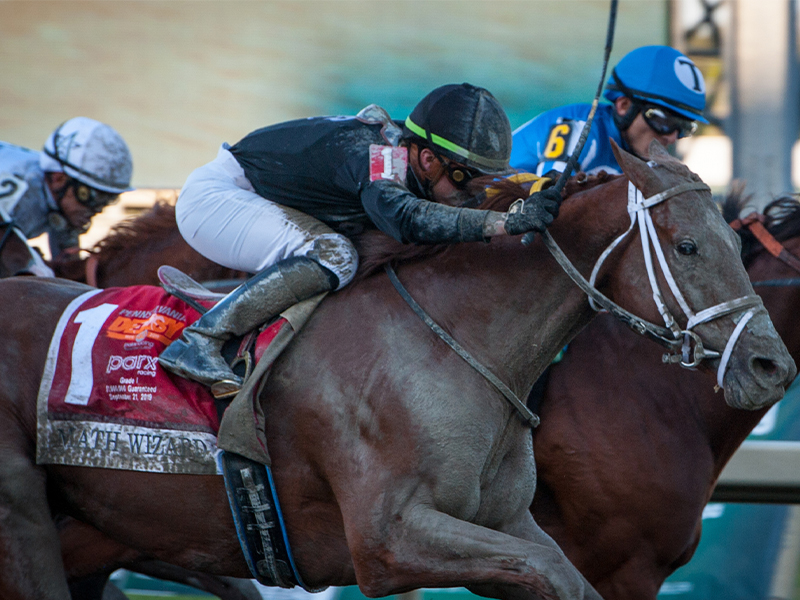 The $1 million race did lose some of its luster when it was announced earlier in the week on Tuesday that Maximum Security would be withdrawn due to a colon issue. He is best known for what happened in the Kentucky Derby when he finished first but was disqualified and placed 17th for causing interference. It was the first time in the 145-year history of the Kentucky Derby that a winner has been disqualified for an incident during the running of the race.

While Maximum Security did lose the Grade I Kentucky Derby via disqualification, he has managed to win a pair of Grade I races this year. He won the Grade I Xpressbet.com Florida Derby in March and Grade I Haskell Invitational on an extremely hot day in July.

Maximum Security no doubt would have gone off as the favorite in the 1 1/8-mile Pennsylvania Derby. But now his status in terms of racing again sometime during the remainder of 2019 is up in the air.

As for Math Wizard, Edgar Zayas originally was named to ride him in the $1 million Pennsylvania Derby, but the jockey elected to stay in Florida. Even though Math Wizard was going to be a longshot last Saturday, the Kentucky-bred Algorithms colt ended up being piloted by Ortiz, one of the top jockeys in the nation. Ortiz was voted a 2018 Eclipse Award as outstanding jockey.

Patiently handled early by Ortiz, Math Wizard was last in the field of six for a time on the backstretch. Rallying six wide into the lane, Math Wizard resolutely kept to his task and got up in the final yards to prevail by a neck.

Mr. Money, 8-5 in the wagering and ridden by Gabriel Saez, assumed the early advantage and set a slow pace. He carved out fractions of :24.50, :49.60 and 1:13.98. When Mr. Money sported a one-length lead with a furlong to go, it looked like he might well be headed to his fifth consecutive victory. But Mr. Money ultimately had to settle for second when not quite able to hold off Math Wizard.

War of Will, with regular rider Tyler Gaffalione in the saddle, finished third at 3-1. Improbable, ridden by Hall of Famer Mike Smith and backed down to 6-5 favoritism, came in fourth, a scant nose behind War of Will.

Improbable now has been defeated this year as the favorite in the Kentucky Derby, Preakness and Pennsylvania Derby. He had problems at the starting gate when he finished second in the Grade I Arkansas Derby and Preakness, but he was fine in the gate when he won the one-mile Shared Belief Stakes by nearly three lengths at Del Mar on Aug. 25. That victory was flattered when King Jack, who was no match for Improbable in the Shared Belief, won the six-furlong Gallant Bob Stakes in a scorching 1:08.89 on the Pennsylvania Derby undercard.

In light of King Jack’s impressive Gallant Bob triumph and Improbable’s good comportment in the starting gate in the Shared Belief, it came as no surprise that Improbable was sent away as the Pennsylvania Derby favorite following the defection of Maximum Security. But Improbable’s bad starting gate behavior returned last Saturday. He missed the break, which cost him dearly.

Prior to the start of the Pennsylvania Derby, Spun to Run became fractious in the gate in post 5. When that happened, Improbable seemed to react by rearing up in post 2.

I don’t think this race will be making the starter’s highlight reel, not after he hit the button when Improbable’s head was not straight. But that being said, there is no doubt that the blame for Improbable’s poor start principally rests with Improbable, who once again was not able to keep from going bonkers in the gate. Not surprisingly, Improbable’s bad gate behavior in some of his races has his Hall of Fame trainer, Bob Baffert, pulling his white hair out in frustration.

“I don’t know why he does it,” Baffert said of Improbable’s bad gate deportment in Parx Racing’s post-race quotes. “He doesn’t do it in California. Mike said he was really good and then he heard a noise and it set him off. It’s just bad luck. It’s very frustrating when you go that far [from California] and he pulls that stuff. He had been doing really well. He still ran pretty well.”

Grening wrote: “Smith said he let Improbable settle down after the poor start. He said that he could have tried to wheel him to the outside but felt he would have run off.”

According to Grening, Smith said Improbable still wasn’t giving him everything in the lane.

“If he had just run, he would have won,” Grening quoted Smith as saying.

But while Smith and those who bet on Improbable no doubt were disappointed that the colt did not have the needed punch in the stretch, it should be kept in mind that the inside lane at Parx long has had a reputation for not being the best part of the track. Through the years, horses racing next to the inside rail on that track often have seemed to be running in quicksand. There is a possibility that racing on the inside part of the track down the lane contributed to Improbable not coming home better than he did.

What did Math Wizard have in common with Street Band, the winner of the other Grade I, $1 million race last Saturday at Parx, the Cotillion Stakes? They both raced wide while rallying into the stretch and were nowhere near the inside rail in the stretch.

I think Math Wizard actually deserves extra credit for his performance for a couple of reasons. First, he raced quite wide into the stretch. Second, it is not all that easy for a horse to rally and win when the pace is slow.

But this time it was Math Wizard defeating Mr. Money, albeit narrowly.

Math Wizard’s final time was 1:50.94. He was credited with a career-best 99 Beyer Speed Figure.

A MAIDEN CLAIMING RACE FOR THE AGES

In what is believed to be the first time in the history of the sport, a maiden $16,000 claiming race has produced two Grade I winners.

It was the 10th and final race at Gulfstream Park last Dec. 20. Maximum Security, making his career debut, won the six-furlong race by almost 10 lengths. Nobody claimed him for $16,000 that day. After that, Maximum Security would never again be risked in a claiming race.

After Math Wizard graduated from the maiden ranks on Jan. 6, he won a race by 18 1/2 lengths on Jan. 30 at Gulfstream. Following that Jan. 30 race, his new home was the Saffie Joseph Jr. barn when owner John Fanelli claimed him for $25,000. Fanelli said it was a seven-way shake. That Jan. 30 race was the last time you could have claimed Math Wizard, whose current ownership partnership includes the trainer, Fanelli, Collarmele Vitelli Stables, Bassett Stables, Ioannis Zoumas and Wynwood Thoroughbreds.

While Maximum Security and Math Wizard have brought considerable attention to that maiden claiming race they ran in at Gulfstream last Dec. 20, the other nine participants subsequently have done very little.

Not counting Maximum Security and Math Wizard, the others from that Dec. 20 race have just two wins from 52 starts combined since that race. And the two wins were in maiden claiming races at Gulfstream for prices of $16,000 and $12,500.

Below is a look at what all 11 starters, in order of finish in that Dec. 20 race, have done since:

There are no newcomers in the Top 10 this week in the NTRA Top Thoroughbred Poll.

Here is the poll for this week: