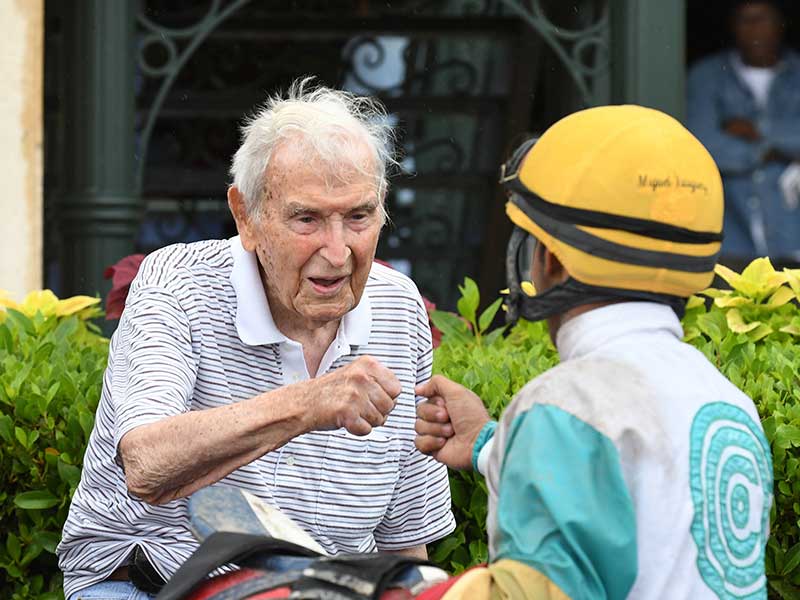 HALLANDALE BEACH, FL - Nonagenarian Jerry Bozzo became the oldest trainer in Thoroughbred history to win a race when he sent out Cotton Tooyah ($5.60) for a 4 ½-length victory in Saturday’s second race at Gulfstream Park.

Still actively training a small stable at the age of 96, Bozzo surpassed the record of the late Noble Threewitt, who visited the winner’s circle for the last time two months after celebrating his 95th birthday. Threewitt, who was born Feb. 24, 1911, was credited with being the oldest trainer to win a race when Threeatonce captured a maiden claiming race at Santa Anita on April 22, 2006.

“People say to me, ‘What the heck are you doing out there at that age, standing at the rail?’” Bozzo said. “I’m enjoying it – that’s why I’m doing it.”

The retired aeronautical engineer, industrialist and World War II vet sold his Pennsylvania bottle manufacturing company in 1969. He has been breeding and training Thoroughbreds in South Florida since the 1970s.

Ridden by Miguel Vasquez, Cotton Tooyah rallied from far off the pace to score decisively in the six-furlong maiden race for $20,000 claimers on a sloppy race.

Bozzo had already become the oldest trainer ever to saddle a stakes winner when homebred Flutterby won the Sea Lily at Gulfstream on May 30, 2015 before going on to finish second in the Princess Rooney (G2) and winning two more stakes.

Bozzo said his passion for horses has only deepened with age.