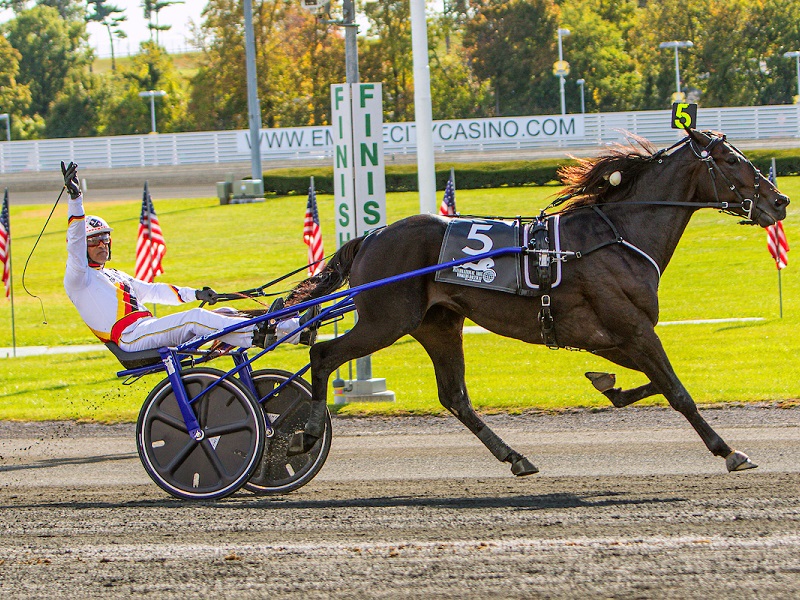 Zacon Gio never raced outside of Italy before last Saturday. He introduced himself to the rest of the world in the $1 million International Trot at Yonkers Raceway.

Zacon Gio demolished nine rivals in the 1-1/4-mile test, winning by 3-1/4 lengths in 2:24.1. But the large and boisterous Italian contingent had to hold its breath until an inquiry against Zacon Gio for possible interference came back clean.

“He has been good over (half-mile) tracks, setting records,” said winning driver Roberto Vecchione. “He never gets tired, except at the end today.”

Word traveled fast about the 4-year-old, who arrived with a 20-for-29 record and a perfect slate in eight starts this year. He was bet down from an 8-1 morning line to 6-5 favoritism.

The trip around Yonkers’ tight turns worked out favorably, too. U.S. hopeful Atlanta (Yannick Gingras), the 2018 Hambletonian winner, took the early lead, followed by Denmark’s Slide So Easy (Ake Svanstedt) in the pocket and Switzerland’s Uza Josselyn (Erik Adielsson) pressing soft fractions of :59 for the opening half mile and 1:28 to the ¾ mark.

“I was happy when I saw Uza Josselyn didn’t make the lead, because I could race behind her,” Vecchione said through a translator.

Zacon Gio tipped around Uza Josselyn on the final turn, forcing Guardian Angel AS to go wider and triggering the inquiry that took the judges several minutes to review. Atlanta wilted in the stretch and Zacon Gio surged past to win going away. He paid $4.30 to win.

“I knew at the three-quarters, when I tapped her to go, I was in trouble,” Gingras said of Atlanta.