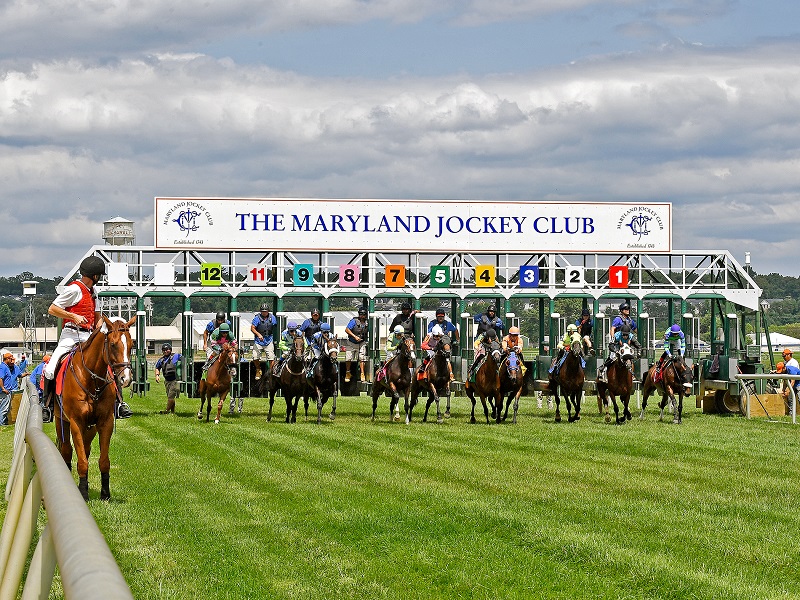 It’s Maryland Million Saturday at Laurel Park and with more than $1 million in purses, this is a great afternoon to watch and bet the races.

Among the horses entered at this year’s Maryland Million are defending ‘Classic winner Saratoga Bob, Sprint standouts Call Paul, Laki and Lewisfield and ultra-reliable mares Anna’s Bandit and My Sistersledge.

And Laurel’s top-notch wager menu makes it easy to maximize your return when you bet them.  Here are some of the highlights:

On the promo front, it’s literally going to pay to play Laurel this Saturday.  We’re giving all customers that register for this promotion a $5 Bonus for every $50 they bet on the card.  So if you bet $500 on the Maryland Million card, you get $50!  Show wagering is excluded from this promotion, but everything else is far game.

And without further ado, here are the five horses I can’t wait to bet on Saturday.

Let’s take a shot in the first race, a completely paceless (on paper) handicap where #9 EYE OF THE WILDCAT gets in light (he’s receiving a 10lb weight allowance from favored #10 SHIFRA MAGICIAN) and Julian Pimentel could have theft on his mind as he sets out to, in my eyes, take this field gate-to-wire.  If nothing else, that’s the trip I want for him.  He’s been decent in a pair of turf claiming races at Laurel in September and most of the favorites are deep closers that would have trouble catching this one if he shook loose.  It’s a bit of a stretch, but why not take a shot?

Scott Lake is one of the premier trainers in the Mid-Atlantic and when he claims a horse it’s generally safe to assume that horse is going to take a few strides forward.  He snatched up #3 EASY RIVER FOR $7,500 earlier this month at Parx and looks to get him back to the form that he was in earlier this year when in Lake’s care (he was claimed from Lake in early-September).

Betting favorites isn’t sexy but it can be rewarding if you do it right.  MY SISTERSLEDGE (7/5) is a two-time winner of this race, is 6-for-11 at Laurel and is a perfect 3-for-3 at the distance.  She beat #6 GHOUL’S NIGHT OUT (9/5) two back in the All Brandy Stakes here on August 17 and I expect a similar outcome this time around.  Other than those two there isn’t much to this field, so you should be able to play accordingly.

This is one of the best value races on the card with 14 horses expected to run and a favorite - #12 TAXABLE GOODS (4/1) – stuck to the outside.  This edition isn’t like past runnings of the Turf, as Talk Show Man, Phlash Phelps, Roadhog and Pocket Patch were all reliable two-time winners since 2010.  I love the way STREET COPPER drew and I think he’s going to get a nice, ground-saving trip from just in behind the pacesetter(s).  #8 CANNON’S ROAR has developed into a nice turf sprinter but not sure he wants to run this far.

With would-be favorites #12 CORDMAKER, #13 TOP LINE GROWTH and #14 BONUS POINTS stuck on the outside looking in (they’re Maryland-bred but not Maryland-sired, which impacts their eligibility) this race is wide open, especially if nobody in the heart of the field scratches.  If horses defect, a runner like CORDMAKER would be extremely dangerous.  My top pick is #11 TORCH OF TRUTH (6/1).  He drew miserably but (perhaps against better judgment) I’ll stick with him.  If Trevor McCarthy can work out a trip, he’s got the right tactical speed to get the job done.  Defending champ #1 SARATOGA FORM (9/2) is in OK form and his draw should help him out a lot.  #4 CLUBMAN (2/1) hasn’t traditionally performed at this distance but he is a talented animal.