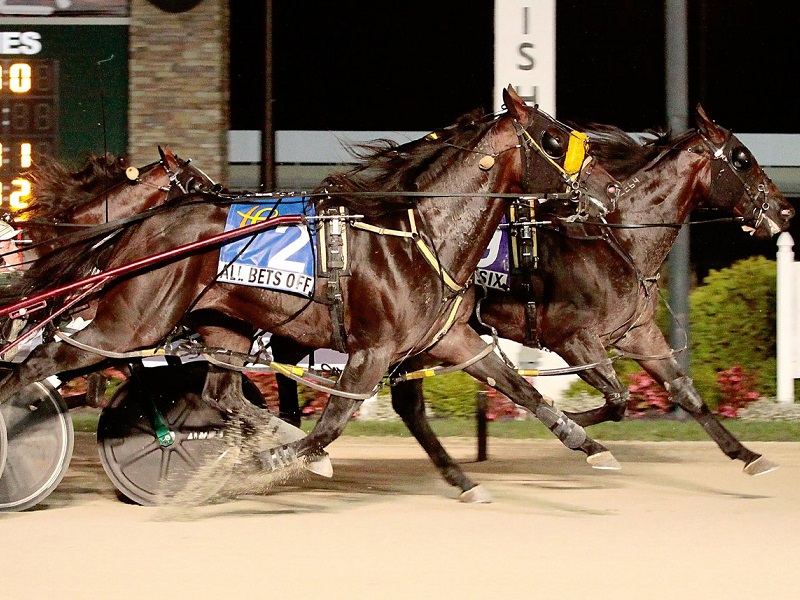 Check Six has emerged as the "now" horse among older pacers in North America. He earned a couple six-figure checks this month to prove it.

First he sprung a 17-1 upset in the $224,400 Sam McKee Memorial on Hambletonian Day at the Meadowlands. Then he took his show on the road and won in the $325,000 Dan Patch Stakes at Hoosier Park last Friday.

He overcame two major Dan Patch obstacles -- the post 9 starting spot and pace-controlling stablemate All Bets Off -- with an aggressive and well-timed drive by Yannick Gingras. Check Six blasted off the gate and to the lead through a fast, 26-second quarter mile. All Bets Off (Matt Kakaley), a $2.4 million earner, brushed to the front and shrugged off a first-over bid by Dealt A Winner to reach the 3/4-mile mark in 1:21.3, while Check Six sat patient in the pocket.

All Bets Off shook clear briefly at the top of the stretch, but Check Six wouldn't go away, ultimately ducking inside the winner and prevailing after a stirring battle by a half-length in 1:48.1. Rock N' Roll World (John De Long) closed strongly on the rail for third while favorite McWicked loomed boldly but faded in the drive.

"I was not thrilled when I saw the draw sheet and we were in post nine," said Gingras. "But you have to go out there, see how things work out on the track and then drive accordingly.

"He is a very versatile horse. He has gate speed and last year we used a lot of that with him. ... This year we have not been doing that as much with him and he has had a little bit of tough luck with some of his trips, where we could not really do it anyway. This just worked out well for us tonight."

Check Six paid $13.40 to win, his second stakes win in a row after an 1-for-11 start to his 4-year-old season. He won in the $200,000 Monument Circle on his prior visit to Hoosier Park last year for trainer Ron Burke and co-owners Weaver Bruscemi, William Switala and James Martin.

Ohio native Brian Brown was at the forefront of a win-win situation Saturday in the $300,000 Carl Milstein Memorial at Northfield Park.

Brown trained 1-to-5 favorite Fear The Dragon, the top ranked Standardbred in North America heading into the one-mile pace. He also sent out 9-to-2 second favorite Downbytheseaside, who survived a first-over trip to defeat his stablemate by a length in 1:49.3, the fastest time ever at Northfield by a 3-year-old pacer.

"I am thrilled this horse raced the way that he did and got there," said Brown. "It wasn’t like Fear The Dragon raced bad."

Fear The Dragon (David Miller) controlled the pace from the rail through modest fractions of :27.1 for the opening quarter mile and :56 for the half. But Downbytheseaside, out and moving from fourth before the half mile, drew even with Fear The Dragon near the 3/4 pole in 1:22.4. The two were inseperable until late stretch when Downbytheseaside forged clear to cap a :26.4 final quarter. Pocket-sitting Classic Pro (Trevor Henry) took a rail shot at the top pair but settled for third.

"I knew he was going to have a lot left with those soft fractions," said winning driver Brian Sears. "I didn’t want to have a speed duel."

Brown has another good problem to look forward to. He indicated that both colts will be pointed toward the Little Brown Jug in September at the Delaware County Fairgrounds.