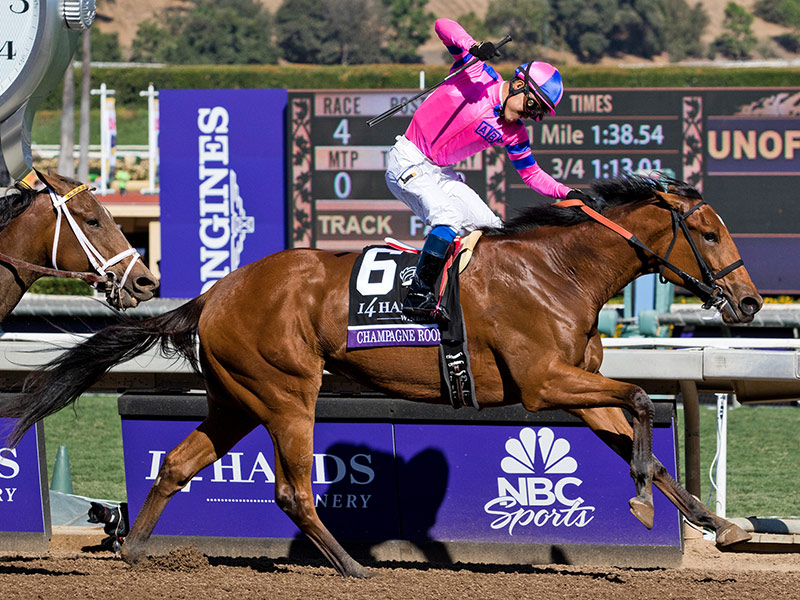 I dig the 2-year-old stakes late in the season, post-Breeders’ Cup. We put so many eggs into the Breeders’ Cup Juvenile basket, but in reality most years that accounts for only 8-12 contenders in the freshman class. The feel in recent years is that top juveniles aren’t being thrust into action as early as the summer boutique meets as once predicated.The November-December calendar leaves plenty of juvenile stakes action still in 2019 before we welcome the 3-year-olds of 2020. Every weekend between now and the end of the calendar year has a race for the 2-year-old colts that I’ll be watching. Here’s the rundown:Nov. 16 Grade 3 Bob Hope at Del MarBob Baffert has won this race 3 of the last 4 years and was runner-up in the other bid. It’s not always an A-lister, but usually gives us something toward the early season SoCal stakes like Mucho Gusto a year ago; and Mastery in 2016 sure had the meteoric potential before sidelined. The November 16 schedule also includes the James F. Lewis at Laurel Park.Nov. 23 Jean Lafitte at Delta DownsSince the lucrative Delta Downs Jackpot went away after 2016, the mid-south has had some void in the juvenile ranks. The Jean Lafitte is a $100,000 opportunity over a 2-turn mile to see what Steve Asmussen, Tom Amoss, Joe Sharp and the like may have toward Fair Grounds’ Lecomte and beyond.Nov. 30 Grade 2 Kentucky Jockey Club at Churchill DownsWith Tiz the Law perhaps the most promising member of this freshman class, the 1-1/16 miles Kentucky Jockey Club could have championship implications this year. It’s been since Super Saver in 2009-’10 that the Derby winner played a home game in this event, but it’s always attention-worthy.Nov. 30 Smooth Air at Gulfstream ParkOpening weekend of the Championship Meet at Gulfstream Park offers a couple of 2-year-old stakes at various distances, surfaces and genders. But it’s the Smooth Air for the colts at a 1-turn mile that interests the trail most. It’s a prelim toward the Mucho Macho Man in January and the lucrative Xpressbet Florida Derby series. This weekend’s action also includes the Dec. 1 Grade 3 Cecil B. DeMille at Del Mar on turf.Dec. 7 Grade 2 Los Alamitos FuturityThis is the big one left for the year on the west coast. The Santa Anita Derby series’ top contender or two often emerges here. Baffert has won the last 5 with Dortmund, Mor Spirit, Mastery, McKinzie and Improbable. Not a bad lineup.Dec. 7 Grade 2 Remsen at AqueductA Super Saturday for the juveniles continues with New York’s top 2-year-old route offering of the season. The Champagne and Hopeful are around 1 turn. The 1-1/8 miles Remsen is our first regional sense for distance. Its race winner often is over-inflated in the public eye, but we’re still glued to watching. It’s been a long time since Thunder Gulch (1994-’95) sweeping the Remsen and Derby. The December 7 action also includes the Gold Rush at Golden Gate Fields and the Maryland Juvenile Championship at Laurel ParkDec. 15 Springboard Mile at Remington ParkThe south’s richest 2-year-old test at $400,000 sets the table for Oaklawn’s Arkansas Derby series, influences the Louisiana Derby trail and has become a more popular stop for California, Kentucky and New York outfits. Recent history tells us to keep an eye not necessarily on the winner, but those showing distance potential underneath.Dec. 21 Sugar Bowl at Fair GroundsWhile only 6 furlongs and for $75,000, the Sugar Bowl can serve as a pseudo non-winners of 2 allowance for autumn maiden breakers looking for something developmental towards the Louisiana Derby series. Jinks Fires has gotten some mileage out of this race with the likes of Archarcharch and Gray Attempt last year with transfer success to Oaklawn. And a good sprinter can emerge here like Hog Creek Hustle a year ago.Dec. 28 Heft Stakes at Laurel ParkLaurel Park gets last call on the 2-year-old division in the final weekend of 2019. This $100,000 event at 7 furlongs rose its profile last year. Alwaysmining began his march toward a Preakness berth in this race when holding off Win Win Win, who would make a name for himself at Tampa on the trail and wind up in the middle jewel as well.