Crimson Tide Have Nothing on this Alabama 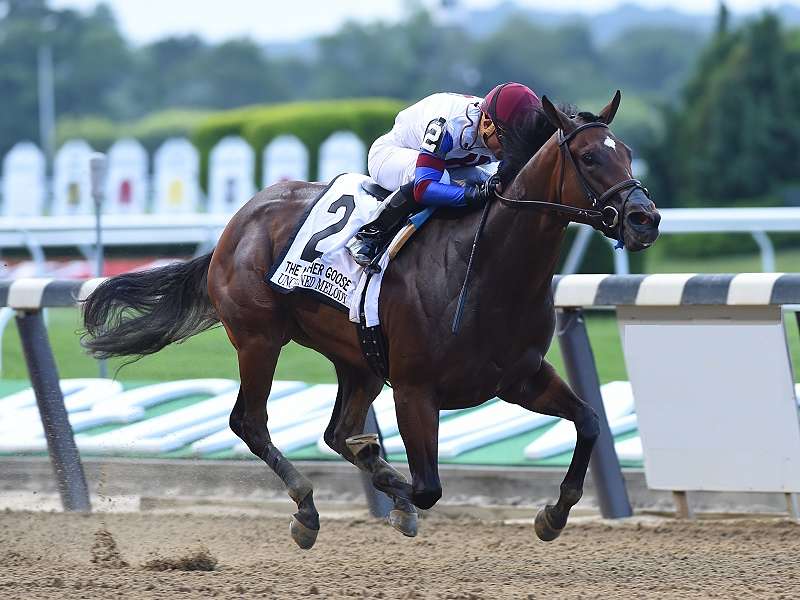 While next Saturday’s Travers understandably takes center stage at the Saratoga meet, this Saturday’s sister race, the Grade I Alabama, drew what has to be the deepest and most intriguing group of 3-year-old fillies we’ve seen this year. No one in the field of nine can be dismissed, and value should abound wherever you land. So, with that in mind, let’s take a look at the group (from the rail out) for the 1 ¼-mile test.

#1 New Money Honey: The reigning Breeders’ Cup Juvenile Fillies Turf winner will try the main track for the first time, but she’s by Medaglia d’Oro and out of a Distorted Humor mare, and is trained by Chad Brown, so there’s a lot to like in this corner. She’s also proven plenty versatile, and should be close to what looks like a very tepid early pace. The worry is that you never get fair value on this barn, and she’s spotting a ton of dirt experience to a solid, if relatively unspectacular, crew.

#2 Holy Helena: It’s tough to call the Queen’s Plate winner a wildcard, but this gal really is, as she’s done her best running against overmatched fields on Woodbine’s Tapeta surface. Yes, she does own a dirt win at Belmont Park, but that was against maidens, none of which have distinguished themselves since. You’ll also get a bit of an underlaid price here, and while she is the lone miss in here to win at the distance, she’s really getting the acid test today.

#3 It Tiz Well: You don’t often get $20 or so on a Jerry Hollendorfer-trained filly in a GI race, but that’s probably what you’re getting on the grade III Delaware Oaks winner. She’s never been better and is rapidly improving, but you better demand that price and then some, as this is a big step up in class.

#4 Lockdown: Very tricky read had a “someone had to be 2nd” feel to her behind today’s likely favorite Unchained Melody in the grade I Mother Goose at Belmont last time, and more often than not she’s disappointed, so you better tread lightly here, especially since she may be at the mercy of the pace, which looks slow and potentially uncontested.

#5 Unchained Melody (pictured): The “now” horse looked awesome wiring the Mother goose in fast time but don’t forget that was a one-turn 1 1/16 miles at Belmont, and now she stretches way out and goes two turns for the first time too. It’s also worth noting the usually very sharp Brian Lynch has had a rough meet and is still looking for his first win. If this daughter of Smart Strike is 3 clear off the far turn, she’ll be tough to trust, but with Partner’s Hero on the bottom, while being asked to do something new for the first time, you’re allowed to play against the chalk.

#6 Salty: Underachiever has had dead aim more than once and come up empty, though she does get a boost with divisional lead Abel Tasman passing today, but she always seems to find one or two better in these big spots. Also, like Lynch, Mark Casse is ice cold at the meet and has constantly settled for minor awards, so at a distance that doesn’t look like her cup of tea, it’s probably best to pass.

#7 Elate: Dangerous filly was a huge disappointment throughout her career but finally stepped up to the place in the grade I Coaching Club American Oaks here last time, and just missed to Abel Tasman, so if she can duplicate or more forward off that run, she’ll be a handful. And it’s worth noting Bill Mott has said all along the 1 ¼ miles will be to her liking more than most, which is a big deal in a race where a lot of these could struggle late. Fair value will lie elsewhere, but she is the horse to beat and most likely winner.

#8 Mopotism: Longshot will probably be the biggest price on the board and couldn’t win the grade III Indiana Oaks at evens, so winning here seems highly unlikely. If nothing else, she is by Uncle Mo out of a Bernardini mare, so the 1 ¼ miles should be within her scope.

#9 Actress: Price player didn’t draw well, but has come a long way in a short period of time but was only 3rd in the Delaware Oaks and has no speed at all, and if It Tiz Well isn’t the one, it’s tough to love this filly’s chances. Plus, with Irad Ortiz and John Servis teaming up, you won’t get the right price to find out if she’s up to this task.

As handicappers, we love a puzzle, and Saturday’s nine-horse Alabama is the ultimate test. While I have a lot of respect for the talent of New Money Honey and the recent win by Unchained Melody, Elate seems to get all the best of it today, so I’ll give her a very tepid nod.