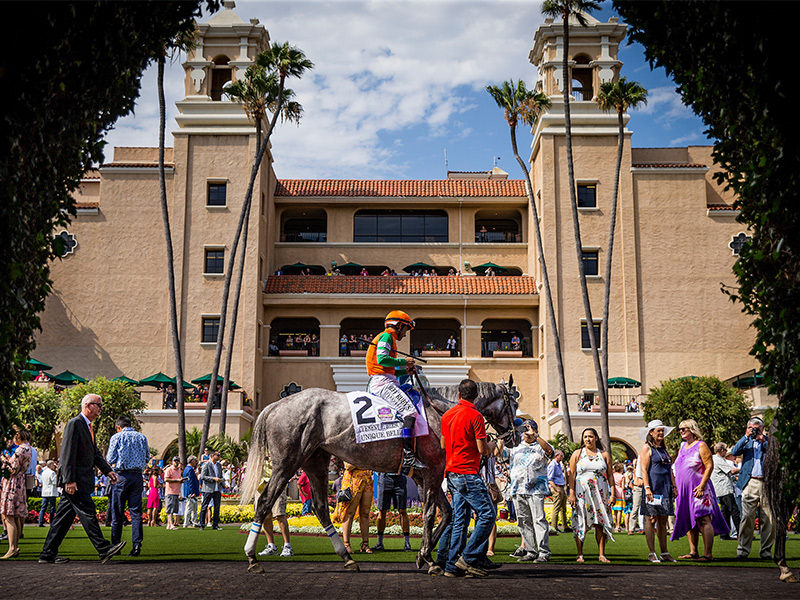 Specifically designed for the rolling exotic player, Jeff Siegel’s “Daily Analysis & Wagering Strategies” isolates those horses that should be included in daily doubles, Pick-3s, Pick-4s, Pick-5s, and the Pick-6.

It is recommended that Jeff’s selections be used to augment the reader’s own personal handicapping, though excellent results can be achieved by applying the exact rolling exotic strategy specified by Jeff’s analysis. Jeff’s recommended plays are intended for players with a moderate budget; however, readers are encouraged to adjust Jeff’s wagering strategy to fit their preferred investment level.

The selections are available every racing day no later than 9 a.m. (PST). For updates, please follow us on twitter @jsiegelracing.

Forecast: Color War was eight lengths clear of the rest when second with a career top speed figure vs. similar at this one-mile trip last month at Santa Anita. A repeat of that race today probably lands the A. Sherman-trained gelding in the winner’s circle. The main concern is that he’s drawn outside of eight, and with the short run into the clubhouse turn there’s a distinct possibility that he’ll have to overcome a wide trip. Knifes Edge drops from maiden $50,000 to this maiden $32,000 level following a distant third place effort over this track and distance 15 days ago. He switches to M. Gutierrez and projects to be close up throughout. These are the two we’ll be using in rolling exotic play with Color War the preferred top pick.
*
*
RACE 2: Post 12:30 PT. Grade: B+
Use: 2-Alms; 6-Overjoyed; 12-Princesa Caroline

Forecast: Princesa Caroline was so impressive breaking her maiden at first asking for C. Brown in New York that we thought she had an excellent chance to step up and win the Breeders’ Cup Juvenile Fillies Turf. A minor issue surfaced and she wasn’t able to make the race, but we assume she’s fit and ready today following a cross country flight for this Grade 3 turf stakes with J. Castellano making the trip to keep the mount. She’s drawn a bit farther outside than we’d prefer, but if the daughter of American Pharaoah is a good as we think she is the poor post won’t get her beat. Overjoyed is progressing very well for N. Drysdale, and like Princesa Caroline should be a major player following a visually pleasing maiden grass victory over a distance of ground. The daughter of Medaglia d’Oro has good tactical speed and should draft into an ideal second-flight trip under M. Smith and have every chance kick on from the quarter pole home. Alms is an unbeaten City Zip filly fresh from a grass sprint win in the Matron S.-G3 at Belmont Park in early October. There’s no reason she won’t handle a mile, and the first-time Lasix user projects to be prominent throughout from her comfortable inside draw. In a deep, competitive affair, these are the three we’ll be including in our rolling exotics with preference on top to Princesa Caroline.
*
*
RACE 3: Post 1:00 PT. Grade: B
Use: 3-Shuster; 5-Square Deal; 9-Riding With Dino

Forecast Shuster won at first asking in strong fashion and earned a speed figure that makes him tough right back. The L. Powell-trained son of Curlin to Mischief didn’t break too well in his debut but flashed good zip to establish the running and then provided a second move when asked, winning like a useful type. F. Prat rides him back, so we’ll put him solidly on top. Riding with Dino is comfortably drawn outside and is in good form, having broken his maiden for a $50,000 tag over this main track three runs back and then finishing second in two first-level allowance sprints as the favorite. He’ll be on or near the lead throughout again today but based on his most recent two starts may be suspect under pressure in the final furlong. Square Deal was a two-time stakes winner over the Del Mar main track during the summer meeting but didn’t progress in a pair of subsequent outings while earning numbers that have stagnated. We’ll include him on a ticket or two in rolling exotic play due to the horse-for-course angle but there are others in here - specifically Shuster - that may have a more upside.
*
*
RACE 4: Post 1:32 PT. Grade: B+
Use: 2-Lostintranzlation; 6-Keeper Ofthe Stars

Forecast: Keeper ofthe Stars outclasses this field but she’s unproven over a mini-marathon trip, so it’s hard to take a short price on the daughter of Midnight Lute in this this year’s edition of the Red Carpet H.-G3. A smart winner from off the pace in the Autumn Miss S.-G3 over a mile at Santa Anita last month, the J. Wong-trained 3-year-old continues to impress in the morning and will beat this field if she can drop her head, switch off, get some cover and then show her exceptional turn of foot from the top of the lane to the wire. There’s value at or near her morning line of 3-1, but we suspect she’ll go lower. Lostintranzlation has won over this course and distance in the past (though not at this level) and seems certain to be the controlling speed. If not respected, the daughter of Lucky Pulpit could take this field a very long way. Both should be included in rolling exotic play; we’ll have extra tickets keying Keeper ofthe Stars on top.
*
*
RACE 5: Post 2:03 PT. Grade: B-
Use: 5-Cabin John; 6-Platinum Equity

Forecast: Platinum Equity is a tough, durable gelding exiting a starter allowance/optional claimer at Santa Anita last month in which he finished second at 40 cents on the dollar despite having every chance when it counted in the final furlongs. On pure numbers he should be able to make amends today in this similar affair, though low-profile connections may be a cause for some mild concern. Cabin John isn’t as fast on speed figures as ‘Equity but he’s a perfect one-for-one over the Del Mar main track and has been popular at the claim box lately, changing hands in three of his last five starts. The Gio Ponti gelding has a good stalking style that ensures a smooth, easy trip, and a healthy series of workouts since his most recent outing to indicate that he’s ready for a top effort. We’ll try to survive and advance using just these two in rolling exotic play with Platinum Equity getting a very slight edge on top.
*
*
RACE 6: Post 2:33 PT. Grade: B
Use: 4-Om; 5-Sacred Life; 7-Prince Earl

Forecast: Sacred Life, never worse than second in three starts since joining the C. Brown barn from France, most recently was quite impressive winning an overnight affair at Keeneland last month and based on speed figures appears more than capable of standing a successful raise in class to this Grade 2 middle distance grass affair for older horses. He’ll get the patient ride he needs from J. Castellano and with a decent pace and good racing luck should be along in time. Prince Earl shows back-to-back triple-digit Beyer speed figures since returning off a layoff for P. D’Amato and is strictly the one to beat. Winner of the Del Mar Mile over this turf course in August and then running equally as well when the third nose on the wire in the City of Hope Mile-G2 in early October at Santa Anita, the son of Paddy O’ Prado seems better than his morning line of 5-1 and is a “must use” in your rolling exotics. Om, a fast-finishing second in the Breeders’ Cup Turf Sprint-G1, probably is most effective around one turn but is good enough on his best day to act at this level at this distance. At 8-1 on the morning line he’s another that might leave at a bit of an overlay and is worth tossing in somewhere.
*
*
RACE 7: Post 3:03 PT. Grade: B+
Single: 9-Golden Principal

Forecast: Golden Principal has trained like an excellent prospect for B. Baffert and looks fit and ready to win at first asking, assuming she breaks with her field (debut runners don’t always do). From the first crop of the exceptional young stallion Constitution, she was purchased for $200,000 at the OBS April Sale and hasn’t missed a beat since shipping west to join the B. Baffert barn, which hits at an amazing 42% with first time starters. Drawn comfortably outside and at a reasonable 3-1 on the morning line, she’s a strong straight play and rolling exotic single.
*
*
RACE 8: Post 3:33 PT. Grade: B+
Use: 1-Mo Forza; 9-Standard Deviation

Forecast: Mo Forza was a little late figuring things out, but after breaking his maiden in fast time two runs back in his sixth career start, the son of Uncle Mo has really gotten his act together. There was nothing flukish about his highly rated 18-1 upset victory in the Twilight Derby at Santa Anita earlier this month and we’re expecting a similar effort today from the P. Miller-trained colt. From the rail ‘Forza should be able to secure an ideal ground-saving, pace-stalking trip under P. Lopez. Standard Deviation, winner of the Jersey Derby at Monmouth Park in August and an excellent third (beaten less than a length) at 11-1 in the Hill Prince S.-G1 at Belmont Park last month, arrives with good credentials for the always-potent C. Brown/Johnny V. team. If he can continue to progress, the son of Curlin can outrun his morning line of 6-1. In a tough, deep, and highly competitive edition of the Hollywood Derby, we’ll use both in our rolling exotics, but if you feel the need to spread a bit deeper, go right ahead.
*
*
RACE 9: Post 4:05 PT. Grade: C+
Use: 2-Eskimo Roses; 4-Saddle Bar; 5-Reedley

Forecast: Here’s a spread race, a $16,000 restricted (nw-2) claimer at the abbreviated sprint distance of five and one-half furlongs. Saddle Bar may be as good as any; the lightly raced Tapizar gelding has steadily rising speed figures and most recently finished second in a similar spot after pressing the pace throughout. Freshened since early September and showing an excellent series of recent workouts, the R. Hess, Jr.-trained 3-year-old graduated over the Del Mar main track two runs back, so we know he likes the track, and probably has further improvement in him. Reedley turns back in trip, returns to the main track (over which he broke his maiden) and makes a major switch to F. Prat. He’ll probably draft into a good pace-stalking position and have dead aim when it matters. Eskimo Roses shows up in a seller for the first time after a series of turf sprint and should greatly appreciate the class drop. He’s a fairly quick type and will take them as far as he can.
*
*
RACE 10: Post 4:33 PT. Grade: B
Use: 2-Eddy Forever; 5-Forever Poe; 13-Tizamagician

Forecast: This highly competitive turf miler for 2-year-olds has a number of possibilities. We’ll go three-deep and hope that’s enough. Eddy Forever continues to look terrific in the morning for B. Baffert and should enjoy this return to grass. The son of Medaglia d’Oro projects to inherit a perfect ground-saving position and have every chance to display his excellent late kick from just off the pace. If he’s going to develop into a good colt, today would be a good day to show it. Forever Poe arrives from Belmont Park where he finished a solid runner-up in his debut sprinting on grass last month. We’re expecting he’ll produce a forward move with that effort behind him and this stretch out in trip. The son of Colonel John brought $850,000 at Timonium in May and is bred to improve with experience and distance, so his connections have reason to be optimistic. Tizamagician is drawn farther out than we’d prefer but still must be considered a major contender. He’ll add blinkers for the first time after finishing second at 60 cents on the dollar in a main track miler earlier this month at Santa Anita and while he was disappointing last time out his speed figures remain strong. The R. Mandella-trained son of Tiznow isn’t necessarily bred to improve on grass but you might as well give him a chance.